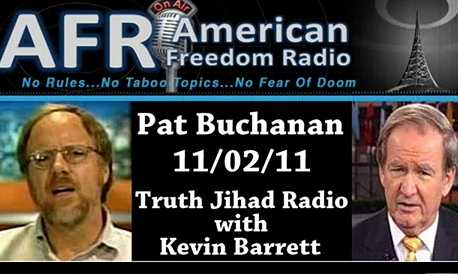 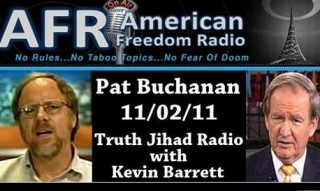 Cheney’s 1% Doctrine Revisited, or: Why Pat Buchanan Should Choose His Friends More Carefully

According to Ron Suskind, Dick Cheney launched the Global War on Terror via “the one percent doctrine”:

“If there’s a 1% chance that Pakistani scientists are helping al-Qaeda build or develop a nuclear weapon, we have to treat it as a certainty in terms of our response. It’s not about our analysis … It’s about our response.”

Slapping an arbitrary 1% probability on a nonexistent but scary-sounding threat – why not space aliens, hare krishna terrorists, or giant mutant insects – and spending the rest of our lifetimes throwing trillions of dollars at it, is not a wise use of the dwindling American treasury. If Cheney meant what he said, he is obviously insane.

Or maybe not. Translated from the BS, what Cheney apparently really meant was:

So according to my esoteric reading of Cheney’s 1% doctrine, the man is not insane. He’s just stark, raving, bat-shit bonkers.

Pat Buchanan, a smart man who is right about many things, thinks I’m the one who’s bonkers. He tells me his good friend Dick Cheney would never do such a thing.

Pat, how well do you really know Dick Cheney? Well enough to go hunting with him? Or maybe too well?

Do you really think Cheney, if he decided to go to war and plan on losing, say, 10,000 Americans, wouldn’t sacrifice 3,000 to get the war off on the right foot? After all, you told me you’re aware that FDR sacrificed nearly that many American lives at Pearl Harbor, to launch a war and gain a huge strategic advantage.

And if Cheney made that decision, and carried it out, do you really think he’d tell you? You’re moral man, Pat – a practicing, believing Catholic. You’ve made a career of insisting that morality has a role in politics. The same cannot be said of Dick Cheney.

If you really, honestly think Cheney wouldn’t do something like that, maybe you’re just as batshit bonkers as he is.

That would explain why such a smart guy as you, who understands the banksters’ controlled demolition of the US economy, the futility of the wars on Iraq and Afghanistan, the crucial role of demographics and religion in history, the impending collapse of the US empire, and so many other things, can actually believe that the Global War on Terror is real.

Listen up, Pat: Even if you haven’t done your homework on 9/11, even if you still believe it was done by 19 drunken, whoring, pork-chop-loving cokehead gambling fiends led by a radical Muslim on dialysis in a cave in Afghanistan, even if you think the Trade Center blew itself to kingdom come due to a couple of relatively modest fires, even if you think the US military weaponized anthrax false-flag follow-up was unconnected to the main event, you still must admit, if you have even one sane brain cell in your head, that the massive success of such a “19 hijackers” plot would be a one-in-a-million freak occurrence, and that the average American is more likely to be hit by lightning than to be killed by terrorists. Therefore the War on Terror is an Orwellian hoax. It really is that simple.

Still don’t get it? Let me put it another way, Pat. When our forefathers fought the American Revolution to give us the Bill of Rights, the average life expectancy was, at best, 45 years. Today, it is 78.1 years.

Our ancestors were not cowardly, fear-obsessed people. When they chose to fight the British, they were willing to reduce their modest life expectancies by considerably more than 1%.

If “radical Islamic terrorism” threatened to reduce our 78.1 year life expectancy to something significantly below the 45 years of those who risked their lives to give us the Bill of Rights, a sane, patriotic person might be willing to temporarily suspend some of those rights – perhaps even to let the President order the extrajudicial murder of an American citizen.

So Pat, please come on board with the Second American Revolution – the Freedom Revolution. It is our shared commitment to the freedoms embodied in the Bill of Rights, and not “our” whiteness or Christianity or imperial control of the planet, that holds our society together. By allowing our leaders to burn the Bill of Rights, we are committing collective suicide.

This is the real suicide of the American superpower, Pat. And by supporting the bogus War on Terror, you’re right out there with the crowd of worthless, cowardly scum chanting “Jump! Jump! Jump!”