Home World Is the Guardian Britain’s Most Twisted Newspaper? 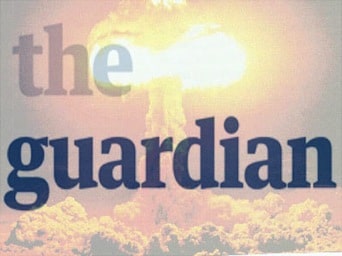 The Guardian Angel of Israel

Israeli hasbara insists that an attack on Iran is compatible with both Western interests and NATO strategy. For example, this week Israel released information about an IAF exercise in NATO’s bases in Italy.

The statement was made to create the impression that any future Israeli aggression against Iran enjoys Western backing.

NATO however was quick to disassociate itself from any such attack. NATO leader Fogh Rasmussen confirmed in a press conference that the alliance has no intention whatsoever of intervening in Iran.

To date, we’ve not seen any British public official statement that would suggest that Britain is ready to back either the US or Israel in any possible strike on Iran.

Yet, it seems as if the Guardian, once a respected British newspaper, has already become fully integrated in the Israeli psychological war machine.

Yesterday the Guardian joined the hasbara chorus and informed us that the UK military has ‘amid fresh nuclear fears’ stepped up plans for an attack on Iran.

The Guardian didn’t even try to substantiate its claim. Instead, it produced a gossipy news story that didn’t adhere to the most minimal journalistic standards.

The Guardian reported that “British officials say that if Washington presses ahead it will seek, and receive, UK military help for any mission, despite some deep reservations within the coalition government.”

This is a somewhat bizarre statement considering the complete silence of the Government and the MOD on the matter. Could Britain launch another criminal war, (this time, potentially a nuclear world war), with no public discussion or even a single official government comment on the subject? I don’t think so.

Did the Guardian make it up?  I doubt it – it’s just suspiciously too damn similar to the official Israeli hasbara line.  On the face of it, it looks as if the Guardian has, quite simply, joined the Israeli war machine.

Interestingly enough, the JC, Britain largest Jewish weekly was a bit more reliable than the Guardian. The JC wrote that,

While the JC still seems to maintain some journalistic integrity, this week the Guardian failed miserably. It was caught, whether consciously or unconsciously, disseminating Israeli propaganda. But this shouldn’t take us by complete surprise. As we know, this same ‘progressive’ paper also censored  Wikileaks concerning Israel and Palestine.

Like 80% of our ruling party MPs, who just happen to be CFI members (Conservative Friends of Israel), the Guardian also seems to be in open alliance with the Jewish State. I guess that friendship with Israel must really pay.

You can now order The Wandering Who on Amazon.com  or Amazon.co.uk