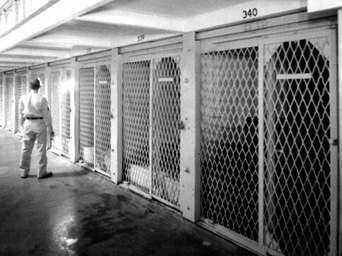 The latest report by the American Civil Liberties Union(ACLU) is not likely to inspire politicians to shut down our private prisons when prison operators are pouring millions of dollars into their campaign coffers.

Jobbing out the incarceration business, said lawyer David Shapiro of the ACLU Prison Project “has been a bonanza for the private prison industry, which rakes in billions of dollars a year and dishes out multi-million dollar compensation packages to its top executives.”

And those top executives, in turn, between 1998 and 2000, for example, wrote over $1.2-million in checks to political candidates and political parties. And why not, when their firms have received such huge public subsidies as $68 billion in tax-free bonds to help them build?

Since the 1980s Reagan era shift to privatization, more than 150 private facilities—detention centers, jails, and prisons—-with a capacity of about 120,000 have been opened, and 7% of all U.S. adults inmateshave been dumped in them.

“One study found 49% more prisoner-on-staff and 65% higher prisoner-on-prisoner assaults in private medium and minimum security prisons than in public ones,” Rosenthal writes. Example: at the Northeast Ohio Correction Center in Youngstown, operated by industry leader Corrections Corporation of America(CCA), in a period of just 14 months there were 13 stabbings, two murders and six escapes that ended in violence. Rosenthal said other sociologists have documented “many other examples of brutality and incompetence perpetrated in CCA-run facilities.”

Since private prisons prosper in proportion to the number of prisoners they house, “the suspicion remains that they may hold on to prisoners, particularly ones who are not troublesome as a means to earn extra money,” Rosenthal writes. Even when operators do not directly control discharge decisions, she notes, “by controlling record-keeping about prisoners’ behavior they can have a determining role in establishing when a prisoner is to be released or paroled.”

The ACLU report, titled, “Banking on Bondage: Private Prisons and Mass Incarcerations,” was released Nov. 2 and traces the rise of the for-profit prison companies that have “capitalized on the nation’s addiction to incarceration (2.4-million behind bars) to achieve gigantic profits.”

“The crippling cost of incarcerating increasing numbers of Americans has saddled government budgets with rising debt and exacerbated the current fiscal crisis confronting states across the nation. Yet the two largest private prison companies alone obtained nearly $3 billion in revenue in 2010,” the ACLU statement said.

It noted that Arizona is seeking to add 5,000 more private beds despite its own Auditor General’s finding that for-profit imprisonment may cost more than jailing them in public facilities.

The ACLU report asserts that mass incarceration “wreaks havoc on communities by depriving individuals of their liberty, draining government resources and bringing little or no benefit to public safety.” The biggest losers in the privatization fiasco, apart from the taxpayers, are members of the Afro-American and Hispanic communities whose harsh sentences for minor crimes are filling many prison beds. Many marijuana prisoners are doing harder time than white collar criminals.

“It is imperative that we halt the expansion of for-profit incarceration,” Shapiro said, as “The private prison industry helped create, and continues to feed off, the social ill of mass incarceration.” He concludes, “Private prisons cannot be part of the solution—economic or ethical—to our nation’s addiction to incarceration.”

To “halt the expansion” of private prisons is an urgent first step—as long as it is quickly followed up by closing every one of them now in operation. This would be a fine project for church groups and civic associations. And one way to find beds for private inmates would be to set free the hundreds of thousands of prisoners doing time for victimless crimes such as marijuana possession and to transfer others who rightfully belong in mental institutions, not behind bars.

Sherwood Ross is a Miami-based public relations consultant who writes on political and military topics. He formerly reported for the Chicago Daily News and contributed regular news columns to wire services. Reach him at [email protected]