Home Veterans Few Guantanamo Prisoners Ever Get Their Day In Court 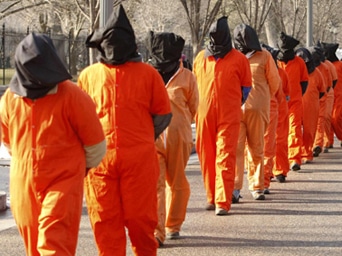 Far from issuing the executive order he promised to shut down the prison at Guantanamo, President Obama is keeping virtually all of its prisoners confined in limbo without trials.

Just as illegal, he is reviving discredited military commission trials set up in 2001 by the Bush regime for the handful of suspects who might ever get their day in court. During his run for the White House, Obama had been critical of the military trials.

Human Rights Watch said the continued use of such trials “is a grave mistake” and given their “substandard procedures and tainted history” HRW does not believe that their judgments “will be perceived as legitimate, either domestically or internationally.”

Of the approximately 800 suspects brought to Guantanamo, and I emphasize the word suspects, only an astonishingly few six cases have proceeded to trial, even though many prisoners have been confined there for five years or longer. Three cases went to trial under Bush and three under Obama while a seventh man, Abd al-Rahim al-Nashiri was arraigned just the other day.

As Alexander Cockburn pointed out in the October 24th issue of The Nation, Obama said “that his advisers had told him that some prisoners at Guantanamo may be too dangerous to release. Though there was insufficient evidence to build a case, they would be held indefinitely without charge or trial.” Imprisonment for life without trial?

According to British historian/journalist Andy Worthington, author of the book “The Guantanamo Files: The Stories of 774 Detainees in America’s Illegal Prison,” only 171 prisoners remain today. That only six men have ever come before a judge in all this time establishes U.S. jurisprudence as truly no jurisprudence at all, but a cynical system of imprisonment where men are illegally arrested, illegally transported, illegally confined and illegally tortured until they illegally confess.

That the majority of Guantanamo prisoners—600 souls—had to be let go reveals the entire premise of the so-called “War on Terror” was as false as the charges against them were fraudulent.

Worthington points out U.S. authorities have redefined the very term “war crimes” to equate “minor acts of insurgency committed by a citizen of an occupied nation with terrorism.” Some cases against the men former Defense Secretary Donald Rumsfeld called “the worst of the worst” are so flimsy and the men have been so inhumanely mistreated that the White House apparently prefers them to be tried in Cuba out of public sight.

Example: Abd al-Rahim al-Nashiri, a Guantanamo prisoner, “is being prosecuted at the (military) commissions because of the torture issue,” his court-appointed Navy military lawyer Lt. Comdr. Stephen Reyes told The New York Times. Worthington reports the suspect was threatened with a gun and a power drill in a CIA prison in Thailand and was moved to a CIA prison in Poland and later subjected to waterboarding torture.

Asked to comment on the legality of military commission trials, international law authority professor Francis Boyle of the University of Illinois, Champaign, said, “The United States Supreme Court ruled in the Hamdan case (Hamden vs. Rumsfeld, June 29, 2006), that these Gitmo military commissions violate Common Article 3 of the Four Geneva Conventions of 1949 and are thus a serious war crime for everyone authorizing or participating in them except the criminal defense attorneys. If these Gitmo Kangaroo Courts actually sentence someone to death and execute him, it would constitute a “willful killing” and thus a Grave Breach of the Geneva Conventions mandating universal prosecution for all involved except defense counsel.”

Boyle added, “America would then have its first Nazi-style Death Camp on Guantanamo. There would then be no end to this Gitmo conveyor-belt of murder. Eventually, even U.S. Citizens alleged to be terrorists would be sent to Gitmo to be murdered by these Stalinist show trials. For these reasons, Gitmo must be shut down and all of its prisoners transferred to the jurisdiction of the United States Article 3 Federal Criminal Court System.” Boyle is the author of “Destroying World Order: U.S. Imperialism in the Middle East Before and After September 11(Clarity Press).

Calling for prisoners to receive trials in Federal courts, the American Civil Liberties Union said, “Where credible evidence exists against Guantanamo detainees, they should be charged and prosecuted under our criminal justice system, which has a successful record of prosecuting terrorism suspects and is the only way to provide the fair and reliable outcomes that Americans deserve.” The ACLU blasted “the indefinite detention of prisoners at Guantanamo, some of whom have been held in U.S. custody without charge or trial for as many as eight years.”

It should be kept in mind the U.S. has parallel operations to Guantanamo ongoing in Iraq and Afghanistan, where thousands of suspects have been detained without trials, and often tortured without mercy. If these crimes, under U.S. direction, are not terrorism, what is?

Sherwood Ross is a Miami-based public relations consultant “for good causes” who writes on political and military topics. Reach him at [email protected]