Home Veterans Iraq Vets Against the War Board of Directors Releases Official Statement on... 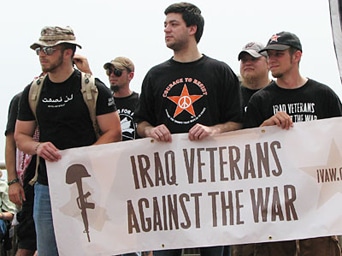 We are the 99%, organization says

Most of our military is made up of the 99%.  We join the military for many reasons.  Some join because of family tradition or a sense of patriotism.  Others join for citizenship, education or to escape poverty or violence in our homes and neighborhoods. Many service members realize the wars we fight contribute to poverty and violence in Iraq and Afghanistan communities. We are coming home to a broken economy where veterans have higher unemployment, incarceration, suicide and homelessness than the national average.

The 1% is profiting from of our sacrifices.

Our nation’s leaders have betrayed us. We have been asked to risk our lives and mental health for the defense of our country and the well being of foreign allies. The causes for military conflict have proven false while corporations profit. The military industrial complex continues to grow in wealth while the rest of the world pays for it in dollars and blood.  Instead of increasing programs to attempt to repair damages, many schools, hospitals, and social services are shutting down.  Programs for veterans are inadequate and are leaving us physically, mentally, and emotionally bankrupt.

Veterans have a history of effective grassroots organizing.

IVAW has been a voice for veterans and their grievances since our founding in 2004.  We understand that change comes about when people speak up, organize, and demand justice. Veterans and active-duty service members have a history of organizing, from the Bonus March to the Vietnam War. Iraq and Afghanistan veterans have an important contribution to make to this movement.

As veterans and members of the 99% we stand in solidarity with the Occupy Movement.

As service members we are told that we fight for human rights and democratic freedoms. However, these rights seem to be continually denied at protests across the nation, often times by police using excessive force and violent tactics.  We support our members, fellow veterans and members of this movement who have been subjected to this gross contradiction, and who have refused to remain silent.

Iraq Veterans Against the War is nonprofit 501(c)3 advocacy group of veterans and active-duty US military personnel who have served in the U.S. Military since September 11, 2001.  IVAW currently has over 1,400 members in fifty states, as well as in Canada, Europe, Iraq and Afghanistan.