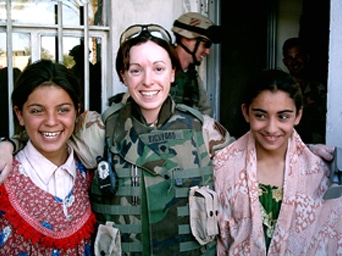 Iraq War Veteran Amber Stone, a native of Claremore, Okla., has always loved to write – from short stories to poems to journal entries and internet blogs.

Her passion for writing has not only brought her joy, it has also helped her cope with both Post Traumatic Stress Disorder (PTSD) and a traumatic brain injury.

Stone, who served with the U.S. Army 3rd Infantry Division in Iraq in 2005-2006, developed PTSD while serving there as a medic.  During her deployment, her job was to treat wounded troops and Iraqi civilians – both during combat patrols in Sadr City and at the Forward Operating Base (FOB) medical aid station.

On a daily basis, she faced enemy fire, gruesome injuries and death.

Stone still struggles with a night in the aid station when she treated a badly wounded Iraqi man who died the following day.  While trying to save his life, Stone became covered in the man’s blood.

Making matters worse, the uniform she was wearing that night was the only one that she had.  Earlier in the day, she had dropped off her other uniforms for cleaning.

“We found out the FOB was out of water and I had to wear that man’s blood on my uniform to chow, everywhere I went for five days until we got enough clean water to clean our clothes,” she said.  “So that really, really messed with me.”

When she returned home, she was angry all the time.

“Nobody wanted to be around me,” said Stone.  “At work, they hated me, I hated myself.  I hated everything.  It took everything I had to get up and go to work for that last year that I was in (the Army).  I was super angry.”

In 2007, while a student at Armstrong Atlantic State University in Savannah, Ga., another student Veteran introduced her to Warrior Writers, a Veteran’s organization that seeks to connect Veterans with each other and also compile Veterans’ writings and art into books, performances and exhibits.

Stone began writing poems about her experiences for the Warrior Writers blog and led writing workshops to help other Student Veterans.

“People don’t realize how therapeutic (writing) can be,” she said.  “Once you put (your thoughts) into something tangible, you can hold and see and feel and touch and read them.”

Unfortunately, Stone had a major setback during the summer of 2010 when she suffered a traumatic brain injury (TBI) from a severe automobile accident.  The honors student failed two consecutive semesters in college following the accident and was forced to put school on hold.

In August 2011, Stone began treatment at JCMVAMC for her TBI.  With VA’s help and the power of her pen, she feels ready to return to school.  In January, Stone will resume her academic studies at Columbia College in Columbia, Mo., where she will major in English and Communications.

She also continues to write for Warrior Writers.  The organization recently published its third anthology and included one of Stone’s short stories in the book.

Stone also has a heart for Veterans.  She wants to start a writing workshop at a VA Medical Center and help Veterans write about their experiences.  Following school, she also hopes to open a free health clinic for Veterans and soldiers and also write grants for organizations that want to help Veterans.