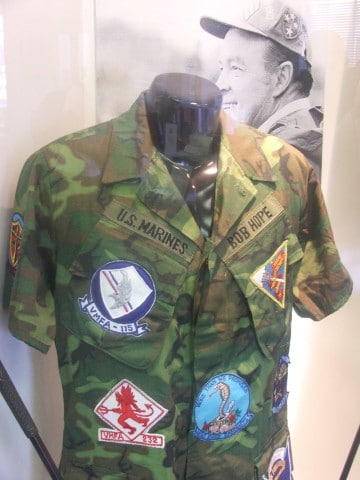 Monday I received an email about Bob Hope. It hardly seems like it was eight years ago when he passed away, and though no Veteran will ever forget him, I thought it would be good for all Veterans to remember what he meant to all of us.

Born in Eltham, London, England, in 1903, Bob Hope stands as a legend among men. He was the first and only “Honorary Veteran of the US Armed Forces”, as declared by the US Congress in 1997, at the age of 93. In two centuries of lawmaking, resolutions and the likes, this was one action that was absolutely appropriate and unlike many Congressional actions, could never be questioned.

Bob was born, Leslie Townes Hope, and found his way to America when his family immigrated to the US in 1908, coming with millions of others through Ellis Island for the hope of a better life. Like many youth who grew up during The Depression, life was difficult, but probably even more difficult for immigrant families. Inevitably some kids just seem to get into trouble, and Hope was no different. As a rebellious young man he was fortunate to have been sentence to the Boys Industrial School in Lancaster, OH which was one notch above reform school, and he took advantage of his second chance.

Most Americans remember Hope as a Vaudeville dancer, comedian, an actor, and best friend of Bing Crosby. In his early years Hope bounced around the Vaudeville circuit entertaining thousands with his humor and dance routines but finally made it to the big screen, bringing to life, his “ski-lift” nose, and tears of laughter to millions with more than 50 movies and theatrical appearances…but every veteran knows the name “Bob Hope” as the man who brought America to the front lines to provide moral support from home.

Bob Hope began his commitment to the troops with his first wartime performance at sea aboard the RMS Queen Mary even before the United States entered World War II. It was September 1939, in a transatlantic crossing, a harrowing feat not for the faint of heart as U-Boats we ever on the prowl. He went to the captain and volunteered to perform a special show for the passengers who were gripped with anxiety and near panic. It proved to be a winning formula which would be applied over and over again during the next six decades of his life, but at the front lines in America’s wars with the bravest of the brave.

His trademark, “Thanks for the Memory” theme song, with rewritten lyrics was performed in his first United Service Organizations (USO) show on May 6, 1941, at March Field, California which became his vehicle to travel and entertain troops in nearly every theater of World War II, and then later during the Korean War, the Vietnam War, the third phase of the Lebanon Civil War, followed by the Iran–Iraq War, and the 1990–1991 Persian Gulf War.

Another trademark of the Hope-USO Troupe, was the gathering on stage of the entertainment ensemble and closing the show by leading the audience in singing Silent Night. To most in attendance, it became the most sobering and solemn moment in time, never to be forgotten. To many who never made it home, it was a proper tribute for their valor. For those who do not know the significance of this Christmas carol, it made the history books by stopping a war if only for a few hours. The story as related from eyewitness accounts retold through the diary of Frank Richards in World War I

On Christmas Eve in December 1914 one of the most unusual events in military history took place on the Western front. On the night of Dec. 24 the weather abruptly became cold, freezing the water and slush of the trenches in which the men bunkered. On the German side, soldiers began lighting candles. British sentries reported to commanding officers there seemed to be small lights raised on poles or bayonets. Although these lanterns clearly illuminated German troops, making them vulnerable to being shot, the British held their fire. Even more amazing, British officers saw through their binoculars that some enemy troops were holding Christmas trees over their heads with lighted candles in their branches. The message was clear: Germans, who celebrated Christmas on the eve of Dec. 24, were extending holiday greetings to their enemies.

Within moments of that sighting, the British began hearing a few German soldiers singing a Christmas carol. It was soon picked up all along the German line as other soldiers joined in harmonizing.The words heard were these: “Stille nacht, heilige nacht.” British troops immediately recognized the melody as “Silent Night” quickly neutralized all hostilities on both sides. One by one, British and German soldiers began laying down their weapons to venture into no-man’s-land, a small patch of bombed-out earth between the two sides. So many soldiers on both sides ventured out, that superior officers were prevented from objecting. There was an undeclared truce and peace had broken out if only for a brief few hours.

So in tuned was Bob Hope with his military audiences that when overseas he almost always performed in Army utilities (fatigues) as a show of support carrying his trusty golf club. And while many have written about the more than sixty USO tours and his commitment to perform his morale boosting miracle, most of us never understood the significance of Silent Night nor could fathom such devotion to duty. To anyone lucky enough to be present at a Bob Hope performance, which always singled out a few lucky attendees with special messages from home, Bob Hope will never be forgotten. Hope’s USO career lasted half a century. John Steinbeck, renowned author and Nobel Peace Prizes recipient for literature, who was working as a war correspondent in 1943 wrote:

“When the time for recognition of service to the nation in wartime comes to be considered, Bob Hope should be high on the list. This man drives himself and is driven. It is impossible to see how he can do so much, can cover so much ground, can work so hard, and can be so effective. He works month after month at a pace that would kill most people.”

For his service to America and to the military in particular, Bob Hope was awarded the nation’s highest honor, “The Presidential Medal of Freedom”, which was created by President Harry S. Truman in 1945. But for all the GI’s who ever served, Bob Hope will forever be remembered as the legendary entertainer and USO Ambassador of Goodwill, who for six decades, brought the USO’s famous “touch of home” and a string of smiles to millions of GI’s often during their most difficult hours. And maybe what makes Bob Hope so important is that he and his Hollywood “band of gypsies” gave the U.S. troops real memories with his words of humor and wisdom…

The 1997 act of Congress signed by President Clinton named Hope an “Honorary Veteran.” He remarked, “I’ve been given many awards in my lifetime — but to be numbered among the men and women I admire most — is the greatest honor I have ever received.”…Amen