Disposal, the Living and the Dead, Veterans, America’s “Unwanted Millions”

Scandal’s are a dime a dozen nowadays, each getting its 15 minutes of notoriety and soon to be forgotten.  When these scandals involve the abuse of veterans, there is something particularly grotesque involved.

Two things hit yesterday.  The Air Force at Dover Air Force Base has been burning the remains of America’s war dead and throwing them in a public dump.  Now they claim the number is 274.  Where that number will go, we have no idea.  Americans were told that President Bush drove out secretly and met every plane, each veteran being carried in a flag draped casket, Bush saluting as the Marine honor guards shuffled down the ramp.

However, when records were checked, it was all lies.  Bush had never been there, he lied, and the honor guard?  What kind of honor guard delivers remains to an incinerator to be thrown onto stench ridden trash heap?

The other issue, one of equal or even greater disrespect toward those who have given so much to America involves homeless veterans.  I received a call from former astronaut,  Colonel “Buzz” Aldrin.  His concern was the treatment of homeless veterans in the Los Angeles area and how he could help.

There is a problem is Los Angeles, one often reported on but one never corrected.  A 365 acre facility in West Los Angeles, adjacent to the exclusive Brentwood “billionaires row,” long ago designated for one purpose only, a home for veterans, has been “chipped away,” stolen bit at a time for exclusive private schools, lent out to industry, to civic groups and even for a supposedly “public” park and rose garden that is locked, heavily guarded at taxpayer expense and America’s veterans are not allowed on.

This is the American Veteran’s Home but it is, in reality, $3 billion dollars of real estate being fought over by well known organized crime figures and protected by an organization known as the Veterans Park Conservancy.

The purpose of this group, as far as we can tell, after nearly 4 years of protests, is to keep sacred veterans land away from veterans and turn it into a “country club” for the rich and famous.  Toward this end, the Veterans Park Conservancy, a group that could be no more “anti-veteran” if it were the Taliban itself, has been very successful. 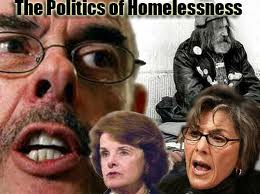 These are the rich and powerful, the people who control Representatives Henry Waxman and Diane Feinstein, filling their campaign coffers with “bankster cash” and keep their focus away from the welfare of the estimated 20,000 homeless veterans, some of whom, are legally required to be housed on this land according to a study financed by the Annenberg Foundation.

Veterans protesting these actions by the VPC have been spied on, threatened and arrested.  Currently, the ACLU is suing the Federal Government for illegal arrests and some of America’s largest lawfirms have a second lawsuit against the government for misuse of the land.

Everything done here by Waxman, Feinstein and their wealthy friends is illegal.

Members of the Department of Veterans Affairs police forces have come forward and testified that they had been ordered to falsify witness statements and make illegal arrests.  Worse still, accounting officers at the Department of Veterans Affairs at the Los Angeles facility have reported a history of criminal fraud on a massive scale, reports made to the FBI.  Lab tests given veterans seeking medical care have been sent to empty offices, phony “front” companies owned by high ranking federal officials who charge for medical tests that are never performed, money not only stolen from the taxpayer but medical tests never run.

Tests never run fail to produce evidence of illnesses which are, of course, never treated.  Veterans die of those diseases, more American heroes to end up on a trash heap somewhere, discarded and dishonored.

Who needs to answer for today’s crimes?

Culprit number one, the United States Air Force.  The Secretary of the Air Force should resign immediately and everyone involved in lying to the press and covering up these acts.

Every one of America’s war dead disposed of in this insidious and disrespectful way should be carefully recovered, the expense of which should be charged against the operating budget of Dover Air Force Base and each of the 274 or 1000 or however many discovered should be interred at Arlington National Cemetery.  Nothing less is acceptable.

All oversight by the Department of Veterans Affairs, oversight which lacks any legal precedent, must also end and the land returned to its only legal purpose.

After billions of dollars spent, lawsuits, dozens of newspaper articles and TV reports, not a single homeless veteran is housed on the land designated for the National Veterans Home.  It still remains a playground for the rich, a place for them to walk their dogs and befoul sacred land, a place for America’s powerful to enjoy, maintained, policed and protected illegally by our own government and a series of well documented officials, some of whom can be tied to criminal acts long reported to enforcement agencies by credible sources and documentation.