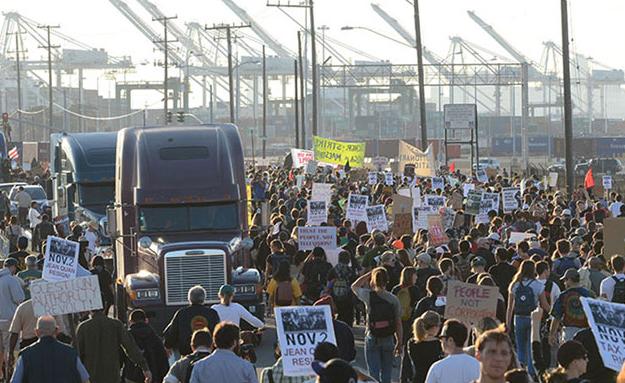 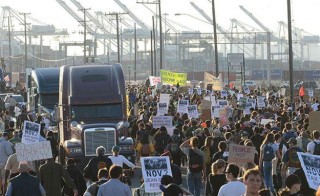 (Sung to: When the Saints Go Marching in’)

Military Veterans Join the 99% in December 12 West Coast Port Shutdown.  Members of Iraq Veterans Against the War to march with 99%, call on fellow veterans, service members to join the movement.

On December 12th, the Iraq Veterans Against the War (IVAW) Bay Area Chapter will march with the 99% as Occupy movements along the West Coast stage mass mobilizations to shutdown the hubs of commerce owned by the 1%.

Members of the IVAW Bay Area Chapter will Occupy the Ports to draw attention to the financial and human costs of the wars, and the ways in which veterans have been impacted by the economic and social issues raised by the Occupy movement.

These issues include the challenges of veterans re-entering civilian life after war and trauma and during economic recession, and looming cuts to veterans’ health care and VA services.

They also hope to help make veterans’ and service members’ participation in this movement more visible and deliberate.

Scott Olsen will join the IVAW Bay Area Chapter to march with the 99% in Oakland, CA—the city in which he was critically injured by a police projectile.

Scott’s decision to demonstrate so soon following a serious injury is symbolic of the Occupy movement’s resilience following a series of nation-wide, coordinated crackdowns against the 99%.

Scott doesn’t plan on backing down, neither does the movement; IVAW will be there, boots on the ground, to occupy the ports and show our support for the 99%.

From Camps to Ports, Wall Street of the Waterfront

The Occupy movement is barely more than two months old and already showing signs of growing up. Seeing their encampments thwarted, they are responding with a coordinated counterpunch themselves.

The Occupy groups in California, Oregon and Washington state are moving together against the US centers of the global economy—the ports of the West Coast that handle some 60% of the country’s international trade—and their 1% owners.

Inspired by the massive participation that shut down the Port of Oakland during Occupy’s “General Strike” Nov. 2, the movement’s chapters in San Diego, Los Angeles, Oakland, Portland, Olympia, Tacoma and Seattle all plan port shutdown actions on Monday, Dec. 12.

They hope to amass picket demonstrations so large that the dockworkers of the International Longshore and Warehouse Union (ILWU), long the radical labor vanguard of the West, will invoke the part of their contract allowing them not to cross the line because it is a health and safety risk.

This type of community picket action for political purposes has a long and venerable place in ILWU history.

Back in 1939 longshoremen honored a picket line set up at the Port of San Francisco by the local Chinese community to stop a load of steel being sent to then-fascist Japan for its war effort, at that time focused on mainland China, but soon crossing the Pacific.

Again it was used in 1977 against a South African ship in protest of that country’s apartheid policies, in 1997 against a ship loaded by scab labor in support of the dockers in Liverpool, England, in 2003 to stop a ship being loaded with war materiel bound for the just-declared war on Iraq.

And most recently just a couple of years ago it was used against an Israeli ship in protest of the Israeli military attack on the Turkish ship bringing medical and construction supplies to Gaza.

This time the Occupiers are doing it to highlight the nasty anti-union tactics of a major international food and grain conglomerate, Export Grain Terminal (EGT), whose majority owner, Bunge Ltd. is a multi-national company busting unions from Texas to Bulgaria to Argentina.

It is also deeply involved with corporate takeover of food systems, displacing local agriculture with soybean monoculture. EGT is trying to break the labor standards and jurisdiction of the ILWU by bringing in scabs to load their grain ships at the Port of Longview.

In Southern California, at the huge port complex of Los Angeles/Long Beach, the Occupy blockades are adding another political target. They will focus on the terminal of one of the worst offenders of the 1% on the Coast—Stevedoring Services of America (SSA)—to highlight the plight of the port truckers.

These “independent contractors,” mostly immigrant workers who haul the shipped containers to warehouses and other points of destination, have been trying to organize into the Teamsters for over a decade so they could bargain and raise their pathetic pay.

But in one of the most telling 99% versus 1% stories, the West Coast employer group, the Pacific Maritime Association (PMA), a group of some 80 multinational, multibillion dollar shipping and stevedoring companies, has been able to thwart them, using US anti-trust laws.

The coordinated action is bold. It could signal a new direction for the Occupy movement: engaging in mass direct actions outside of established institutions to both support local labor practices and strike at the heart of the global economic apparatus.

For a young movement these are some sophisticated maneuvers.

Still, growing pains endure. The ILWU International officers in San Francisco are claiming to have nothing to do with the Dec. 12 action and even oppose it.

On Nov. 21 the union’s officer put out a memo to their members saying that a public demonstration is not a picket line according to the contract and does not have to be respected. This is in contradiction to the historic practice of the ILWU and “The Ten Guiding Principles of the ILWU,” which states:

“Unions have to accept the fact that the solidarity of labor stands above all else, including even the so-called sanctity of the contract.

We cannot adopt for ourselves the policies of union leaders who insist that because they have a contract, their members are compelled to perform work even behind a picket line. Every picket line must be respected as though it were our own.”

On the ILWU website, the union’s International President, Robert “Big Bob” McEllrath, claims such “third party” actions violate the union’s “democratically led process.” Oddly, this statement runs below an earlier, Oct. 5 post by McEllrath, a “solidarity statement in support of ‘Occupy Wall Street.’ There he says

“Like you, ILWU members in Longview have been arrested, beaten and pepper spayed (sic). We know that justice won’t be won by asking greedy employers for permission or waiting for politicians to pass laws.

That’s why we hope that you’ll stand your ground on Wall Street while we do the same in Longview—because An Injury to One is an Injury to All.”

Further irony abounds. Occupiers were inspired by the ILWU longshore workers in Longview taking “direct action” against EGT and its attempts to load grain with scab labor.

The Longview longshoremen literally put their bodies on the railroad tracks, stopping the train and dumping its grain. President McEllrath participated in one of the actions himself, and was arrested by the local cops.

But now, facing a $250,000 fine (that is being appealed) and further court injunctions that include threats of arrest and huge fines on both the union and individuals involved, the ILWU is apparently turning to its attorneys to pull them out of the mess.

Still, the Occupiers didn’t plan this all by themselves. A number of ILWU rank-and-file activists have been working with them and explaining the ropes.

The president of the Longview local, Dan Coffman, has visited Occupy San Francisco and Occupy Oakland, speaking at their demonstrations. He has not publicly called for the port shutdowns, but he has told the crowd in Oakland that they have been an inspiration to him and his members.

In the past this is the kind of community picket the ILWU would have—with a wink—embraced.

The best way to get a rogue employer to stop violating the ILWU’s contractual jurisdiction is to make it costly for other members of the employer group who are playing by the rules, and make them enforce the contract among themselves.

But given the legal noose knotted for them, it seems the ILWU would prefer to control all aspects of this fight rather than build alliances in the community, even if that may hurt them in the future.

They are planning their own Coastwise port shutdown when EGT’s first grain ship docks in Longview, currently scheduled for sometime in early January.

We will soon see if Occupy can mobilize enough people to create the critical mass necessary to invoke health and safety—especially at the distant and huge LA port—what tactics the police will use against a serious economic challenge, and how the ILWU rank-and-file longshore workers respond.                     Editing:  Jim W. Dean

Steve Stallone is the Secretary of the Pacific Media Workers Guild. He was the Communications Director of the ILWU from 1997-2007.