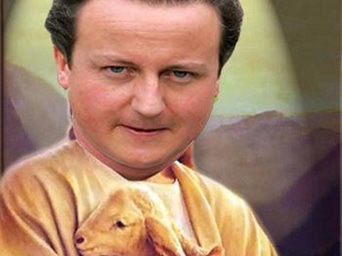 The BBC reported today that  PM David Cameron has said that the UK is a Christian country “and we should not be afraid to say so”.

In a speech in Oxford on the 400th anniversary of the King James Bible, the prime minister called for a revival of traditional Christian values to counter Britain’s “moral collapse”.

“We are a Christian country and we should not be afraid to say so, Cameron told the audience at Christ Church.

However, Cameron failed to explain the bizarre fact that 80% of his Tory MPs are actually Conservative  Friends of Israel (CFOI).  Cameron also failed to explain why  a ‘Christian country’ abolishes its precious universal jurisdiction law just to appease the Jewish lobby. Cameron also should open our eyes and explain to us why exactly a Christian country followed orders from a Jewish Lobby group and arrested Sheikh Raed Salah.

If we are a Christian country, why did we launch a criminal war based on a ‘dossier’ that was compiled in Tel Aviv? Also, is

the fact that Lord Levy was chief fundraiser for the Labour Government a mere coincidence?

If we are a Christian country, as Cameron suggests, someone better explain to us all how is it, that we have succumbed to ‘eye for an eye’ political doctrine instead of self search for  compassion and empathy in the spirit of Christ.

I can only suggest to Cameron that before preaching to us, he himself better  reflect on his own words,  he should  contemplate over this country’s traditional Christian values and counter  his own Government’s  ‘moral collapse’.

The Wandering Who-A Study of Zionist and Hasbara tactics   Amazon.com  or Amazon.co.uk