Home Military Caring for Our Homecoming Troops…What’s Next? 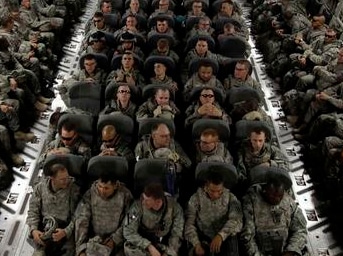 Here we go into 2012. As we kick off the New Year we are reminded once again that the nation will have thousands of warriors homeward bound as the Iraq and Afghan Wars wind down. I, like most other Veterans, pray that we do a much better job in accommodating the returning than we did for the Vietnam Veterans.

I’m not talking about just the pat on the back, and hey, “Let me buy you a drink” kind of welcome. I’m talking about the long journey most will take on the road back to becoming a civilian, re-opening the lives they left behind, finding that lost innocence that they had before being exposed to the horrors of war; and discovering the communication and intimacy that will be needed to keep their families together. What a challenge for even the strongest among them.

Were it a perfect world to which they were returning; a country with a strong economy and a bright future, I like many, would be much more optimistic. Unfortunately, with the nation facing the largest unemployment since the Great Depression, severely under estimated at 8.6 %; a government which ran roughshod with the nations credit card running up record deficits, and doubting we can meet the unfunded mandates promised to so many over decades of vote-buying promises; and the record number of Veteran’s benefits that will be needed to care for the nearly 1.5 million returnees who will be eligible, real challenges lie ahead.

With all the government agencies, including the Department of Defense, the Veterans Administration, and the social services of individual states struggling to rein-in runaway budgets, major changes are going to have to be implemented on all levels. The military is already figuring on much reduced levels of troops in all branches that will be needed to maintain the nation’s security, so hundreds of thousands will be forced out of the service and into an already restrictive job market.

There is some light on the horizon for some who might wish to continue in military service however, as one of our closest Allies, Australia, is opening the doors to enlistment of US troops for those leaving the US military. They are not at war any other than the 1000 troops still in Afghanistan. Many will wonder about taking that step, but having spent time Downunder, I can think of a lot worse places to be these days…lots of land, lots of room, lots of freedom, and an American-friendly population.

In 2009 the Australian Department of Defence released a 140-page white paper called Defending Australia in the Asia Pacific century: force 2030 (1), which announced $72 billion in new military spending for an island nation of barely 20 million inhabitants with no adversaries except those it chooses to make for itself. The document details the Australian government’s plans to acquire and expand a full spectrum – air, sea and land – arsenal of advanced weaponry in the nation’s largest arms buildup since World War II. Trying to attract military personnel already trained makes economic sense as far less will have to be spent on training.

The new weaponry Australia plans to acquire is our front-line defense arsenal that will include:

NOTE: All of the above are to be equipped with land-attack cruise missiles with a range of up to 2,500 kilometers, and most certainly of the Tomahawk ground-launched cruise missile variety, which will make Australia “the first regional defense force to have such potent weapons system.”

NOTE: The list of armament is as lengthy as it is high tech and there is mention of the Australian anti-submarine, Orion fleet being replaced with a mix of at least eight P-8 Poseidon, US Navy anti-submarine warfare and electronic intelligence, long-range surveillance aircraft, together with up to seven unmanned aerial surveillance vehicles, possibly the US-made Global Hawk.”

For years many of us have been saying it is time for the rest of the world to man-up in defense of the tyrants of the world. Seeing Australia being one of the first to make a major commitment is music to my ears. Being one of America’s closest allies it may offer an opportunity for many of our military men and women and opportunity to continue in military service, or maybe to become the trainers of those entering service in Australia.

A total of 2,226,056 service members were deployed to Iraq and Afghanistan, with nearly 942,000 being deployed more than once. With 1,443,000 now eligible for VA benefits; with over 700,000 already being treated by the VA and about 580,000 receiving counseling for PTSD and other issues, there still remain a large number of warriors who are more comfortable in uniform than out, so Australia may be an option, We as a nation have much work ahead to insure all those needing help, those with physical and mental disabilities; those needing intense rehabilitation; those needing transitioning help to grow back into civilian live so they can care for and earn a living for their families; will not have to put up with the bureaucratic maze that has hundreds of thousands who have come before them in a complete quandary.

The point to remember is that today’s military, the most over-burdened in history will need to use the services they were promised. They do not deserve the bureaucratic malaise that awaited the Vietnam Veteran. It is estimated that of the 1.44 million who are eligible for VA services, over 900,000 will actually need help, at an estimated cost of nearly one trillion dollars. With a government that can’t seem to get its act together this is a scary situation, particularly when just in the last five years the number of federal workers earning $150,000 or more a year has soared tenfold  and doubled since President Obama took office, a USA TODAY analysis finds, and yet they seek budget cuts in the VA system.