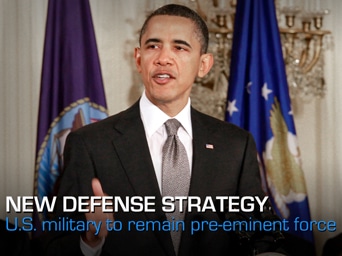 WASHINGTON, Jan. 5, 2012 – President Barack Obama today announced a defense strategy he said will allow the military to defend the United States and its national interests while cutting military spending in a responsible, balanced manner.

The president spoke about the conclusions of the defense strategy review at the Pentagon briefing room today.

The strategy review’s bottom line is that the United States armed forces will remain the pre-eminent military force in the world, the president said in a letter attached to the review.

White House and Pentagon planners will use the strategy to fund the budget Obama will submit to Congress in February. The strategy will lead to more than $450 billion in defense cuts over the next 10 years.

“As commander in chief, I am determined that we meet the challenges of this moment responsibly and that we emerge even stronger in a manner that preserves American global leadership, maintains our military superiority and keeps faith with our troops, military families and veterans,” Obama said.

The president stressed that this is a moment of transition for the military; after 10 years of war, he said, now is the time to make these changes. He pointed to successes against al-Qaida — including killing Osama bin Laden — as well as the withdrawal from Iraq and the beginning of the turnover of areas in Afghanistan to Afghan control as signs that the sacrifices American soldiers, sailors, airmen, Marines, Coast Guardsmen and civilians are having an effect.

As the conflicts end, the U.S. military will regroup and focus on broader challenges, especially as they pertain to the Asia-Pacific region, the president said. Obama had vowed to shift the focus during a trip to the region last year.

The United States also will work to maintain progress in the Middle East, Central Asia and North Africa. “We are supporting political and economic reform and deepening partnership as to ensure regional security,” he said.

The strategy is not limited to the Defense Department, Obama said. All aspects of the U.S. government must work together, he explained, including diplomacy, development, homeland security and intelligence.

The president vowed to avoid mistakes made in downsizing the military after past wars, such as the “hollow force” of the late 1970s and early 1980s that followed the Vietnam War. “We will ensure that our military is agile, flexible and ready for the full range of contingencies,” Obama said.

The United States will continue to invest in capabilities to combat the full-range of threats, the president said. He specifically mentioned investing in intelligence, surveillance and reconnaissance programs and counterterrorism capabilities, combating anti-access technologies, countering weapons of mass destruction and prevailing in all domains, including the cyber world.

“Most importantly, we will keep faith with our troops, military families and veterans who have borne the burden of a decade of war and who make our military the best in the world,” the president said. While the military must make tough fiscal choices, Obama said, funding will continue to focus on wounded warriors, mental health programs and families.