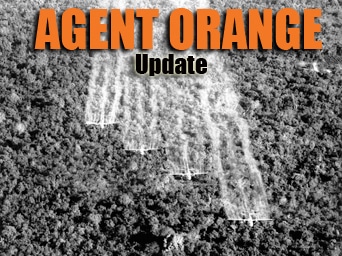 In an effort to help tip the scales for the United States during the Vietnam War, Agent Orange was developed by biotechnological companies in order to help clear dense fields, giving soldiers a clearer vision of their targets. Along with the loss of vegetation, the was an additional hope that Vietnamese farmers would relocate to U.S. occupied cities, and no longer be able to grow and provide for the Vietnamese troops.

It was known as Operation Ranch Hand and lasted from 1962 to 1971; during this time, the United States military dropped millions of gallons of this synthetic herbicide over large areas of the country—spraying some areas multiple times over. It was named Agent Orange after the colored bands that were used to mark the drums that it was stored in (others were considered Agent White, Blue, Pink, Green, and Purple).

And with the effectiveness of the chemical, came a life threatening by-product, dioxin. According to the American Cancer Society, the particular dioxin contained in Agent Orange is “one of the most toxic” man-made chemicals existing today—a weapon no doubt. High levels of dioxin rained down on the land and people of Vietnam, becoming absorbed in the soil and contaminating it completely during the war and for generations to come.

In one of the most obvious displays of chemical warfare, Agent Orange has left a debilitating mark on hundreds of thousands of people, both Vietnamese and Americans alike. In the 50 years since its first use, various types of cancer (including prostate and leukemia) birth defects, and other high-risk diseases have been cropping up from one generation to the next. And that is not the least of it.

The damage done to the land is practically irreversible and threatens all who continue to live off of and on it. “With the sole exception of nuclear weapons, never has such an inhuman fate ever before been reserved for the survivors…” explains Dr. Ton That Tung. To this day, many victims and their families have had the minimal of financial support from the parties responsible. Whenever pressed for an explanation, governmental bodies and biotechnological companies, like Monsanto Company and The Dow Chemical Company who were both behind Agent Orange’s development, have skirted around a real answer and real compensation. Sums so far received by victims and their families have been laughably minimal.

In 1978, Paul Rheutershan was, like many other service members, told not to worry about Agent Orange—that it was all “relatively nontoxic to humans and animals.” Skeptical that that was actually the case, Rheutershan created Agent Orange Victims International to act as a voice for the numerous victims in a similar situation to his, and took his case to court. He eventually passed away due to the cancer that quickly spread its way throughout his body. And with that, his case was soon laid to rest as well.

For many years after this effort, the Veterans Administration denied claims that Agent Orange was negatively affecting the health of so many people. Additionally, the U.S. Department of Defense has expressed the unlikelihood that Agent Orange would affect the health of military personnel, stating that by the time troops entered these areas that were excessively sprayed, it was no longer considered a reasonable threat.

In 2004, Vietnamese victims filed a class action lawsuit against Monsanto, Dow, and other chemical engineering companies responsible for the creation of Agent Orange. The case was practically looked at like it was a joke and a minimal settlement was reached between the victims and these multi-billion dollar corporation, barely providing the bare minimum for each sufferer—and nothing for their family.

Today, there are still numerous victims fighting for what they deserve, and the future of their family, and quietly being turned away. It is unacceptable to think that such an atrocious act can go by unacknowledged and without the proper amends for as long as this has. In no logical way, can an instance of genocide (which this is) of this magnitude be pushed under the rug, but it has. Only the minimal amount of help has been offered to the victims and nothing more. When it comes to Agent Orange and the victims it has claimed, and continues to claim, no real progress has been made for the benefit of the victims.

Until the United States government and the responsible corporations are held accountable in their role of this bioterrorism war crime, these countless victims will continue to be overlooked and unassisted.

To urge President Obama and members of Congress to acknowledge the country’s use of Agent Orange sign the petition at:

In addition to that, help hold Monsanto Company and The Dow Chemical Company financially responsible for the victims by signing this petition at: