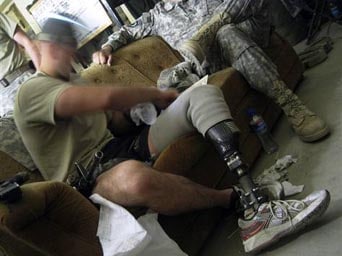 Wounded warriors who had such severe limb loss in the early days of the Iraq and Afghanistan wars were fitted with a prosthetic, rehabilitated and medically retired in most cases, amputee services officials at Walter Reed National Military Medical Center said.

That was before 2004, when the Defense Department contracted with a prosthetics company to design a “military grade” microprocessor-controlled prosthetic knee to return these skilled veterans to duty when possible, officials said.

As a result, troops who have returned to duty wearing the Genium X2 prosthetic knee during the past three years include members of the Navy’s SEALS, the Army’s Golden Knights parachute team and infantrymen on the front lines, said David Laufer, chief of orthotics and prosthetics services.

The impact of these service members returning to the combat theater is more far-reaching than the extensive skills and experience they bring with them, clinic staff members said, noting that other service members can gain a new perspective on wounded warriors when they fight side-by-side with those wearing the newly designed prosthetic knee.

“They see them bring forward what they already know and realize they can do the jobs they were doing before they were injured,” said Charles Scoville, chief of amputee services in the medical center’s orthopedics and rehabilitation department.

“They learn to respect [those wearing the prosthetic knee], and realize, ‘He’s not going to hold us back or get us killed,’” he said. “It also shows them if they are injured, they will be taken care of.”

Laufer said the new devices are on back order, because the company that manufacturers them can’t keep up with growing demand.

One, the X2, was an instant hit when the first few patients got the opportunity to try it out as a prototype three years ago, Scoville said. At the time, the next-generation knee, the X3 that is scheduled to debut this summer, was still in the design phase.

“We were so impressed by the X2 prototype,” Scoville said. “We told the company, ‘We need these now.’”

At first considered “impossible” to design, the X2 has provided a new way of life for above-the-knee amputees, Scoville said. The new microprocessor has five sensors, compared with the original C-Leg, which had two, said Zachary Harvey, a certified prosthetic orthotist.

A combination of gyroscopes, accelerators and hydraulics form the knee’s greater stability, mobility and its versatility by “recognizing” actions, Harvey said.

Multiple sensors recognize when the wearer wants to sit down or go up and down ramps and stairs, he explained, all without being preset with a remote device, as required by former technology.

Harvey said the X2 is intuitive to learn. “It feels natural to walk on, in comparison to some other knees,” he said.

The X2 also enables wearers to rapidly switch from a walk mode into a run without changing settings, he said. “The X2 knee picks up on the change, kicks in and swings out a little faster into a run,” he explained.

In addition, the X2 features a protective cover in the event of falls and other minor accidents. “It’s a qualitative and quantitative leap,” Laufer said, comparing it to the two-sensor unit on the C-Leg.

Marine Corps 1st Lt. James Byler, a 26-year-old infantryman who was wounded in Afghanistan more than a year ago, said he got used to the X2 almost immediately. A double amputee above the knees, Byler was fitted with a C-Leg for several months before receiving an X2 for one leg and a power knee on the other leg for his own comparison.

Unlike the X2, the power knee propelled him forward and was complicated because he had to focus on the knee, which was hard to do while walking, he said.

When Byler went to the X2 model on both knees, “the feeling was pretty immediate,” he said.

“I don’t think there’s any knee that compares to the X2,” Byler added. “It feels more natural than the others.”

The effect on his rehabilitation, Byler said, has been dramatic.

“It was only recently that guys like me with the really high amputations [realized] we could walk at all,” he said. “It took a lot of time and effort just to get up and walk.”

Byler said he’s decided to retire from the military, because as a double above-the-knee amputee, he doesn’t want to be a liability. But that doesn’t stop him and some of his fellow patients from putting on their X2 knees prostheses to visit newly injured patients who are bedbound. He and his friends tell the new patients it’s the X2 they want to get, and not anything else.