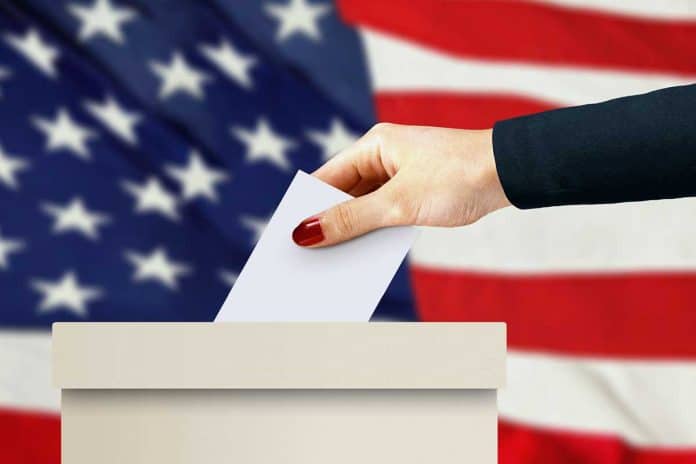 A Game of Shadows

As we enter the 2012 Presidential elections does it really matter who’s President of the U.S.A.?  Each year Americans get all excited and hopeful as they watch all the election TV shows; getting as much information as possible to elect their U.S. President. 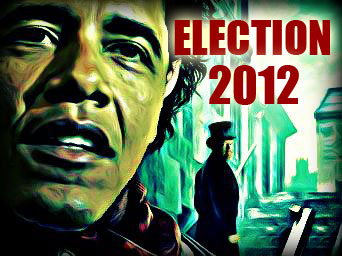 Americans love and buy into the SUPER PAC commercials created and purchased by the candidates – oops – I mean “friends” of the candidates.

And each year, after it’s all over, the winner celebrates with his voters, and the majority of the people throw a confetti and balloon party.  And then the very next day, it’s back to business as usual. The president thanks all of his citizen supporters, turns his back, and walks into the Oval Office to meet with his real owners.  And boom, nothing the voters hoped for gets done unless it is in the interests of the owners.  Welcome to 21st-century America!

Now don’t get me wrong, I love democracy and I am rooting for it.  And yes, democracy does exist in the USA.  It’s just at the simple local level where your vote does have an effect and the owners don’t have a real interest.

The Biggest Shadow Game on the Planet

Unfortunately, at the federal level, the game is so big that the people’s vote is meaningless.  It’s just there to give the impression that one has a voice.  And so the voter feels good about his leadership and the owners that stand behind the dark curtains.  And so the real business can proceed with a citizenry who’s in love with watching a reality show.  Why else do you think we get characters like Newt, Romney, Santorum, Bachmann, and Cain?  This is MTV for old folks’ home!  Thank you Citizens United!

Okay so now the spokesman for the owners, ergo the U.S. President, has his job and his trusty teleprompter giving him the eloquent words to speak for the day.  It’s a good show and Americans love it.  While it might not compete with the Kardashians it’s certainly up there with Dancing with the Stars; which is not too shabby.

De-Mock-Crazy: Owners Laughing at Us

So now what?  What do we do?  Well, some tried to revolt against Occupy Wall Street movement but that seemed to fade into the long dark police state ending with a Facebook post from a trusty government surveilled Phone and some mace to the face by a wayward New York Police Stormtrooper.

Was that the best revolt Americans can muster?

If so, the owners of the country are bathing in its mediocrity.  Millions that were needed to defeat the owners never jumped on.  They were not ready because they still have the propaganda-induced American Dream Disease (ADD).  All together now “We’re Number #1!”

So are Americans too numb or still too happy to revolt?

I mean have Americans given up on revolt and merely accepted the fact that this is a corporatocracy with a reality show called “De-Mock-Crazy“? 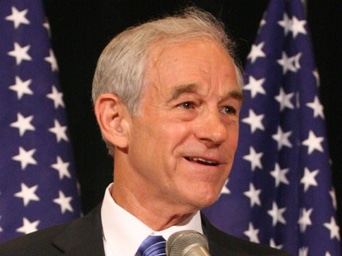 Ron Paul and Integrity Don’t Fly with the Owners

Now there is a truth-to-power force called Ron Paul.  This guy is speaking truth to power and is only beholden to the money of “we the people”.  But does he have a real chance against the predators?

I mean did you see that farce called the debate last night?  What a joke!  Brian Williams is just another tool.

He went back and forth to the Super-Pac candidates Romney and Newt and virtually ignored Paul giving him 10% of the time; a token.

Instead, they play him up to be crazy and insane when, in reality, he’s the only one NOT boldface fronting for the 1% lying like there’s no tomorrow.  Yet, he’s marginalized and branded fringe when he’s the only real person standing on his own.

I mean wow integrity is not something that’s rewarded by the owners right?  They seem to only invest in deception and farce.   Maybe next they can get Newt to marry Kim Kardashian.  That would be OPEN right Calista?   I mean it’s just the reality within this reality show.  It’s bonkers folks and the public still prefers the con to the truth.  What does that say about human nature?

For me, I love Ron Paul.  I don’t agree with everything that he sells but I am 100% sure he’s selling from the heart.  And that is something to respect.  The rest?  Con men who don’t believe in their product.

Dr. Paul is really is telling it like it is and holding us to personal responsibility and a mirror that hurts but it’s true. But he has no shot at being President, does he?  I mean they simply won’t let him in.  And if he sniffs winning, they will simply rig it or threaten him with an offer that he can’t refuse because the owners never lose.

I mean come on….do you think they will really allow Dr. Paul to get rid of the banksters?  Like that’s going to fly with these psychotic predators!  No friggin way!  We’re dealing with real top predators folks.  We are merely their food.  Get it!  They will play to kill.   We’re talking the top of immorality;  Sun Tzu Art of War guys wearing Noveau Machevellian suits made by that famed international designer Nathan Rothschild.   Do you really buy what they are selling?  Come on!

Invest In Reality TV and Cash In

So for me, I have stopped investing in “who” is U.S. President. It does NOT  matter! The owners run the show no matter what!  They are playing a completely different game and we’re not invited.

I mean come on!  Obama pledged to close Gitmo.  And I am sure he truly believed that telling us something that we know is inherently moral and right was the thing to do but when he entered that Oval Office, well…… the owners said “No, No Barry!  No Can Do” and boom, gone!  Gitmo is rockin’!

And what about going after George W. Bush and Dick Cheney for war crimes?  Where was the investigation?  The special prosecutor?  Do I need to mention 9/11?  Really?  Blah blah blah!

It’s not that Obama is a bad guy. I am sure he’s a really nice guy.  But really, he’s not in control. He can’t do what he wants.  Like Georgy Bush, he can only read the teleprompter albeit 100 times better than poor idiot Georgy and then go on vacation.  That’s the job they accepted.  It’s an acting gig!  Do the job, get paid well, and go off into the sunset, set for life.

Let me see…um?  Wal-Mart cashier or President set for life.  Hey, I can act!  Where do I apply? 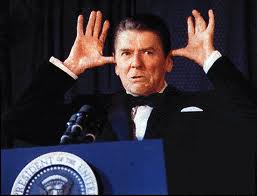 While all Presidents since John F. Kennedy have been controlled by the owners, it was Ronald Reagan who perfected the talking head role. He really showed us that a good actor can be an effective talking head.

For those too young too remember, he was called “The Great Communicator” or as we in Hollywood called him; a low-grade bad B actor and a real jerk-off union-busting leader of the Screen Actors Guild.

Anyways, since Reagan, the presidency has been on a collision course with a 21st Century reality show.

Now, I am NOT sure about George H.W Bush.  He seemed like he was one of the shadow guys who let his ego get in the way.   Think of the Teflon Don John Gotti.  The boss got in front of the camera.  Oops!  Bad idea!  You’re supposed to be quiet in the shadow you dumbass!

No matter, after that little NWO faux paux, Clinton, Bush II, and Obama were clearly not invited to the meetings where the owners discussed the game plan.  They just marched along, smiled, and played their role.  Don’t get mad folks. This is the biggest game in the world.  Are you really surprised that we are merely peasants with email addresses?

Go Back to Your Wal-Mart Job and Shut Up

So maybe we should go back to our “middle class” job at STAPLES as U.S presidential candidate Romney recently said at a reality show debate and hope the owners don’t cut us off from the relatively cheap gas, food, bread, and water!  I mean maybe we should just enjoy the show and pay the monthly fee for the right to watch.  Or maybe we should revolt?  But how?  Where?  When?  With what?  Against who?

For me?  This morning the Academy Awards just announced their nominees for 2012. So I am rooting for Newt Gingrich as the best actor in a Comedy!  Oh, I heard the Bilderbergers are up for best Director but that they are being fronted by Steven Spielberg.  Ah, who knows?  I like this NWO show!   Popcorn, please!