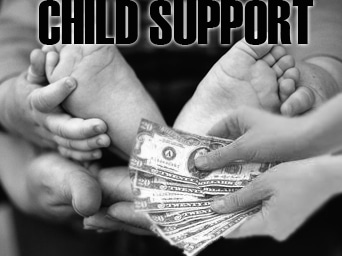 Last weekend I was standing in the checkout line at our local Wal-Mart when I overheard a conversation between the cashier and a customer. The two women obviously knew one another and began talking like they were very good friends. The Cashier asked the customer if they were going to the Jason Aldean concert that upcoming weekend. The customer replied that they had just received “their” child support check and that “they” were going to use that money to purchase the tickets, get their hair done, and pay for a sitter. This conversation got me to thinking, how much of child support payments truely directly benefit the child?

When I got home I went in search of the truth. First I called the local civil court clerk and asked if the court followed up on child support cases to verify that the moneys ordered by the judge actually were spent on the child or children? The answer I got was no, and I was referred to the local DFACS (Department of Family and Children Services) office. I then called DFACS and asked them the same question. Again the answer was no, and I was told that there was no process in place to verify such spending.

Every day in divorce courts across the country custodial parents are awarded child support. Unlike alimony, child support moneys are tax free. Alimony has to be reported when filing taxes and is taxable. However, child support does not have to be reported to anyone and is not traceable. No one can tell you with any accuracy where that money goes.

The simple truth of the matter is; if a custodial parent wishes to spend these funds on cigarettes, liquor, lottery tickets, illicit drugs, or engage in compulsive spending, no one is going to tell them they can’t do that.

Now I’m not suggesting all custodial parents misuse child support payments, but apparently there is absolutely no way of knowing if they do, or do not abuse these moneys. In my heart I would like to believe that child support payments directly benefit the child or children. But, yet again, there is no system in place to verify if it does, or not. Paying child support is a crap shoot at best.

Now I realize that I am criticizing the ‘Holy Grail’ of divorce settlements and child custody cases, and I’m certain I may take some flack over this article. But my motivation for writing this article is the children, and no one should shoot me for that. I believe every parent has an obligation to provide for their child/children. I also believe that money is not the only way to contribute in a positive way to a child’s development. Guidance and advice can be more valuable to a child than the almighty dollar. But, let’s be truthful about what child support really is. The reality is child support is nothing more than tax free alimony disguised as child support, which may, or may not benefit the child directly.

I suggest that there is a much better way to meet a divorced parent’s responsibility to their children. Instead of paying moneys directly to the custodial parent, the court could order a divorced parent to establish a trust fund or savings account in the child’s name. That money would draw interest over the years, and would be available to the child exclusively when they turn 18 years of age. The child could then use those funds for education or to start a business. There is no guarantee that the child wouldn’t use the moneys to buy pot or booze, but at least it would be “their” pot and “their” booze.

Divorce in this country has become way too easy to obtain. Individuals file for a divorce without any real reasons other than they just don’t want to live with their spouse any more. Then, they expect their ex-spouse to pay them alimony and child support after the separation. Alimony and child support only encourages the divorce and makes the process easier to pursue. I would think it would be more in the child’s best interest if their parents found ways and reasons to stay together as a family. After all, marriage is supposed to be a lifetime commitment, right?