Home Economy The State of The Union is…Well… Really Awful! 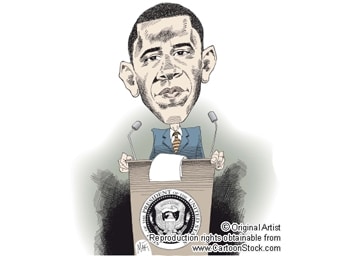 “It was awesome, powerful, the best speech yet”. Those were just a few of the accolades afforded President Obama for his first real election speech of the 2012…Sorry, I mean the state of the union speech. Those words, by the way were from the Democrats and liberal much-biased media pundits who one would expect would applaud the President when leaving the head!

My thoughts as I watched the speech took me to the movie, The Dirty Dozen, which ironically was playing on the Military Channel this past week. Lee Marvin, who by the way was a Marine, Purple Heart recipient (got a bullet in the rear end at Iwo Jima) was taking his band of ne’re-do- wells, to jump school and was asked to put his troops on display for one of the film’s antagonists, Col. Breed played by Robert Ryan. Col. Breed and the rebel Maj. Reisman had previous run-in’s and Breed was out to torpedo any “secret” mission in which Reisman might have been involved.

Upon arrival, Reisman had indicated his mission included a General, but for security reason was not allowed to disclose his name, so naturally Breed wanted Reisman to ask the General to review the base’s squared-away honor company. Reisman chose Pvt. Vernon Pinkley (play by Donald Sutherland) to impersonate the General. With the Major accompanying him, Pinkley provided a quick review of one of the squads and had one of the movie’s most memorable lines when he told Col, Breed, “Very pretty. But, can they fight?”

This brings me back to president Obama’s speech. It was smooth and articulate, to the point one would imagine the United States had very few problems, and those who might believe otherwise,  well…we we on the right course and everything was safe with Obama at the helm. He never once mentioned the $15,000,000,000,000.00 national debt ($5,000,000,000,000.00 added while he’s been behind the wheel), or that our ship had no rudder, no engine, and no one with an ounce of common sense or integrity running the country. It was the same-o, same-o.

In this world of sound-bites, bumper stickers, and photo-ops, we seem to forget that words have meaning, and our elected officials aided by a mainstream media, hasn’t done any serious investigative journalism since the days of McCarthyism, with the exception of Watergate. The once great bastions of the free press which are now rocking backward on their heels, near bankruptcy, and have forgotten what the words “unbiased” means, become the equivalent of a junior high school cheerleading outfit at the Friday morning pep rally for a team with an 0 and 10 record, in Spruce and Goose, Montana. Their pitch is irrelevant, and their shtick is to perpetuate the status quo of inefficient and corrupt governance.

There probably isn’t one in ten who can name 2-3 Supreme Court Justices, their US Senators, their local US Representatives, the Speaker of the House, or what state is due North of South Carolina. Nine out of ten on the other hand can tell you who Lady Gaga, Justin Bieber, and Charlie Sheen are, and live in a one world vocabulary with the word “like”.  I blame this on the educational system and the media who make heroes out of rap music “stars” who couldn’t carry a tune across the street; sport “superheroes”, who look and act like prison inmates, cannot speak proper English despite a college education, who glorify bad behavior on and off the field, and think nothing of using performance enhancing drugs (cheating) and constantly disappoint us when they are caught red-handed with cocaine, pot or other controlled substances. 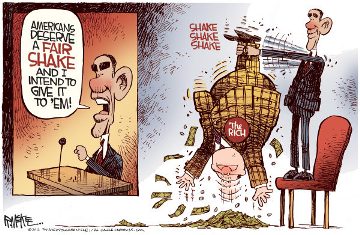 In his state of the union speech Obama breaks out his usual arsenal of class envy and warfare about the “rich paying their fair share”. What a CROCK!  The top 1% of the wage earners already pay 35% of the total federal tax revenue; the top 3% paid nearly 60% of the burden; and the top 10% of the earners paid 70% of the tax burden. I think that’s MORE THAN THEIR FAIR SHARE, when the bottom 48% of the wage earners paid no income tax. President Obama and others playing the class warfare game, when asked< “what is the FAIR SHARE” you expect the top earners to pay?”…they never give you a percentage, which to me means, the government wants it ALL! By the way, I am not in any of the top wage earner categories, but I can recognize fairness when I see it.

He goes on to say, “We can either settle for a country where a shrinking number of people do really well while a growing number of Americans barely get by, or we can restore an economy where everyone gets a fair shot, and everyone does their fair share, and everyone plays by the same set of rules. What’s at stake aren’t Democratic values or Republican values, but American values.  And we have to reclaim them”.

I agree…playing by the “same rules” is the right thing to do. It is really simple to see and it doesn’t take a Rhode Scholar to understand that what made America great is that we guarantee everyone an equal opportunity at success; we don’t guarantee all will succeed. We reward success to those who earn it by staying in school, studying hard, getting a meaningful education, and applying what you learn. If you drop out of school at 15, do drugs, run on the wrong side of the law, we the taxpayer should have no obligation to bail you sorry butt out of the hole you dug for yourself. All those office lights that are still on late into the night when people drive home from work to watch “WWF” or “Dancing with the Stars”; those parking lots full of cars in office complexes across the country while you’re at home watching “the Big game” on Saturday; those are the one’s Obama and the class warfare folks are attacking. They are paying their dues to earn the American dream.

I found it almost hysterically funny when a interview was conducted by one of the major new stations asking two of Wall Street Protestors about their issues… they were carrying signs protesting that the government should forgive their school loans. In the course of the interview it was revealed one of the protestors was majoring in Black Studies and the other was majoring in something like Horticulture, both with a dismal futures and hiring opportunities, and definitely not on the top income level charts. My question I would like to have asked these two individuals is why they expect the taxpayer to pay their way. I had to pay my own way, my sons and daughters paid their way with loans, grants and scholarships, and if they think they deserve a free ride they have certainly started life out on the wrong foot.

Getting back to Obama’s address he stated, “Let’s remember how we got here.  Long before the recession, jobs and manufacturing began leaving our shores.  Technology made businesses more efficient, but also made some jobs obsolete.  Folks at the top saw their incomes rise like never before, but most hardworking Americans struggled with costs that were growing, paychecks that weren’t, and personal debt that kept piling up… In the six months before I took office, we lost nearly 4 million jobs.  And we lost another 4 million before our policies were in full effect.”

Under the current administration some 3 million jobs have been created. But with the growth of the labor market, we need job growth created by the private sector at a pace 2-3 times faster than is happening, but those jobs won’t happen until the administration can proved the US market is stable with a tax policy that make sense and without all the new mandates and regulations coming down the pike. Additionally these numbers are misleading because they only count those fitting the Labor Department’s narrow definition of “employed” and “unemployed”. We should add to that the net gain or loss from the size of the actual labor force–the actual number of people able to work.

These numbers also assume the population hasn’t grown, but that’s not the case. The population is always growing, and the definition of the labor force is anyone over the age of 16. Proportionally, if the labor force was the same percentage in 2011 as it was when Obama took office, the total job losses are more like 11 million because Obama has actually shrunk both the number of jobs available and the number of people willing to work. But these are only numbers and as I have stated on many occasions in my writing, liars figure and figures lie. The fact that the stimulus legislation dumped about 1.2 trillion dollars into the economy, that boils down about $400,000 for each job created. Is that a good deal for the taxpayer? I’ll let you decide; our children and grandchildren will have to pay that bill.

Anyway, “class envy” will be the war cry by the administration as we ride off to the November elections. If you believe America has been made great by punishing those who work hard and rewarding those who do not take responsibility for the results of their life-style choices, then your pathway to the voting box is clearly defined.  There are however, a few little tidbits you show be award of as were pointed out to me in an email that was forwarded over the weekend.

Those in Washington DC along with many of those working for our government speak from both sides of their mouth when the issues of taxes, tax revenues, tax collection, or any and all uses of the “T-Word” come into play.

And after all is said and done he talks about how the success of our military is brought on by teamwork and the spirit of working together, which is what he’s asking all Americans to do by giving him another four years in office. My fear is that at the pace he’s on, we may be on our way to another civil war, particularly when our house of cards goes belly-up.