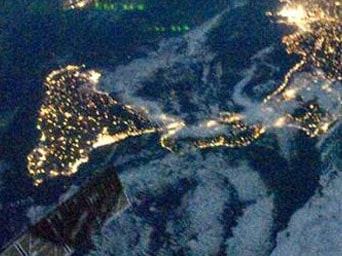 There are shades of the Occupy movement within it, but the core is not dissatisfied unemployed youth with no property or businesses to lose.

They are middle aged and older. They know that what they have left has been targeted by their own elites to bear the economic pain.

The other difference is size. Sicily’s five million people, their grass roots people, have occupied themselves.

So of course the story caught my eye and I then checked the mainstream media sites to look at what I was sure to be some great video. Wrong! So far, there is almost nothing.

I went back to check my date…and yes it started on the 16th and took two days to shut the island down, nothing going in or out. That was almost two weeks ago and I just learned today, and I can assure you I am not a hermit.

Can you image the Occupy Wall Street people having shut Manhattan down of two weeks with no European coverage? Sure, it’s Sicily and not Manhattan…but it’s big, 25,000 sq km. That is why I used the space station feature photo.

What could corporate media possibly be afraid of? Well grab your seats, and here it is:

The arrest of all corrupt politicians

Reduction in the number of Parliamentarians

Removal of the provincial bureaucracy (local crooks), as most of these politicians have been there for over forty years

Drastic cuts in the salaries and privileges of Parliamentarians and Senators

Now there are some radical ideas. They must have come from some Anarchist Aliens that landed in Sicily during the night. Or…it sounds like we all have a common problem, that requires a common solution, which requires that we might want to start working together. That sounds like another radical idea, but Veterans Today would be happy to offer a platform for such an exchange.
Here is one YouTube video that I found with only a whopping 47 views. Now that’s what I call getting the word out! I mean, really…is Sicily on everybody’s hate list or something? Did they do something REALLY bad? Maybe I am a hermit and just don’t know it. You might need to turn me in to Gordon!!

Today is the third day of protest in Sicily. The island is almost paralyzed.

In the island are protesting truckers, farmers, fishermen, craftsmen associations and merchants.

Students are organizing demonstrations in solidarity, occupying roads and harbours. In Gela they close the entrance to the refinery, threatening the port operations.

Hundreds of trucks are at Villa San Giovanni harbour trying to ship to the big island with tons of goods (fruit vegetables and dairy supplies) will soon putrefy because the trucks cannot reach the shores of Sicily island. This stop is having a price on Sicily in terms of loss in their economy.

The stocks of fuel are scarce and in many areas of the island are over, same for food, with empty shelves in supermarkets and some smaller business are already closed. People are starting to fear the food that comes from the black market. Truck inventory is escorted by the police.

The protest against increases in fuel (40% taxes on top of the basic price) and road toll, but this is just the top of the iceberg. The leaders of the movement speak of “a cry of despair and revolt of the workers on the island.”

This is not an usual mobilization that gathers social sectors and political groups that have little in common: waving separatist flags next to the Forza Nuova (extreme right wing movement).

The risk of exploitation is as always very high. Even more in a region like Sicily, perhaps the one that most supported the center-right government led by Berlusconi, who has led the country to bankrupt.

Many people believe that fascists and mafia are behind and within the movement. There are those who ask the promoters of the protest to distance themselves from people linked to the crime who are seizing the moment to join the protest as victims to have a sort of control.

Prosecutors in Palermo confirmed the possibility of such suspicious, but it is unknown whether there are already ongoing investigations.

As Veterans Today has been stating over and over, if the good folks want to take on the deeply entrenched elite mafias, they have to set aside their petty differences that historically absorb 95% of their political activism energies.

They have to save the home front or they are going to have nothing to fight over other than working for the mobsters to hunt down those who still have something to steal.

The big question asked was how had the moderate Islamists, his party, and the secular Tunisian new leaders been able to work together so well, so far, despite their ‘issues’.

Jebali answered instantly, ‘We just set all that aside…we knew we had to concentrate on the economic problems because the voters are going to hold us responsible if they are not fixed as soon as possible’….which was a very good answer.

Both sides knew that if things were still in the big mess they are now, that with the elections one year out their butts would be out on the street. They expect to be held accountable.

Maybe these new emerging democracies can teach us older ones some things we may have forgotten, or hidden away.  We need to wise up and get these economic issues dealt with or none of the others are going to matter in the end anyway. They had to get rid of the blood suckers first to even begin the job.

We have some mega blood suckers sitting on the $4.5 trillion that Ronald Reagan and Lee Wanta wanted to rebuild America.

We have 15,000 reads on our Saturday night column but the media trucks are not parked outside my house yet. I suspect they may be waiting to see if the people even care.