Home Government Will This Get Me Sent To Guantanamo? 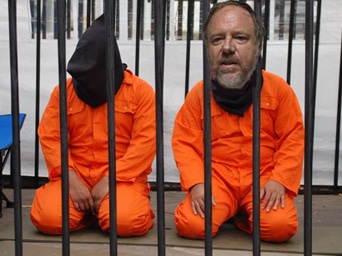 A driver was stuck in a traffic jam on the Washington DC beltway.

Suddenly, a man knocks on the window.

The driver rolls down the window and asks,

“Terrorists have kidnapped Congress, and they’re asking for a $100 million dollar ransom, otherwise, they are going to douse them all in gasoline and set them on fire.

We are going from car to car, collecting donations.”

“How much is everyone giving, on average?” the driver asks.

Normally I wouldn’t expect to get sent to Guantanamo for telling anti-Congress jokes. But these days, anything is possible. Especially if you’re Muslim. Or Irish.

Ask Saad Allami. He sent a text message to his sales team urging them to “blow away” the competition. The next thing you know he and his family were being swarmed by anti-terror cops.

…Or Leigh Van Bryan. An Irishman living in the UK, he and his friend Emily Banting got the quasi-Guantanamo treatment after posting tweets about planning to go on vacation to the USA to “destroy America” and “dig up Marilyn Monroe.” Explaining that “destroy” is British slang for “party” didn’t help. Humorlessness and imbecility are apparently requirements for working at TSA.

As an Irish Muslim, with two strikes against me already, I envy the complete impunity enjoyed by Jews like Andrew Adler, who can seriously urge the assassination of President Obama in a published op-ed and get away with it.

And Larry Silverstein, who can blow up the World Trade Center, brag about it on national TV, avoid prosecution, and collect billions from insurance companies on the premise that someone else – Muslims of course – did the dirty deed to which he himself confessed!

As an Irish Muslim, if I were to publish an op-ed calling on Hezbullah to assassinate the President, I’d be imprisoned at best, indefinitely detained at worst. Yet Adler’s still walking around free. Apparently his ethnic identity is a get-out-of-jail-free card.

That’s how it’s always been in Zionist-occupied Palestine. If an Israeli Arab kills a Jew, it’s curtains for that Arab. Yet Jews kill Arabs all the time with impunity.

In fact, IDF snipers have massacred innocent Palestinian children by at least the hundreds, almost certainly thousands, without any significant punishment.

An article in the British Medical Journal (10/16/04) concluded: “Two thirds of the 621 children (two thirds under 15 years) killed at checkpoints, in the street, on the way to school, in their homes, died from small arms fire, directed in over half of cases to the head, neck and chest—the sniper’s wound.

Clearly, soldiers are routinely authorised to shoot to kill children in situations of minimal or no threat.”

But the US, unlike Israel, has Constitutionally-enshrined freedom of religion, as well as an equal-protection clause.

Every time a US official treats a Muslim differently from the way a Jew would have been treated in similar circumstances, it is a violation of the Constitution.

Yet Andrew Adler can seriously urge the killing of the President, while Muslim salesmen get Guantanamoed for trying to “blow away the competition.”

It used to be the USA.  Now it’s Israeli-occupied territory.  Anyone else ready for an intifada?

Mercer County is proud to announce that a $29,700 grant from the JCPenney Afterschool Fund to Mercer County 4-H will partially fund local after-school programs administered by the County and the Boys and Girls Club of Trenton.

The funding will help support afterschool programs for 66 young people in Trenton, helps provide families greater access to safe and enriching programs for kids during the out-of-school hours, and allows 4-H to expand its after-school work in Trenton.

“These children are able to grow and develop in so many ways in a safe, healthy environment thanks to this great partnership between the County, Mercer County 4-H, and the Boys and Girls Club of Trenton,” said Mercer County Executive Brian M. Hughes. “They are learning more and without this grant, we would not be able to reach the maximum number of young people we possibly can.” 4-H, a positive youth development program operated by Rutgers Cooperative Extension, provides research-based, hands-on learning experiences for more than 500 youth in Trenton each year through 4-H Afterschool. 4-H programs are held Monday through Friday at collaborating after-school programs sponsored by the Boys and Girls Club, City of Trenton, EducationWorks, and Trenton After School Program (TASP) and focus on activities and skill development in areas such as environmental science, outdoor adventure, computer technology, healthy living, and leadership development. site jcpenney printable coupons

“With the support of the JCPenney Afterschool Fund, 4-H continues to provide high-quality after-school opportunities for thousands of youth nationwide,” said Donald T. Floyd, Jr., National 4-H Council president and chief executive officer. “These grants ensure that all young people have access to safe and enriching after-school programs, regardless of their circumstance.” “The JCPenney Afterschool Fund is committed to improving the positive academic and social development of America’s youth through valuable after-school experiences,” said Jodi Gibson, president of the JCPenney Afterschool Fund. We value our partnership with 4-H as we continue to build a solid, sustainable after-school program infrastructure that empowers all youth to succeed in school and later in life.” About 4-H 4-H is a community of 6 million young people across America learning leadership, citizenship and life skills. National 4-H Headquarters, which operates out of the United States Department of Agriculture (USDA), is the federal partner of 4-H programs implemented by the Cooperative Extension System of the nation’s 106 land-grant colleges and universities and in local communities through 3,150 county Cooperative Extension offices. National 4-H Council is the private sector, non-profit partner of National 4-H Headquarters. Learn more about the 4-H adventure at www.4-h.org.