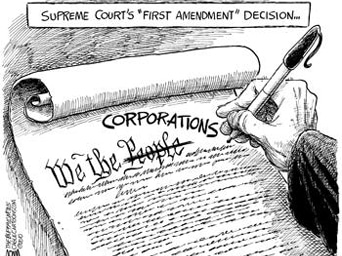 The Insanity of Corporation “Personhood” Barely Touches It 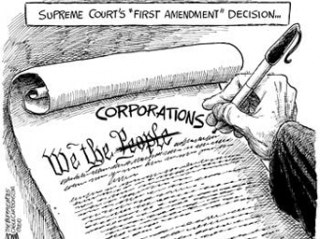 With all the blithering about a constitution few have read and fewer understand, it is time that a few things were admitted.

The constitution guaranteed slavery, no vote for women, an appointed Senate, came out with NO bill of rights and was never meant to last more than 20 years.

Jefferson’s flowery language also fails to dispel his prediction that it would take a second revolution for America to become democratic.

When that revolution came, when the South quit its enslavement to the London banking system that ran the North, it was crushed.

There was nothing in the constitution that said that a state couldn’t secede from the union, quite the opposite.  Secession is a power retained by the states, one each state still has and more should consider using.

Currently, there are no effective constitutional protections of individual rights, nothing protecting our freedoms, no trace of the original intent of the constitution left. The document is an empty shell, defended by no one, no oath kept, no right defended, no tyrant but rewarded and enriched.

In all honesty, we might as well change the name of the country itself, the current use of “the United States of America,” is a dishonor to those who have sacrificed for something that not only doesn’t exist, but that talking too openly of, teaching the real history of, may well be considered a crime. The biggest reasons are recent ones.

America has forgotten the values it sought but never fulfilled. Rights were gained by some for a while, women got the vote, African Americans have been allowed some rights when convenient while indigenous peoples, actually numbered in untold millions, were robbed and slaughtered.

America spent most of its history at the hands of urban political fiefdoms and state governments under the control of the armed thugs of the wealthy.

Individual rights, for all of America’s history have been traditionally trampled with few exceptions, names lost in our past like “Miranda.”

Central to the phony idea of a republic that never existed and a democracy never attempted has been the Supreme Court of the United States.

At any given time, big business or some foreign banking concern only had to buy or threaten five people to control the United States.

Once they did, the people meant nothing as was made obvious during the 2000 election when a runaway court appointed a loser president while with the help of armed thugs.

This was a coup d’etat by the worst legal minds, most obvious criminal group in American history.

Then came “Citizens United.” This was a Supreme Court decision that makes a corporation a person in the area of political donations.

Prior to this, only residents of congressional districts could donate money, a limited amount, and it was listed.  Corporations are invisible, you are not allowed to know who or what they are.

More than this, political donations are considered, not only “free speech” but “protected speech.”  Thus, with billions coming into the US, asking who donates is now against US law though required by UN convention.

America withdrew from the ICC, International Criminal Court when Bush faced indictment.  We have now withdrawn from the UN Convention on Money Laundering so that drug profits are now “redefined” as “protected speech.”

America has its own laws on money laundering, enforced very selectively, but congress and our government, as with other civil and criminal codes, built a “Chinese wall” around themselves.

Billions of dollars, nobody knows where or who and never has one question been asked or can ask, pays off our crooked politicians.  This is the money that bought America.

Bush was made president under the guise of “equal rights.”  What the court did was erase Florida and engineer a takeover which became the most disastrous period in world history since the killing off of the dinosaurs.

America has been ruled by organized crime every since with money, now entirely counterfeit and even imaginary, flowing into the hands of a tiny group that dances the court and their legislative cohorts around like the puppets they are.

Citizens United.  What does it mean?

To the court, it means a corporation, a single piece of paper, representing anything from an automobile company to a drug gang, can now legally buy any political office from a school board to a local sheriff to the presidency.

It overturns all campaign laws, it overrules all state and local laws and to those who understand such things, it erases all laws allowing prosecution of corrupt officials. On a worldwide scale, it legalizes money laundering.

If a drug cartel forms a corporation, all they have to do is open a bank account in the Cayman Islands, and they may send unlimited drug profits to any politician they choose and it is illegal to investigate the source of the money, the ownership of the corporation or even what the politician does because of the bribe received.

I will let you guess how many of them have done this.

All laws meant to guarantee local control of government, accountability, laws meant to exclude gangsterism and bribery were overturned, not just at local level but it placed the United States outside the United Nations Convention on Money Laundering.

Holocaust paintings can be sold and the money given to politicians.  Complaining about it or trying to seek criminal or civil remedy is blocked by federal rulings.

If the money goes to or “through” a politician or a Political Action Committee and billions of dollars do, Supreme Court rulings guaranteeing what they call “free and protected speech” prevents investigation, stops any litigation and prevents the rule of law.

“Citizens United” ended the rule of law in the United States.

It is not necessary for a corporation to have a single officer, director, employee or stockholder that is an American citizen to qualify for defacto “citizenship” under this ruling.

Any terror group, any dictator, as long as they spend $35 filing corporate documents that are not subject to any verification or regulation, can send billions to a candidate for, let’s say, sheriff on a key area on the US/Mexico border.

State governorships are bought and sold like candy bars.

This law has allowed, according to some federal law enforcement officials, for up to 30% of elected officials in the US to fall under the influence of groups tied to drug dealing and terrorism.

This year, a reputed Vegas crime boss claims he can use his billions to buy the presidency and personally order an invasion of Iran and a possible nuclear first strike on Russia and China.

Two presidential candidates belonging to the Republican party have entered into negotiations, each offered an initial payment of $100,000,000 with more to come if they agree to his terms.

Another “media mogul” wishes to wiretap congress and take over operations of the FBI to be used for his personal purposes.  The same individual had taken over Scotland Yard in Britain, blackmailed two prime ministers and harassed the families of war dead.

This person may well spend as much as his Las Vegas counterpart.  His real goal, we have discovered, is also a nuclear war with the eventual victim very likely the United States.

On February 14, 2012, Steven Rosen, former head of the Rand Corporation, former member of the National Security Council and employee of the American, Israeli Political Action Committee will present evidence that secrets, which include nuclear weapons and guided missiles, were passed through Israel to China, Russia and India.

Long range guided missiles built with American technology, each topped with up to eight warheads each  five megaton hydrogen bombs of American design, will stand aimed at the United States by two nations thought of as American allies, to be used at a “time of convenience.”

Proof these weapons have existed has been around for months.  Threats have been made against, not only the US but Western Europe. Both nations receive, not only financial assistance from the United States but military help as well but stand ready to attack America with a minimum of 150 million dead.

This is one of America’s biggest national secrets, with everyone attempting to turn over documents either killed, indicted or in hiding.  Personal, face to face, conversations with a national intelligence chief assure me that the American Secretary of State is aware and has seen proofs.

I have spoken to witnesses of document handovers, all recorded by the FBI.

You see, the “unthinkable,” a world nuclear war, especially after the Fukajima disaster and with the design of new “low residual radiation weapons” makes the nuclear war, known as the “Kissinger policy,” not only possible but inevitable.

It also makes it possible for nations like Israel or India, with space programs and large, if not huge, nuclear arsenals, to be “five minute superpowers.”

With a government controlled by organized crime, with a military divided, an Army with many willing to see America die under as extolled in the blatherings of former general Boykin or the Dominionists who stole nuclear weapons from Minot Air Force Base, is there anyone reliable left to protect America at all?

America has never been weaker,  with eleven carrier battle groups to confront China for Taiwan while America admits defeat by the Taliban and flees Central Asia.

The next enemy that defeats the United States will use spears and rocks.

[Editors Note: Gordon knows a bit about this personally, as supply problems during his year in Vietnam on constant patrol found him and his squad having to beat people to death with rocks….JD]