Home Government Obama 2012 – May The Farce Be With You 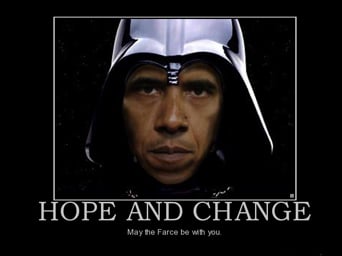 In four years, Nobel Peace Prize laureate Barack Obama, the agent  of hope and change, has become the prince of darkness and his presidency has become a farce ~ an absurdly futile exercise in pretense and broken promises from a president who cloaks himself in armor and answers only to the global elite. 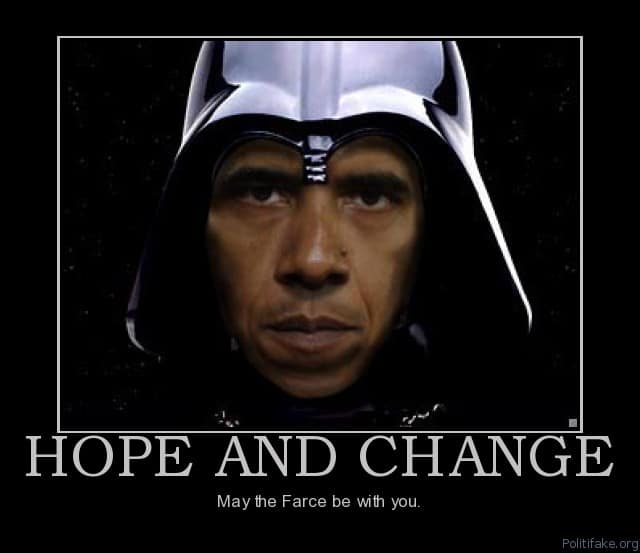 I am a former progressive Democrat, now a proud member of a vast army of Independents, who are fed up with a president who was obviously selected by the global elite, and elected to maintain the status quo ~ and most certainly does not deserve another four years to deliver on the false promises he made four years ago.

I’m tired of being lied to, I’m tired of watching our liberties rapidly erode under the tattered banner of the War on Terror and I’m tired of watching and experiencing our constitutional right of public dissent being marginalized and suppressed in order to maintain an out of control and still unregulated Wall Street ~ as well as a rapidly expanding Prison Industrial complex and a growing militarized police state.

A recent Human Rights Watch report has revealed critical issues facing Americans today including severe poverty, child labor, overcrowded prisons and a flawed judicial system. Here are my recent brief comments on Press TV regarding these points along with US government tactics of suppressing citizen rights amid on going movements aimed at exposing the unequal distribution of wealth and power in government and business. And what does the establishment really fear? The answer is an empowered people armed with the truth! 3 minute video

And here’s where it all started ~ When a carefully groomed President elect Obama renewed his allegiance to the establishment and status quo with not only the promise to not prosecute the numerous abuses of power by the Cheney/Bush administration but  to continue those very same unconstitutional abuses under the banner of hope and change you can believe in.

Want an excellent example of the continued arrogance of the Obama administration regarding preemptive regime change and American exceptionalism ~ then look no further than an obviously triumphant Secretary of State Hillary Clinton sharing a laugh with a television news reporter moments after hearing deposed Libyan leader Muammar Qaddafi had been brutally killed and laughingly exclaiming “We Came, We Saw, He Died”   12 second video

So the farce of American exceptionalism continues but the moral fabric of America, along with its constitution, has been irreparably damaged. Frank Rich calls it the haunting ~ and writes that Obama’s original sin is failing to demand a reckoning for those who brought the economy down;  “What haunts the Obama administration is what still haunts the country: the stunning lack of accountability for the greed and misdeeds that brought America to its gravest financial crisis since the Great Depression. There has been no legal, moral, or financial reckoning for the most powerful wrongdoers. Nor have there been meaningful reforms that might prevent a repeat catastrophe. Time may heal most wounds, but not these. Chronic unemployment remains a constant, painful reminder of the havoc inflicted on the bust’s innocent victims. As the ghost of Hamlet’s father might have it, America will be stalked by its foul and unresolved crimes until they “are burnt and purged away.”  See article

So President Obama has cloaked himself in armor, much as Cheney and Bush did, but Obama’s weapon of choice is Drones ~ because they can be used secretively and they avoid direct confrontation or accountability, which Obama obviously abhors.

Armed Predator Drone at one of at least 60 U.S. Military and CIA bases around the world.

Unmanned aerial vehicle (UAV’s or drones) technology is advancing rapidly and they are now looking into making them autonomous, that is to say they will be able to choose targets and kill them without the use of a human operator thousands of miles away. It is estimated that close to 50 civilians are now killed per Drone strike ~ and the United States is the biggest perpetrator as with Internationally condemned cluster bombs and land mines.

Drones are Flying robots that kill… or Lethal Autonomy as revealed in (As The Drone Flies) by Ralph Nader.     6 minute Video:

And now it appears that Obama’s terror drones are targeting rescuers and funerals in Pakistan ~ according to Chris Woods and Christina Lamb in ICH; “Although the drone attacks were started under the Bush administration in 2004, they have been stepped up enormously under Obama. There have been 260 attacks by unmanned Predators or Reapers in Pakistan by Obama’s administration ~ averaging one every four days. Because the attacks are carried out by the CIA, no information is given on the numbers killed…. Speaking publicly for the first time on the controversial CIA drone strikes, Obama claimed last week they are used strictly to target terrorists, rejecting what he called ‘this perception we’re just sending in a whole bunch of strikes willy-nilly’.

‘Drones have not caused a huge number of civilian casualties’, Obama told a questioner at an on-line forum. ‘This is a targeted, focused effort at people who are on a list of active terrorists trying to go in and harm Americans’.

But recent research has found that since Obama took office three years ago, between 282 and 535 civilians have been credibly reported as killed including more than 60 children.  A three month investigation including eye witness reports has found evidence that at least 50 civilians were killed in follow-up strikes when they had gone to help victims. More than 20 civilians have also been attacked in deliberate strikes on funerals and mourners. The tactics have been condemned by leading legal experts.”   See article

So our Nobel Peace Prize winning President has become the prince of darkness exploring the same ways and methods of the dark side as his predecessors ~ Dick Cheney and George W Bush.

And now get this ~ As were Sections 1021 and 1022 of the National Defense Authorization Act of 2012 ~ which despite Obama’s signing statement and other claims to the contrary do in fact codify the indefinite detention without charge or trial of American citizens on American soil ~ tucked neatly away in H.R.658 (and likely never read by most of our legislators) is Section 320, officially summarized as follows:

According to USA Today, “Drones, perhaps best known for their combat missions in Afghanistan, are increasingly looking to share room in U.S. skies with passenger planes…  Now, organizations from police forces searching for missing persons to academic researchers counting seals on the polar ice cap [are] eager to launch drones.”  In more specific and less candy-coated terms, once the Wide Area Aerial Surveillance System – or WAASS (think Skynet) – drone surveillance network enabled by H.R.658 is in place, privacy in real as well as virtual space will become a thing of the past as Big Brother will be able to spy on just about anyone doing just about anything just about anywhere in the United States or elsewhere.

As the Department of Homeland Security (DHS) stated: “The primary objective of WAASS is to provide persistent, long-term surveillance over urban and rural terrain at least the size of 16 km2. The surveillance system shall have an electro-optical capability for daylight missions but can have an infrared capability for day or night operations. The sensor shall integrate with an airborne platform for data gathering. The imagery data shall be displayed at a DHS operations center and have the capability for forensic analysis within 36 hours of the flight.”

The war drums beat on, for the God Of War is still being worshiped in America and is still blessed by the holy fire of false patriotism as well as the farce of the War on Terror. President Obama is the latest commander in chief to wear that shiny helmet of evil ~ and only Presidential candidate Ron Paul raises his voice in opposition.  11 minute Must Watch Video

O Lord our God, … help us to drown the thunder of the guns with the shrieks of their wounded, writhing in pain; help us to lay waste their humble homes with a hurricane of fire; help us to wring the hearts of their unoffending widows with unavailing grief; help us to turn them out roofless with little children to wander unfriended the wastes of their desolated land in rags and hunger and thirst, – Mark Twain ( The War Prayer )

A program of the Federal Emergency Management Agency, grants are awarded to fire departments to enhance their ability to protect the public and fire service personnel from fire and related hazards. Three types of grants are available: Assistance to Firefighters Grants (AFG), Staffing for Adequate Fire and Emergency Response Grants (SAFER), and Fire Prevention and Safety Grants (FPandS). The open application period will run from August 15 – September 9, 2011.

Paid, volunteer and combination fire departments and nonaffiliated EMS organizations from urban, suburban, and rural communities in the U.S. and its territories.

WHAT DOES AFG SUPPORT?

Funding priorities have been categorized as: High, medium and low. Use our priority system to increase your chances of winning an award.

Flashover simulators are not eligible for funding.

Applicants may apply for more than one vehicle. However, driver/operator training/certification is required in order to receive a vehicle award.

WHERE DO I APPLY?

If you already have a DUNS number, skip to #2.

2. Once you have a DUNS number, register here: https://www.bpn.gov/ccr/default.aspx.

For more information on grantee registration in the CCR system, download the AFG Get Ready Guide or visit their website: https://www.bpn.gov/ccr/grantees.aspx