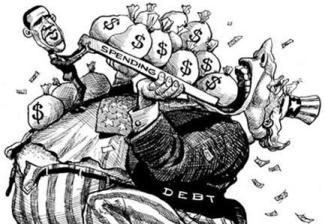 Can’t trust ’em. Can’t believe ’em. There’s not much good coming out of Washington these days, just more of the same-O, Same-O. To the military, the bureaucrats have no problem using and abusing our troops and when done…throw them under the bus.

As one looks back on it, the story really hasn’t changed that much over the years. The recruiters promise the moon but in reality the only moon the government delivered was the moon on the outhouse door; anything it takes to get the naïve kid to sign on the line. Remember “the buddy program”? How about, “you will have aviation…guaranteed”? Or maybe some can remember, “you’ll get your choice of duty stations”; “full retirement with healthcare if you decide to make it a career”. I’m sure y’all can remember more promises than that. Reality didn’t set-in until that first day of boot camp.

Most of us went ahead and completed our tour, but many did decide to take up the offer to make the military a career, after all, over the last few decades we’ve had our fair share of bozos in Washington who try to tinker so much with the economy, it has become a roller-coaster ride, so it is sometimes easier for some to just say to heck with it, stay in the service. The option for many of those who left the military was to put up with brown-nosing some idiot boss just to keep a job. Believe it or not, these were actual comments I’ve received from talking with those who chose the military career. The nation should be grateful that there were those who chose to be “lifers” because it was their experience in combat that saved a lot of Newbies rear ends.

But all those promises are falling by the side of the road as our nation’s wagon train seems destined for the edge of the cliff. The importance of the veteran has long been forgotten as will the value of a strong military as the government becomes more intent on lavishing the wealth of our country on feel good programs for those who could fend for themselves, but would rather get a handout from some irresponsible government program. Gang…when the politicians get done distributing all the money they are borrowing from China to keep the wheels rolling toward the cliff, there won’t be anything left to meet the promises they made to the veterans.

Unfortunately too, when they get done gutting the military, and I don’t mean just cutting the waste…I mean gutting the military, other rogue nations will be tempted to flex their muscles and the world will become far more dangerous. There is even talk in the Obama administration, supported by the majority of Obama’s unelected, unapproved, Czars, that nuclear disarmament should be our goal…”The U.S.-drafted resolution called for “further efforts in the sphere of nuclear disarmament” to achieve “a world without nuclear weapons” and urged all countries that have not signed the 1970 nuclear Non-Proliferation Treaty (NPT) to do so”.

Such naïve thought in the face of North Korea, Iran, China, Russia, and countless other countries, not to mention the Muslim terrorists, is pathetic. The role of our government is to protect and defend the country from all foes. This would not be possible if we didn’t pose a threat to all those with world domination their minds, that the US could turn their country into a glass parking lot and complete annihilation, if nuclear weapons were ever used against us. A strong military is the only thing that stands between our freedom and groveling on our knees to some dictatorial country.

As I have said on many occasions, we are a ship without a rudder and a seemingly have a moron of a captain at the helm. The only direction we are heading in is a financial cliff. 114,000,000,000,000.00 in unfunded government mandates for promises made to the citizens; $16,000,000,000,000.00 in national debt; and our leader has the huevos to submit a bill to the legislature for 2013 for another $1,300,000,000,000.00 to be added to the debt. In his first term that would bring the total deficit spending to over $5 Trillion, more than all the other presidents combined. This is insanity. Does anyone understand the significance of borrowing 43¢ on every dollar we spend?

After watching John Stossel’s simple explanation last night on television, I thought I’d run the numbers myself to help us all put things in prospective. The word “trillions” is so large folks just can’t comprehend that much money, so let’s use a family budget as an example:

Would this make sense as your family budget? Could you go on living this way before the roof fell in?

This is exactly the way our government is operating, and it is getting worse. The only difference in the family budget and The US Government is the amount of zeros you put into the equation (taken from 2011 Federal spending):

(Have you ever noticed that these proposed “cuts” are always somewhere down the road?)

To confuse the voter and steer them away from looking at the truth, the flim-flam artists in DC are preaching class envy and class warfare. So let’s tax every individual at 100% of what they earn…EVERYONE. Then let’s throw in all fees collected by the government plus the taxes paid by corporations (we can’t take all their revenue or they wouldn’t be anybody to provide jobs). From just the numbers for 2010, the decimal point on the federal debt won’t even move, and there would be no more jobs available from the private small businesses, because they won’t work for free. All we would be at that point is slaves working for free, which is where our children and grandchildren headed, and where our government wants us to be.

So getting back to the problems facing veterans who were promised and have earned their benefits, where does that leave them? Where does that leave the rest of the population that have true entitlements such as Social Security, Medicare, Medicaid, unemployment insurance…funds that every citizen was forced to pay into? Better cinch up your safety belt amigos. We are all in the crosshairs of the Washington Bureaucrats, and it isn’t looking good for us.

According to the government revenue records there are approximately 1607 federal give-a-ways and so-called entitlement programs amounting to 1.974 Trillion dollars! The real entitlement programs we have earned and/or paid into are playing second fiddle to all those special interest folks sitting on the butts with their hands out. The shallowness of those running for re-election, still promising to hand out more goodies to buy votes, have already secured half the American vote by either promising more or intimidating those with real entitlements with the threat that our checks and benefits will be delayed, or eliminated. Illegal aliens, because they are potential voters, have a better offering of “entitlements” or benefits than a combat veteran!

Many veterans hailed the bureaucratic gods over the proposed budget suggestions for 2013, yet even most Democrats pinch their noses when discussing it. The administration promised to pledged million of dollars for veteran job support, regardless of the fact that, in total, Obama’s pipe-dream would add an ADDITIONAL $1,300,000,000,000 in mega-debt to the nation. Neither the Senate or the House even wanted to bring the budget up for discussion. It’s downright embarrassing. Only a politician can see spending $1.3 trillion more dollars than the treasury brings in as a way to reduce the overall debt. It is laughable were it not so sad that our children will never have the American we inherited from our fiscally responsible parents.

Only a government of self-aggrandizing bureaucrats have the gall to try to defend the reckless spending, while at the same time promulgate a complete lie about the benefits veterans were promised regarding healthcare after their service, known today as Tricare. According to the Military Officers Association of America (MOAA) responding to the White House’s Feb. 13 budget proposal for FY 2013, it seems incredulous that the government can promise more resources to help veterans find jobs and by the same token take an axe to health benefits already in place.

The MOAA calls “disproportional” the increases in military healthcare fees and reductions in service levels. Vice Admiral Norb Ryan, Jr. USN-Ret., took particular exception to Pentagon proposals that impose significantly higher enrollment fees and pharmacy co-payments for military retirees and their families. The new budget plan would dramatically increase enrollment fees and deductibles for retired military families younger than age 65. Some will see nearly a fourfold increase over five years; from $520 per family to $2,048. After 2017, annual increases would be tied to a medical inflation index, which according to estimates, will increase substantially every year eventually reaching 30% of our GDP in three decades.

“MOAA sees these large fee hikes as a significant breach of faith with those who have already completed arduous careers of 20-30 or more years in uniform,” Ryan said. “The Administration and Congress already imposed a 14-percent increase last year, and Congress passed legislation stipulating that future fee hikes shouldn’t exceed the percentage increase in military retired pay. “These new increases, coming on top of last year’s changes, are a classic ‘bait and switch’ maneuver that would raise beneficiary fees by as much as $1,500 a year or more, depending on retired pay,” Ryan continued.

“For the last decade, we’ve forced military families to bear 100 percent of our national wartime sacrifice, with force levels woefully inadequate to the missions imposed on them,” Ryan said. “As a result, we’ve compelled them to deploy time after time, with too little ‘home time’ between deployments. Now, even though we’re still at war, we’re looking at very significant force cuts. We understand the desire to cut spending, and some reductions may be warranted now that we’re out of Iraq. But let’s not forget that the force size was insufficient to start with. We need to focus on meeting mission requirements and not just on achieving some arbitrary budget savings,” Ryan stated.

If indeed Obamacare is found to be Constitutional, everyone in the country, with the exception of our elected politicians (the have their own complete healthcare “Cadillac” benefit package plan), will face healthcare rationing, and a diminished quality of care, and from the looks of it, far more costly to the veteran than that which was promised. In short, stiffing the veteran in healthcare benefits after promising the moon, “ain’t no way to run a railroad”.