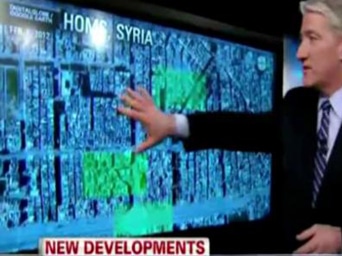 EDITOR’S NOTE: You can believe whom you will but… I go along with history.  Who benefits?

And, who has done what and employed what tactics in what appear to be similar circumstances  involving  overthrow,  destruction of governments, and regime changes, car bombings, assassinations, in so many other countries the past three or four decades?

Nothing, absolutely nothing, which the US Government has released as “public information” in the past 15 years seems to have contained very much fact or truth.

I see nothing in Ambassador Ford’s words, nor find reason anywhere else, particularly not in US Mainstream News reporting to believe that anything has changed in the US Public Information policies.

As a result, readers and viewers are uninformed.

Believe whom you will. Only a gullible fool will believe a proven liar!

What was surely meant to be a clever display of media-friendly visuals to illustrate Syrian regime violence in Homs, has instead raised more questions than answers.

US State Department satellite images of the embattled city were posted on Facebook last Friday by US Ambassador to Syria Robert Ford, who complains: “A terrible and tragic development in Syria is the use of heavy weaponry by the Assad regime against residential neighborhoods.”

The “satellite photos,” says Ford, “have captured both the carnage and those causing it — the artillery is clearly there, it is clearly bombing entire neighborhoods…We are intent on exposing the regime’s brutal tactics for the world to see.”

But within 24 hours, the blog Moon of Alabama had taken a hammer to the ambassador’s claims. A detailed examination of satellite imagery by the bloggers revealed numerous discrepancies in Washington’s allegations. Mainly, their investigations point to the fact that Ford’s satellite images were “of guns training within military barracks or well known training areas and not in active deployment.”

Moon of Alabama posts its own satellite images, graphics and diagrams to bolster its argument – and these are well worth a look.

The US envoy’s questionable claims don’t stop at satellite images, however. In his Facebook post, Ford insists: “There is no evidence that the opposition — even those opposition members who have defected from the military — has access to or has employed such heavy weapons. “ By this, he means the “artillery” used “to pound civilian apartment buildings and homes from a distance.”

Then why is there satellite photo evidence of destruction in pro-regime Alawi areas?

Fast-forward to CNN’s very own Jonathan King, who broadcast satellite images of Homs on February 9, the day before the State Department loaded their photos on the web. King’s images of Homs are dated February 5, two days after violence erupted in the city, focusing heavily in the Baba Amr neighborhood where opposition gunmen are allegedly present:

King’s presentation of “shelling, fires and damage” to Homs shows destruction of property consistent with the use of heavy weapons: “It’s like a ghost town – with no cars at all, there’s damage in the roads and so much damage on the top of the buildings.”

Zooming in on three different sections of the same Homs neighborhood to show before-and-after images of the destruction, King says: “Now obviously, we’re not there, but this powerful satellite imagery tends to support the accounts from activists that there’s a lot of shelling and fighting going on in the city, and a lot of fires.”

There is only one problem with his account. Most of the alleged fighting, shelling, destruction and killing reported widely in the international media took place in the Baba Amr neighborhood of Homs, southwest of the city, and an anti-regime stronghold.

But all three satellite images shown by King are in al-Zahra neighborhood, a pro-regime area consisting mainly of Alawis, who belong to the same Muslim minority sect as Syrian President Bashar al-Assad.

That is a stunning revelation. Pro-regime civilians in Homs and other Syrian areas have complained of attacks, kidnappings and killings by armed opposition groups for months now, with little attention received by foreign media.

And it completely undermines Ford’s contention that: “There is no evidence that the opposition…has access to or has employed such heavy weapons. “

Let’s look at some screenshots from CNN’s presentation and compare it to screenshots taken from Google Maps. The first visual is of King pointing to the three highlighted areas of destruction in Homs:

CNN’s satellite images have been turned 90 degrees clockwise in their own presentation of the photos, so in this next screenshot, we have shifted their visuals so that they are north facing – to help with comparison to our pictures in a normal north-south format. This will also make things easier for those readers compelled to rush out and conduct their own web search on the area.

Zooming into one highlighted area of destruction, you can see that the two photos – CNN’s and ours – are an exact match. To the north of the horizontal road is a lot marked by a large tree to its left. South of that same road, buildings are positioned at a distinct diagonal angle. This area is inside Homs’ al-Zahra neighborhood.

This next screenshot zooms out so that you can see the placement of CNN’s three areas of damage – all clearly within al-Zahra, which is marked by a red circle. In the bottom left hand corner of the shot is a circular area that we included as a marker to help readers distinguish al-Zahra’s location in proximity to other areas in Homs. This is where the Citadel of Homs is located.

The final screenshot is of Homs from a distance so that it is possible to view the distance between Baba Amr (circled in blue) to the left of the picture, and al-Zahra, to the right. The Citadel in the previous shot is between the two neighborhoods.

An image is no longer worth a thousand words

Photos and video footage showing scenes of violence have been streaming out of Homs since reports of heavy fighting first broke on February 3. It is hard to glean much from these because there is not enough information in the visuals to confirm the source of gunfire or shelling. The satellite images posted by the State Department on February 6 – according to the Moon of Alabama blog – do not actually show the Syrian army engaged in battle, as suggested by Ambassador Ford when he claims:

“Satellite photos have captured both the carnage and those causing it — the artillery is clearly there, it is clearly bombing entire neighborhoods.”

But his statement about armed opposition groups not having the weaponry to fight from afar is now questionable given the CNN shots of damaged buildings and “burn craters” in the road – yet even this is not conclusive.

If you don’t believe an image any longer, what do you do about this kind of allegation by Ford? One of the few videos I find credible – and that, only because in it we see the death of an actual “known” person that has not been contested – is this footage of Gilles Jacquier (warning: graphic images contained), the France 2 cameraman killed while participating in a government-sponsored tour of Homs. Jacquier was killed in the pro-regime neighborhood of Akrama, home mainly to a mix of Alawis and Christians who originally migrated from rural areas. Pro-opposition journalist Omar Idilbi had once dubbed this area “the castle of the regime.”

When allegations flew left and right about the source of the projectile that killed Jacquier and reportedly eight others that day, the Arab League monitors on the ground in Syria investigated and concluded: “mission reports from Homs indicate that the French journalist was killed by opposition mortar shells.”

Syria has destroyed for me all faith in the images I once trusted. People on both sides of this conflict are manipulating visual media to propagandize toward their political goals. The problem with this is that many genuine documented stories are now disregarded because of the skepticism of readers like myself.

Governments and media should be taken to task for their complicity in the dissemination of false information. There are lives at stake, after all – the very lives that fuel their pitiful “outrage.”

Many thanks to Adel Alsalman for the screenshots. 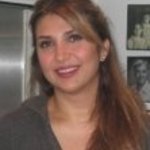 Syria is Not Tunisia or Libya