The X-37B has been circling the Earth at 17,000mph and was due to land in California in December

Editor’s note:  What we have been told is that there are more than just this, some manned, some potentially armed, and some capable of broader “range of exploration” than we have been led to see.

This is not an article to help you focus on capability but away from it.  This thing could have been built in 1955. Buy the lie.

This is the public face?  Is this video one of the private “faces,” one of how many?

The U.S Air Force’s highly secret unmanned space plane was supposed to stay in space for nine months, but it’s now been there for a year and three days – and no one knows what it’s doing.

The experimental craft has been circling Earth at 17,000 miles per hour and was due to land in California in December.

However the mission of the X-37B orbital test vehicle was extended – for unknown reasons.

The plane resembles a mini space shuttle and is the second to fly in space.

The first one landed last December at Vandenberg Air Force Base in California after more than seven months in orbit.

The 29-foot, solar-powered craft had an original mission of 270 days.

The Air Force said the second mission was to further test the technology but the ultimate purpose has largely remained a mystery.

The vehicle’s systems program director, Lieutenant-colonel Tom McIntyre, told the Los Angeles Times in December: ‘We initially planned for a nine-month mission. Keeping the X-37 in orbit will provide us with additional experimentation opportunities and allow us to extract the maximum value out of the mission.’

Editor’s note two, the phony NASA design:  Kerosene jet fuel doesn’t burn without liquid oxygen.  NO TANK.  We have liars here.  The HP tanks are overlarge, a good guess is that this is hiding a payload of laser fuel.  There is NO need for space based recon with our new Global Hawk, which flies 11,000 miles at 80,000 feet. 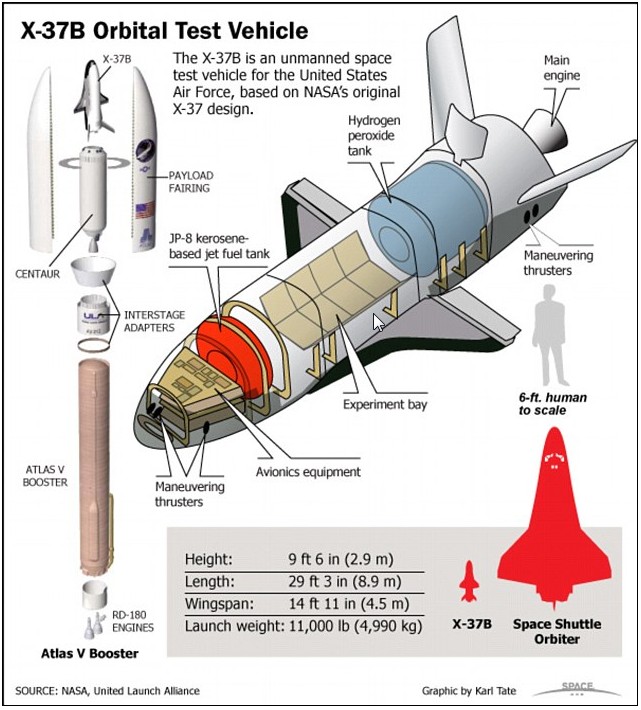 And Brian Weeden, from the Secure World Foundation, pointed out to the BBC: ‘If the U.S. really wanted to observe Tiangong, it has enough assets to do that without using X-37B.’

Last May, amateur astronomers were able to detect the orbital pattern of the first X-37B which included flyovers of North Korea, Iraq, Iran, Pakistan and Afghanistan, heightening the suspicion that the vehicle was being used for surveillance. 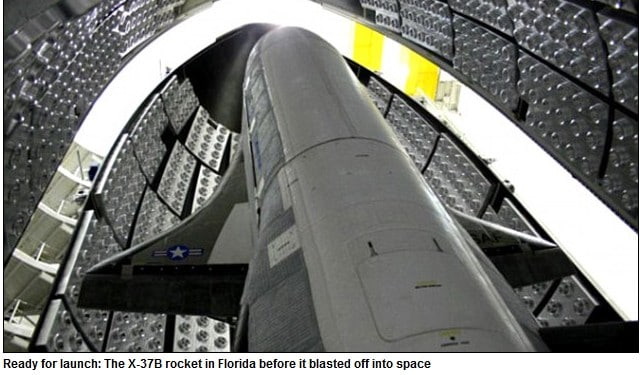 Other industry analysts have speculated that the Air Force is just making use of the X-37B’s amazing fuel efficiency and keeping it in space for as long as possible to show off its credentials and protect it from budget cuts.

After all, under budget cuts for 2013 to 2017 proposed by the Obama administration, the office that developed the X-37 will be shut down.

According to X-37B manufacturer Boeing, the space plane operates in low-earth orbit, between 110 and 500 miles above earth. By comparison, the International Space Station orbits at about 220 miles.

The current flight launched from Cape Canaveral, Florida, in March.

Editors Note: What appear apparently to be unmanned versions with no cockpits below. Multi-capabilities are being designed into most of the new modern platforms, not so much that one vehicle has multi-mission capacity but that different capacity ‘packages’ can be designed to work with the same airframe transport and controls.