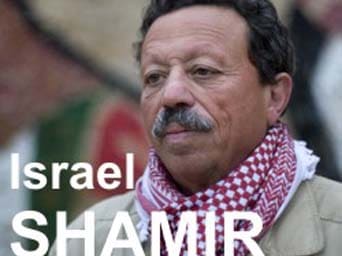 Israel Shamir, like Gilad Atzmon, is a brilliant pro-Palestinian ex-Israeli-Jew whose thoughts on Jewish identity politics and Zionism have elicited the ire of the gatekeepers.

His lack of appreciation for Gilad Atzmon’s The Wandering Who? is curious; maybe it’s because Shamir has worked the same territory himself and grown tired of it. Aside from that, his latest politically-incorrect tirade is right on the mark.

Listen to my interview with Israel Shamir: http://noliesradio.org/archives/43054

To disavow or debate Abunimah

To disavow or debate Abunimah – this is the correct question. Indeed, an American citizen, born in Jordan, who never tread on the land of Palestine, decided to ostracize Gilad Atzmon, a native Palestinian, born and bred on its soil – a silly idea! Next step, he will forbid earthquakes and hurricanes to occur.

For me, there is a terrible sense of deja-vu. Some ten years ago, the same Abunimah and his obese Lebanese boyfriend successfully hunted me out of the pro-Palestinian movement, saying that without Shamir, they will win sooner. Ten years passed, and the movement did not get to the mark it was then.

This repeat proves that Abunimah is nothing but a gatekeeper on the payroll of his Jewish Zionist friends. They pay him with the currency he appreciates: publicity and access to the Jewish-owned media. Totally unheard of previously, his articles began to be published in the important American papers. Some friendly Jews set him up with his Electronic Intifada. They keep the discourse within its permitted limits.

This is expected: the Palestinian discourse is heavily policed one; the Jews can’t allow it to run free so they would not get unexpected results. They deform it by using their anti-zionist agents like despicable Roland Rance and Greenstein, and by their Palestinian stooges like Abunimah. You can easily understand who is doing their work: they are allowed to appear in the mainstream media on regular basis, so they have to be enemies.

And despite revulsion I feel every time his name is mentioned, I’d say: something good may come even of an Abunimah. Remember Gollum who helped to destroy the Ring: even he was useful, in the last run. So one does not have to ostracise him; let us tolerate him until his own brothers will deal with this treacherous beast as he deserves.

As for Gilad Atzmon, his recent writing disappointed me, for he went heavily into navel-glazing of Jewish identity search. In my view, this is a dead-end; but a writer and a thinker should be allowed to explore dead-ends. And anyway, nobody forces us to read all these endless soul-search reports. Still, he wrote many wonderful pieces and will write many more, after he will exhaust his soul-searching.

However, as I wrote previously, his writing is fully within the framework of Jewish thought, partly in the tradition of Weininger and early Zionists, partly in the latest post-Zionist Israeli line. Our Arab brothers, perhaps, are not sufficiently aware of that; their interference is utterly out-of-place in this inter-Jewish polemics. The most important signee against Gilad, the heir to Edward Said’s cathedra in the Columbia U, Joseph Massad, whom I do respect for his brave struggle against the Gay International, failed to understand it again: years ago, he proclaimed Israel Shahak, another inter-Jewish heretic, “an anti-Semite”.

Our Arab brothers will do well if they will stand out of this debate: let the Jews fight out the battle for their identity. As it happens, Gilad is their strongest champion on the Jewish side, they should cheer, not discourage him.