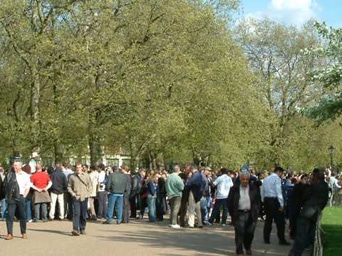 When drafting the First Amendment rights, the Founding Fathers could not have imagined that one day, America would have a Fox News, CNN, New York Times, Washington Post, Chicago Tribune, Miami Herald or ADL and AIPAC. These media outlets constitute a Fourth Branch of Government, unelected and accountable to no one. It is not the government that stifles free speech and debate – rather it is major corporate media and powerful ethnic lobbies. That is why we need a Jefferson Corner; America’s Speakers Corner in every town and on every college campus.

A Jefferson Corner would be a free speech corner – present in every town and on every campus, where citizens would hold open forums to gather, speak, listen, and engage with one another without government permission and in defiance of corporate media censorship.

The Constitution and First Amendment do not guarantee citizens the right to access open forums, nor do they provide any spaces for open forums in which citizens can speak out on radio, appear on TV, publish in Op-Ed pages, or even speak on college campuses. That is why corporate media and for the last decades shaped and limited public discourse in America. Editors and publishers have held absolute rights and have managed to stifle and censor free speech, and make decisions about what issues are of importance to the public. The media coverage that contributed and helped lead America to war on Iraq was more than enough and is worth an criminal indictment.

It has not only been powerful corporate media deciding on what is debated, but also ethnic organizations such as the ADL, Campus Watch and AIPAC have exercised a powerful role in stifling public debate and free speech, interfering with the American citizen’s right to exercise their First Amendments rights.

Thanks God for the Internet that this has all begun to change. Now someone like me has the opportunity to write, publish and speak out. However important these web-based opportunities are, the Fourth Branch of government (corporate media and ethnic organizations) continue to exercise an undue and harmful influence over public debate and public policies. As the experience of the Occupy Movement demonstrates, government continues to stifle free speech through permits during demonstrations and public assemblies. It is time for us citizens to have designated public squares, public parks and college campuses at which we can exercise our First Amendment rights.

On my first visit to London in ’79, I made sure to attend and visit Hyde Park’s Speakers’ Corner where scores of speakers mount a soap box and speak on a variety of topics. Some make sense, others make fools of themselves, but all have an absolute right to speak and audiences have a right to gather, offering cheers (and sometimes jeers) without a license or permission from governmental authority, and without approval from powerful organizations.

That experience which I make sure to repeat every time I am in London, prompted me to incorporate Jefferson Corner, Inc, as a not-for-profit organization with the idea of promoting a Jefferson Corner on every campus, in public parks, in every town and every city. The Internet while posing a challenge to the established corporate media, is no substitute for the need to engage audiences in public squares.

Designating Jefferson Corners for citizens would allow speakers to mount those soap boxes and speak up on any subject they chose, and for guests to go directly to a Jefferson Corner and speak to college audiences without having to fear Campus Watch and ADL flex their muscles and “disinvite” speakers they deem as ‘anti-Israeli,’ and ‘anti-Zionist.’

I have written thousands of times to editors at the New York Times and Washington Post (I still have copies of every letter I wrote), and out of all of these times, only one letter (to the Post) passed the censorship of editors. Perhaps my name alone was enough for the thousands of other letters I wrote to hit the wastebasket.

What America needs now is for college students and citizens around the country to petition and demand from college administrations and city councils, a permanent designation of a central location or park where students and guests can speak up on any subject they choose. No interference from college administration or the exercise of “disinviting” from ADL, Campus Watch or AIPAC.

This is one of the many ways we can energize citizens to engage in public debate and exercise their right to free speech. Jefferson Corners will provide an alternative to counter the power and authority that mainstream corporate media, the Fourth Branch of government, exercises over the affairs of nations.

We must not forget the role of the mainstream media, including Fox News, CNN, the Washington Post and the Times and the role they played in leading our country to war against Iraq, is playing the same game today, as it works to advance Israel’s position and advocate for war against Iran.

It is this Fourth Branch of government, owned by big money, driven by ideologies that do not look out for American interests, that are formulating and influencing American voters and decision makers on issues of their choosing. And what they have chosen is to cover and promote more wars, and little peace. They rarely cover important issues that are of public interest such as social services, medical and health coverage issues, employment issues, and economic policy. Instead, powerful mainstream media outlets chooses to hold our nation hostage, and shape our misfortune.

No one voted for Robert Murdoch and Fox News to determine our foreign policy, and no one voted for Wolf Blitzer and CNN or Rush Limbaugh and Clear Channel, yet these people and entites are more powerful than any US Senator, and arguably even more powerful than any President when it comes to shaping public policies and debates. They are responsible for distorting the vision and dreams of millions of Americans to lead the way in shaping a peaceful global community, and not one marred by war and devastation.

While we as citizens cannot hold the Fourth Branch of government publicly accountable, we can challenge institutionalized censorship by designating certain public squares around the nation as Jefferson Corners, making a visit and participation in this public forum a part of American cultural tradition, where exercising our First Amendment becomes citizens affairs.

Just imagine a Jefferson Corner in McPherson Square in Washington DC, or one in Central Park in NYC, and even one at Lincoln or Hyde Park in Chicago. It is time to bring free speech to the streets, to parks in every city and on every college campus.