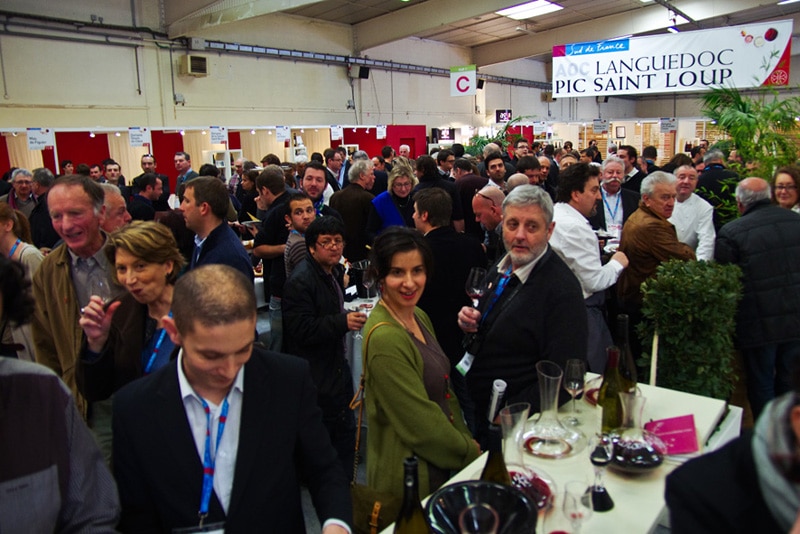 Visiting the tenth exhibition of Vinisud,  in the South of France in Montpellier from February 20-22, 2012, was an enjoyable experience. Tasting wines from various regions of France including Languedoc-Roussillon and Rhone Valley including organic wines provided me an opportunity to distinguish amongst them.

Wines from Italy were ,delicious:  Other countries such as Morocco, Spain, Tunisia had wineries present but I had to be selective so I chose only French and Italian sine: Over 1,664 producers were present and there were approximately 33,000 visitors of which 32% came from abroad and about 1,700 exhibitors.   Of the French exhibitors , 47% were from Languedoc, followed by Rhone Valley 27%; Provence 9%; South West 9%, Roussillon 7% and Corsica 2%.

VINISUD is a show for professionals who came to taste a lot of kinds of wine in three days. They were interested in discovering products that are new or not well-known as well as tasting known varietals;  Special areas provided opportunities for special tastings.

The organizers had a good press lounge equipped with meeting areas, pcs and hot and cold drinks and snacks: Catherine Bourguignon and others from the organizers, Adhesion Group, were very cordial and helpful in organizing meetings and making sure the press felt welcome.

Admission is free for those having invitations, press and VIPs. Others pay 25 Euros:

I arrived on Monday night February 22 and went to  a soirée, “ Contains Sulfites – mais pas trop” ( contains sulfates but not too many)to taste wine that I had been invited to by   Helène and David Barrault    of Chateau Tire-Pé whose chateau I visited when I went to Vinexpo in Bordeaux. There I met a champagne producer who makes champagne with 0 sugar. It tasted very good: Unfortunately I arrived too late to taste the main hors d’oeuvres and just had  delicious desserts that the restaurant made.  Fortunately I met a man who took me to  a fast food restaurant that had the best  sliced lamb sandwiches in town.

Tuesday I went to a presentation about the market for French wines in China :  China: Opportunities for Mediterranean wines  led by Michel Relondat. The room was jam packed and luckily I found a seat.  Chinese buyers are interested in Bordeaux and some wine from Languedoc. I didn’t listen very long because I wanted to taste some wine.  After visiting several booths, tasting French and Italian wine, eating delicious French cold cuts, I went to another soiréé  organized by wine producers in the Languedoc area at their headquarters. Producers displayed their wines and we tasted several of them.

A band played music non stop from the time we arrived until after dinner: What a sumptuous buffet. First we dined on raw oysters and shrimp: Then we had a choice of fish or bull meat which was very tender with rice. After that there was salad, cheese, dessert and coffee. Of course we were drinking wine with each course: Buyers ate with producers. As a buyer of wine, a producer invited me.

The producer told me that the objective of the soirée was to meet new buyers but since the buyers sat with the producers that invited them, this was not possible. The producer who drove me to the event outside of Montpellier hoped I would get a ride back  to my hotel because taxis are expensive. Luckily,  Jean-Luc from the band Backchick drove me back and I enjoyed speaking with him and Karim who also plays with the band.

Wednesday  was a very busy day. First my friend Javier Jara  from Peru, a business owner who organizes trips to Peru, who lives in Montpelier  went with me to Vinisud.  We enjoyed a delicious buffet of sliced ham, cold cuts and French specialities hosted by Pic Saint Loup  AOC by invitation only – a photo from the organizers of Vinisud with their permission.
Javier is the man wearing glasses.

Javier  was happy to speak  Spanish with Dominique de Villepin, a former French minister for foreign affairs who is  a candidate for President in France,and who had lived in Venezuela.

I met wine buyers from Finland, Italy, China and other countries.  Javier was surprised when he met  a couple, who are wine buyers, who told him how much they enjoyed going on one of  his organized tours for 21 days to Peru. His site is [email protected].  He speaks English very well having lived  in Atlanta, GA for some months.

Michelle from Atlanta Improvement Company met me at the exp and we visited some wine producers that I presented to her. I wanted her to taste some wine that the producers I know were  going to send to her wine show in Atlanta. The owner is Parks Redwine and his secretary is Sherry.

We were busy tasting Italian wine until the closing of the show. Then I went to the press roo: I missed the free shuttle bus and walked 10 minutes to a large shopping center: I looked for a bus but couldn’t find it.  Luckily a kind man drove me to the tramway so I could get back to the center of the city. Trams come every few minutes and are fast.

Buyers I interviewed at VInisud told me that it was better than in previous years because the producers were more active and offered more wine tastings: They found the meetings very informative and well presented. Also they enjoyed meeting other wine buyers.

Vinisud was a success. Buyers, producers, visitors and the organizers all agreed it was a good event.