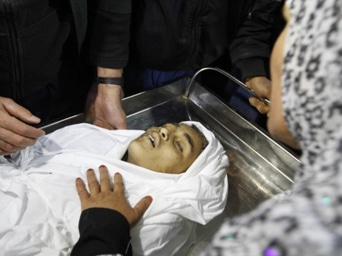 Call it revenge. Call it retribution. Describe it as “chickens coming home to roost.” Don’t call it terrorism. Call it Blowback – the unintended consequences of our foreign policy.

Among the stories that don’t get much Western press coverage, but should is one by Rosa Schiano about 12-year-old Ayoub Asalya who was killed by an Israeli missile while he was going to school.

“The nights before he was killed,” says Ayoub’s mother, “he came to me saying that he was afraid to sleep alone in his room because of the attacks. So that night Ayoub slept in his mother’s room, and he woke up early in the morning to go to school.

“Before leaving,” says his mother, “he asked me to buy a new pair of shoes, and he told me he would buy me a present for Mother’s Day.

“After a few minutes I heard an airstrike, I ran outside, and I found Wafi, Ayoub’s cousin, lying with his face on the ground. The ambulance arrived and took Wafi to the hospital.

“Then the ambulance personnel started looking for others potentially injured, and suddenly one of them started shouting that a Palestinian kid with a school uniform has been killed.

If Ayoub had been an Israeli, his story would have been covered by a whole network of Western press reports.

Lengthy discussions would have followed about how many rockets are fired from Gaza and how retaliatory strikes are necessary to preserve Israel’s security.

Strange! When these stories are about Palestinian children, there’s no talk about the need for security and retribution.

Since America is supplying much of the military hardware used to annihilate these children, Americans don’t want to hear the extent to which their tax dollars are used.

Even worse, they don’t realize that they are investing in blowback– themselves as the target.

“The shooting spree against a Jewish school in Toulouse on March 19th is the most serious anti-Semitic attack that has taken place in France since Paris’ Jo Goldenberg restaurant was bombed in 1982, with the loss of six lives,” reports Jean-Yves Camus in Haaretz. 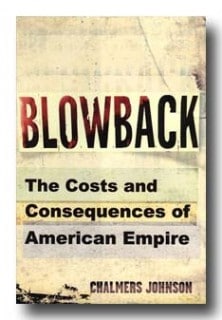 Another murder of innocents in Afghanistan was reported in the San Francisco Chronicle: “I went inside and found the dead bodies of my two sons, four daughters, my mother, brother and my wife,” Wazir said in an interview in Kandahar.

“Also my brother’s wife and his nephew, who had come from Spin Boldak and was our guest. All their bodies had been brought into one room and burned.

Chalmers Johnson author of Blowback writes, “The foreign policies of the 21st century would largely be dictated by blowback – retaliation by people on the receiving end, those victimized by our foreign policy, particularly our secret foreign policy.”

Johnson predicts that the war in Iraq alone will guarantee blowback until the end of time.

Commenting on the takeover of Iran in 1953, Ron Paul said, “Yes there was blowback. The reaction to that was the taking of our hostages, and that persists.

“If we ignore that, we ignore it at our own risk. If we think that we can do what we want around the world and not incite hatred, then we have a problem (an understatement).

“Why would anyone anticipate blowback would be less severe on the part of families in countries we have occupied for many years?” asks Congressman Paul.

The Christian Science Monitor January 26, 2011 | Wood, Janine Byline: Janine Wood Despite all the hoopla about online ads and coupons, most of America still advertises in amazingly archaic ways: a sign in a shop window, a business card on a bulletin board, a flier under the windshield wiper.

It’s not only cheap – printed fliers and a few pushpins – it’s also effective. “I’ve never paid for advertising,” says Jeanne Pinsof Nolan, owner of The Organic Gardener in Glencoe, Ill. Five years ago, she posted a flier on a grocery store bulletin board and now has some 150 clients. “My advertising is my flier,” she says.

This tranquil corner of the advertising world is huge – by one estimate 90 percent of ads are not digitized – and increasingly under scrutiny by online ad companies. One reason national ad giant Google was willing to pay a whopping $6 billion for online coupon company Groupon was the latter’s ability to bring local businesses onto the Internet.

Now, Google is reported to be testing its own local ad service, dubbed Google Offers. By bringing mom and pop stores online, Google, Groupon, and all the other group coupon sites hope to reap a bonanza. this web site groupon seattle

“The percentage of local advertising that is not digital – and that’s most of it – will change because the cost of advertising online is really low,” says Frank Mulhern, associate dean of research at Northwestern’s Medill School of Journalism in Evanston, Ill.

How quickly the online companies will succeed is another matter. Local online ad spending will grow nearly 18 percent this year, according to Borrell Associates Inc., a research and consulting firm in Williamsburg, Va. That’s a little faster than the almost 14 percent rise forecast for total online ad spending. Online coupons are growing faster – up 50 percent between 2009 and 2010 – and worth more than $10 billion, Gordon Borrell says.

Still, Internet ad salespeople will have to convince people like Peter Sykes. Laid off from a hunting store, he now rides his bike around Riverwoods, Ill., stuffing fliers into mailboxes to promote his fly fishing and hunting instruction. Would he offer a big discount on Groupon to generate more traffic? “I’m not a techie,” he says.

“The sites offer great deals to the consumers at the expense of the small businesses,” says Utpal Dholakia, a marketing professor at Rice University’s business school in Houston, and author of a recent study on Groupon. He found that 32 percent of the businesses surveyed said their Groupon promotion was unprofitable. More than 40 percent of the respondents said they would not run the promotion again.

“It’s like dynamite,” says Jay Goltz, a Chicago business owner and blogger for The New York Times. He had 900 customers respond to his Groupon ad, but is unsure how many were already customers. In addition, he questions how many people will return to his stores as repeat customers. “It’s a great invention, but it could blow up your house,” he adds. “I wouldn’t predict the end of the bulletin board.” The old world and the new world collide at Newport Coffee House here in Bannockburn, Ill. The bulletin board is so crowded that a table is positioned nearby to catch the overflow. While waiting in line for coffee, customers can check out the Pet Pal dog-walking service or pick up a schedule of language classes. web site groupon seattle

“We get about one or two businesses a day asking to post on our board,” says owner Nevair Jindoyan.

However, after perusing the bulletin board, many customers grab a coffee, sit down with friends, pull out smart phones, and scroll for deals.

“Ooh,” says a customer checking her BlackBerry, “I can get $50 off on a $100 massage from Groupon today.” Another customer scrolls down to WeDeal and reveals the day’s discount to the rest of the table.

There are many other deals available online. Foursquare, a mobile social-networking game, allows members to “check in” at local businesses and receive “specials,” which are discounts for loyal customers. A business can tap into this by offering tips at various places where would-be customers congregate. “For instance, a fitness trainer could build [his or her] following by offering tips at various gyms around the city,” says Erin Gleason, Foursquare’s spokeswoman.

LivingSocial, another daily-deal site with more than 10 million subscribers, offers ways to blend small businesses to take advantage of online advertising. “It may not be that we have the organic farmer, but we can work with the organic farmer and the local winery to create a tailored package,” says Korina Buhler, a spokeswoman for LivingSocial.

Ms. Pinsof Nolan, owner of The Organic Gardener, recently developed a website and has considered Groupon. But she continues to get most of her customers from her old standby, the flier with the tear-off phone numbers at the bottom.

“There’s nothing like seeing something right in front of your face,” says Regina Ruggiero, whose company, New York Blackboard of New Jersey, has been making bulletin boards since 1944.

And sometimes the old technology actually trumps the new one.

“I’m thinking of canceling my online dating service,” says Judy Brinkerhoff-Smith, who paints portraits of families and their pets. Her bulletin board brochure prompted 30 calls from single men, and she ended up dating one of the callers. She welcomes the calls and says, “We are all just trying to make a connection.” Wood, Janine