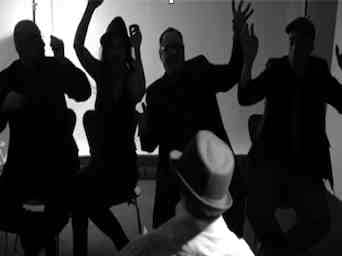 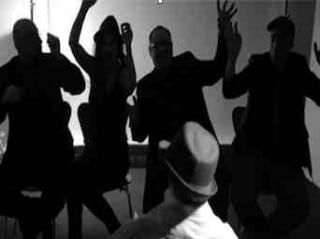 I have been working with Sarah Gillespie for the last five years. Sarah is an incredible singer songwriter, a very unique combination of poetic power coupled with natural compositional skills. Sarah doesn’t follow the book, she doesn’t fit into any recognized genre. Through collages of sounds, beat poetry and broken associations she manages to communicate yearning, pain, disillusion, joy and sometimes, hope.

I spoke to Sarah about her new project, The War On Trevor – a narrative piece of music depicting the plights of a luckless London lad whose life unravels in 1 day.

Sarah Gillespie: Obviously it is a pun on the slogan ‘The War on Terror’. A pun is a figure of language that depends on similarity of sound and disparity of meaning. It matches 2 sounds that fit perfectly together as aural shapes yet stand provocatively apart in sense. The name ‘Trevor’, like ‘Brian’ signals safe, middle of the road, normality. ‘The Life of Brian’ would not work as a concept if the protagonist was called ‘Tarquin’ or ‘Joshua’ for instance. The joke relies on the implausibility that anyone called ‘Brian’ could possibly be the Messiah. Like Brian, Trevor is totally devoid of glamour, exoticness, power or danger. Therefore, in the title alone, there is already sense that Trevor is probably a harmless, ordinary plonker. He is the innocent twin of ‘Terror.’

Gilad Atzmon: Does our imaginary Trevor posses the capacity to dwell on The War on Trevor?

Sarah Gillespie: Initially no, because he assumes it has absolutely nothing to do with him. He just wants to go to work in the morning, get paid and live a normal life. That’s exactly what he is doing in the beginning when he gets caught up in anti Capitalist riots and needs to pee. He just wants to be in the world, but the environment around him conspires to make it impossible. Three cataclysmic events happen: he is arrested, he is dumped and he is misidentified as a terrorist. This trauma induces an awakening, a metamorphosis, which is played out in the final song ‘The Banks of the Arghandab.’ (The Arghandab is the main river running through the Helmand Province in Afghanistan).

Gilad Atzmon: But here we may face a slight problem, why is a ‘middle of the road ‘Trevor’ identified as a terror suspect? Is he a Muslim, an Arab? Is it his dark skinned? In Zionised Britain people become suspicious of being enemies of the State when they fit into a very specific profile. And yet, the War On Trevor sounds to me as a Kafkaesque tale, is it possible that you express here some nostalgic yearning to the horrific bureaucratic State? At least in Kafka’s universe ethics and the absurd are lucid and transparent, something you cannot attribute to the English speaking empire. At the end of the day we kill millions in the name of liberty, democracy and freedom.

Sarah Gillespie: For sure, the War On Trevor is Kafka-eque. Yet where as Josef K was persecuted by a pre-war bureaucratic authority, Trevor is stalked by a contemporary cocktail of political correctness, so-called ‘security measures’, fear of annihilation and the Enlightenment itself. Trevor doesn’t need to be an Arab to be under suspicion. For Jean Charles de Menezes it was enough to have slightly olive skin and brown hair to get 7 bullets in the head from the Metropolitan Police. This was after days of being under surveillance. It’s impossible to conceive of a more Kafkaesque scenario than that. This means that the criteria, to become a target is vast and, with that in mind, there is a sense in which we are all ‘Arabs’.

Gilad Atzmon: Are Trevor, Brian, the so-called ‘middle of the road’ capable of thinking politically, ideologically or ethically? Or are they, together with the rest of us, totally robbed by now?

Sarah Gillespie: Like all of us, Trevor’s ability to think is disabled by the systems of knowledge he’s born into, the pedagogy, the culture, the movies etc. He can’t help it, it’s not his fault. However, while he may not be able to think ethically, he is still capable of experiencing ethics on a visceral level and no one can ever rob him of that. In the final song ‘The Banks of the Argandab’ Trevor suddenly identifies the world around him for the first time and he is swamped with grief and shock. He doesn’t present coherent slogans or action plans. Instead the contradictory images in the lyrics paint a dissociation and despair. Finally he cries out ‘we are mute and we’re sorry.’ He is robbed of his ability to articulate – but he’s not robbed of his gut, his sorrow, his heart. He simply wants to cry on the banks of the Arghandab. This is not something you would write on a badge or a placard. It is a total break down.

Gilad Atzmon: This is indeed very interesting. I also believe that 150 years of slogans has robbed us of the ability to think authentically and even operate emotionally. As if this is not enough, political correctness, which is really a set of political stands that do not allow political criticism, is there to kill and sensor any form of genuine ethical and political reflection even before it reaches a level of consciousness. I guess that in the case of Trevor it is the collapse of his symbolic order which introduces new realisations. Would you agree that politics and ideologies belong to the past. They both failed us and we come to realise it all. We are now entering the great era of civil impotence? We can’t even imagine what our means of resistance should or could be.

Sarah Gillespie: I couldn’t agree more. When I was young I was enchanted by Francis Fukuyama’s conceit that history had arrived at its destination. Modern Liberal Democracy was the utopia we had always been striving towards across the centuries. This is obviously exposed now as nothing more than a fleeting, ethnocentric, self-love festival. We are in one of those crucial moments in time where the future is unimaginable. Every ideology has failed us. The rhetoric of pseudo compassion in the Left has robbed us of true compassion. The eagerness to pretend to understand the Other has divorced us from ourselves. The slaughter of millions of Muslims in the name of Liberty has transformed us into a heartless collective. Global Capitalism has given birth to ‘tent cities’ erupting across the USA. In the light of this, all the motifs of ‘resistance’, the scarf wearing, marching, boycotting etc, though done in good faith, really provide no more than a fig leaf across our gaping impotence. It is hard even to know which topic to protest against. There are so many to choose from. All we can really hope to do is begin to think in new ways and hone our awareness. As artists, we must express ourselves freely. New ways of being in the world will invariably unfold.

Gilad Atzmon: It is more than clear to me, at least, that we cannot envisage an alternative reality or future because the reality in which we are living in is a magnitude amplification of the so-called ‘self’. The so-called ‘credit crunch’ is an amplification of our personal deficit. Neocon righteous wars are the true embodiment of our righteousness. Even when engaged in some colossal genocidal crimes we manage to convince ourselves that is all done in the name of some moral interventionist reasoning, after all we always ‘liberate’ others. Liberal Democracy has been presenting itself as the embodiment of the our ‘free will’ and, as it appears, our will is bottomless. I believe that this is why the artist is the true meaning of redemption. While the politician is stuck within the symbolic order, the artist is there to introduce a new symbolic order. Sarah, do we have a role as artists or should we just let ourselves be?

Sarah Gillespie: Both. We can only have a role as an artist of we let ourselves be. People always say about modernity ‘follow the dollar’. Perhaps the enduring adage of the future might be ‘follow the beauty.’ I’m an optimist despite everything.

Gilad Atzmon: Is the rise of Trevor just another symptom of the decline of the music industry? Isn’t he a product of an authentic independent thinking?

Sarah Gillespie: I don’t know about the mainstream music industry because I’m not a part of it. Still I doubt very much that a 16 min anti-war narrative piece of music about a bloke called Trevor is likely to be an MTV hit. I think that when music is created for the sake of itself, and not for reasons to do with commerce or identity craving, then it will convey a purity that is authentic. It might not be amazing music but it will most definitely be uncontaminated.

Gilad Atzmon: I totally agree, the collapse of our industry may as well mean that we are free at last to play and sing the song we had in mind for so long. What next?

Sarah Gillespie: new music, new poetry and a hope that we might curtail our self-loving mechanisms for the sake of a better world.