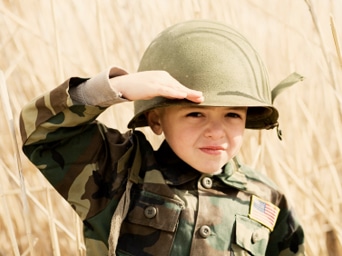 “On behalf of myself and my husband, I want to tell you all truly how proud we are of you,” Obama told hundreds of high school girls, along with some of their parents, who greeted her at Naval Air Station Jacksonville. “We are so proud of you.  We are inspired by you, and we are grateful for everything that you do for this country every single day.”

Obama made the stop as part of the first anniversary this week of the “Joining Forces” campaign she started with Jill Biden, wife of Vice President Joe Biden, last year to help civilian Americans support military families.

The first lady recognized the girls for their frequent forced relocations and dealing with deployed parents.

“It can’t be easy,” she said, “… to keep your spirits up through all those missed holidays, and missed birthdays, and times when you would give anything in the world to have them back home.”

Obama, who distributed $250 department store gift cards to the girls, acknowledged that, for many, there will be an empty seat at their high school graduation, and moms and dads who aren’t home to see them off to the prom.

Yet military kids often are leaders in their schools and communities who excel academically while taking on extra responsibilities at home, she said.

“Many of you have had to put on a brave face for maybe a younger brother or sister, even when you were worried,” Obama said. “You’ve had to reassure your parents that you were OK, even when sometimes you weren’t.

“You’ve done all of this because, ultimately, you understand that your parents are part of something far bigger than themselves,” she said. “You know that they protect and defend the freedoms that every single one of us holds dear. You know that their service keeps this country safe every single day.  And you all are a vital part of that work.

“By working so hard …, you give your parents the peace of mind they need to focus on their mission,” she said. “With your service, you make their service possible.  And for that, we can’t thank you enough.”