Home Veterans Afghanistan Is Not a US Colony! 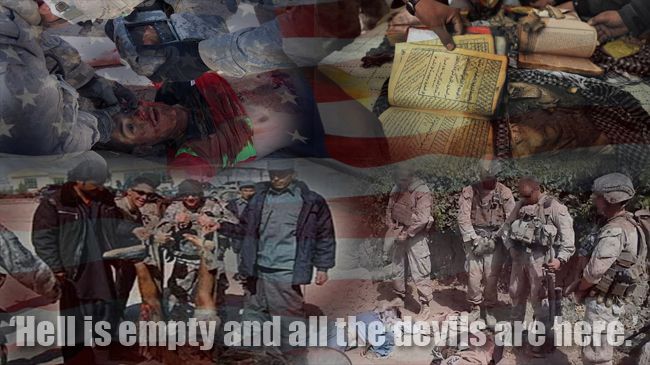 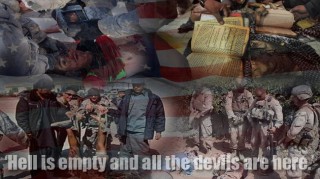 Hell is empty and all the devils are here. — William Shakespeare, The Tempest.

A country robbed of peace and bereft of aspirations, Afghanistan seems to be plunging more and more into a pitiful morass of grievances brought about by the military madness the US troops exhibit in the beleaguered land with brazen-faced contumely.

One such instance of military insanity is reflected in the two-year-old photographs recently published by the Los Angeles Times which show US soldiers posing with the mangled bodies of Afghan militants.

These repugnant photos dealt a rapid blow to US-Afghan relations at a time when Washington seeks a strategic deal with Afghan President Hamed Karzai to maintain a presence in the country after the 2014 pullout of most foreign troops.

Karzai slammed the photographs as “inhuman” on Thursday, calling for a rapid transition from NATO to Afghan security in order to stall further similar incidents. A statement issued by Karzai’s office says, “The Afghan president emphasized that the only way to prevent such bitter experiences in the future is a quick and complete security transition from foreign forces.”

The 18 photos were provided by a soldier who served in Afghanistan with the 82nd Airborne’s 4th Brigade Combat Team from Ft. Bragg, N.C. who believed that the photos “point to a breakdown in leadership and discipline.”

Apart from the rage these revolting photos sparked all across Afghanistan and the aversion they created in international community, these photos represent the absurdity and the devastating nature of a war initially waged in the name of de-talibanizing the country at the hands of those who have lost the very quintessence of humanity.

In 2010, a group of US soldiers made up a kill team and decided to go on a shooting spree in their neighborhood. Stationed in Kandahar, they went for a human hunt all for the sake of gratifying a mad passion neighing in their breasts. With no fear for any pangs of conscience that might later prick them to death, two men of Bravo Company, Cpl. Jeremy Morlock and Pfc. Andrew Holmes embarked on their devilish journey until they reached La Mohammad Kalay, an isolated farming village. They caught sight of a young Afghan whose age could not possibly exceed 15. His name was Gul Mudin. The young boy was killed in cold blood and his blood-stained body was used by the same soldiers to pose for photos. In an unnamable act, Pfc. Andrew Holmes then cut off the Afghan’s pinky for a keepsake. Later, it transpired that the US soldiers in his Platoon “[threw] candy out of a Stryker vehicle as they drove through a village [and shot] children who came running to pick up the sweets.” Later, Spiegel Online published some of these photos.

Desecrating the dead in Afghanistan by US soldiers is nothing new. In another inhuman act, a 40-second clip shows four men in combat gear urinating on three dead bodies.

They are also heard to say jokingly, ‘Have a great day, buddy’, ‘Golden like a shower’ and ‘Yeahhhh!’

It is very shocking to note that there is no limit to their insult. In February, US soldiers at Bagram Air Base in Afghanistan burned some copies of the Holy Quran.

Hatred for the US government is on the rise in Afghanistan. Any iota of optimism that Washington launched an expedition into the country in order to wipe out the Taliban and give the Afghans a breath of freedom is obsolete now. The Afghan people’s cognizance of US agenda in the country may be next to nothing but they now know the sadistic-fetishistic acts the US troops perform on dead bodies in the country are an egregious affront to the Afghans in the first place and a desecration of all qualities revered by every sensible person in the second.

Colonialism has run its course. Yet, the US troops in Afghanistan have travelled back in time when Americans colonized people through the malicious practices of serfdom, indentured servitude and debt bondage and treated them as chattels. Figuratively speaking, they built their houses on the bones of their slaves.

But Afghanistan is not a US colony!