Home Veterans Veterans For Peace Among 33 Arrested Outside Drone Base in New York... 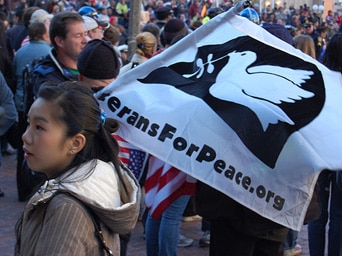 Three members of Veterans For Peace — Russell Brown, John Amidon, and Elliott Adams — were among 33 peaceful protesters arrested on Sunday outside Hancock Air Field in New York State.  Almost all of the 33 were arrested preemptively, as they walked single-file and silently along a road, prior to reaching the military base, at which they intended to approach the gate and deliver a written statement.

Here is video of the walk:

And of the arrests:

Here is a news story featuring a photo of Elliott Adams being arrested: Update: 28 military protesters arrested in DeWitt near Hancock Air Base

The Upstate Coalition to Ground the Drones reported that the Onondaga County Sheriff’s Department made the arrests in Mattydale, NY, two blocks from the entrance to the base.  “Those arrested included an 87 year old woman in a wheelchair, parents (accompanying their children), a member of the press, and the group’s attorney Ron Van Norstrand. Cameras, camcorders and phones were confiscated by the Sheriff’s Department.” blog.upstatedroneaction.org

Elliott Adams is Past President of Veterans For Peace, and current Nonviolent Training Coordinator.  He had also been arrested in 2011 as one of the Hancock 38 protesting at the same base.  Adams commented after this weekend’s arrest:

“Once again local law enforcement obstructed me from complying with the Nuremberg principles. As a veteran of several war zones I understand the importance of international law like the Geneva conventions and the remarkable UN Charter. But as I tried to serve an indictment to those committing war crimes I was arrested preemptively.

“As veterans we know how important international laws like the Geneva conventions are. We know that weaponized drones are continuously being used to commit war crimes and even crimes against peace.  The Nuremberg Principles obligate us, as citizens, to stop our government from committing these crimes.  Our arrest on Sunday was a clear case of trampling on our 1st Amendment right to ‘petition our government for a redress of grievances.’

“It is outrageous,” Adams remarked, “that on the other side of this fence people are being murdered, albeit at long distance, and the Sheriff will not even investigate. On this side of the fence we are arrested for a ‘violation of permit requirement.'”

Three women succeeded on Sunday in reading aloud at the base gate an indictment addressed to “the Service Members of Hancock Air Base.”  The Indictment states, in part:

“By giving material support to the drone program, you as individuals are violating the Constitution, dishonoring your oath, and committing war crimes.  We charge the chain of command, from President Barack Obama, to Secretary of Defense Leon Panetta, to Commander Colonel Greg Semmel, to every drone crew, to every service member supporting or defending these illegal actions, with the following crimes: extrajudicial killings, violation of due process, wars of aggression, violation of national sovereignty, and the killing of innocent civilians.” Indictment Drone- Warriors

Adams’ statement, made in court at the trial of the Hancock 38 last November is available online: Elliott Adams Member Hancock 38 and New Hancock 34- made statement trial November 1 2011

As is his statement at the sentencing hearing: Elliott Adams Entencing Statement November-11-2011

Adams told the judge: “I am proud to accept the consequences of my acts and any jail time.  I do not want any suspended sentence. If you give me one, also please let me know how I can violate it before I leave the courtroom.”  The judge, however, gave Adams a suspended sentence and probation conditions.  Adams has not ceased protesting drone wars.

Veterans For Peace was founded in 1985 and has approximately 5,000 members in 150 chapters located in every U.S. state and several countries.  It is a 501(c)3 non-profit educational organization recognized as a Non-Governmental Organization (NGO) by the United Nations, and is the only national veterans’ organization calling for the abolishment of war.