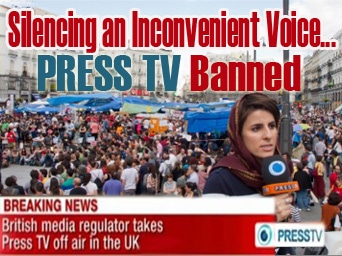 Germany follows US and UK attacks on Iranian TV and has their international English news blocked.

It was through a simple email sent to the Islamic Republic of Iran Broadcasting (IRIB) officials that the Media Regulatory Office (MHA) based in Munich notified of the decision to remove the Iranian English-speaking channel Press TV from German airwaves.

The authority has claimed that Iran’s English-speaking channel does not have a license for broadcast in Europe.

This shutdown comes after Press TV was banned in Great Britain in January 2012 by Ofcom, the government-approved media regulatory authority. [1]

On its part, the channel believes the decision is part of a strategy by Westerners to silence an inconvenient voice.

Press TV drew the attention of the UK public in particular for its coverage of the Occupy protest movement in the United States and Britain, as well as for offering viewers a different perspective on the offensive launched against Libya or Syria.

Voltaire Network recalls that freedom of expression is a prerequisite for any democracy. It can only be restricted by law. Now, in this case, censorship does not stem from a court ruling following the commission of crimes or offenses, but from a simple administrative decision of an obvious political nature.

The Lebanese news channel Al-Manar was taken off the air in a similar manner, first in France, then in all Western states [2] At the time, Al-Manar had been accused of broadcasting an anti-Semitic program, but the examining magistrate never succeeded in establishing the charge and the case was not pursued. Ultimately, it was the Conseil d’Etat (i.e. the administrative court, not criminal court) which banned the channel alleging reasons of public order disturbances in connection with the controversy sparked by the accusation of antisemitism, in spite of the fact that it could never be substantiated.

Successive administrative bans in Europe, over the last six years, of Lebanese, Palestinian, Libyan, Syrian and Iranian news channels illustrate the inability of the European Union to address the issue other than to resort to censorship and propaganda and by forsaking the most basic principles of democracy.

Such administrative bans slammed on Middle East television channels clearly aim to prevent EU citizens from gaining a different perspective on the conflicts in this region, even though wars are being contemplated in which Europeans would be brought in. In this sense, such measures are in breach of resolutions 381 [3] and 819 [4] of the United Nations General Assembly, which make it mandatory for Member States to “remove barriers that prevent peoples the free exchange of information and of ideas essential to understanding and international peace. ”

PRESS TV  lays out the facts behind their ban…

After years of struggle to impede the operations of Iran’s English news channel, Britain did all it could to make Press TV to disappear from the country’s television screens for questionable reasons.

Since its launch in 2007, Press TV has been a thorn in the side of Britain’s right-wing and pro-Israeli groups who worked rigorously to limit its operations inside Britain as the mission of the channel was “to give a second eye to Western audiences,” as described by Press TV CEO, Mohammad Sarafraz.

In 2010, the whistleblower website WikiLeaks revealed that the US and British governments were engaged in “exploring ways to limit the operations of the IRIB’s Press TV service, which operates a large bureau (over 80 staff) in London.”

Nevertheless, they needed a well-thought-out conspiracy as the revealed cable disclosed “UK law sets a very high standard for denying licenses to broadcasters. Licenses can only be denied in cases where national security is threatened, or if granting a license would be contrary to Britain’s obligations under international law.”

The well-thought-out conspiracy started with several attacks on Press TV from British banks. The most blatant instance came in 2011 when the 84% state-owned National Westminster Bank, commonly known as NatWest, froze Press TV’s account, leaving a devastating impact on the operations of Press TV Ltd., Press TV’s production company in London.

In February 2011, the whistleblower website WikiLeaks revealed that NatWest had refused to respond to their requests asking for the reasons behind their decision.

The official reason behind the decision made by Ed Richard, who is currently the Controller of Corporate Strategy at the BBC and the head of Britain’s Office of Communications (Ofcom), was that Press TV’s editorial team was based in Tehran.

This comes as several other channels, including CNN and Al Jazeera, have their editorial teams in countries other than Britain, in other words, the US and Qatar.

Despite Britain’s all-out efforts to prevent British people from being able to hear the voice of the voiceless, Iran’s alternative news outlet still provides British people with its wide coverage of issues absent in the British media.

Under pressure from the German government, Munich media regulatory office (BLM) has made an illegal decision to remove Iran’s international English Channel, Press TV, from SES Astra at 19:00 local time on Tuesday.

Press TV – In an email sent to the Islamic Republic of Iran Broadcasting (IRIB) officials, Vice President of the SES Platforms Services, Stephane Goebel, noted that the BLM has asked Press TV be immediately removed from the platform.

The authority has claimed that Iran’s English-speaking channel does not have a license for broadcast in Europe.

“BLM has…sent us an official request to immediately seize the service of the above-mentioned channel [Press TV],” Goebel noted.

Regretting the decision, Goebel added that his company “will be no longer able to keep the Press TV signal on air and will need to shut down the service without further notice.”

The move is clearly part of a plot orchestrated by the West to silence the voice of the Iranian English-language channel.