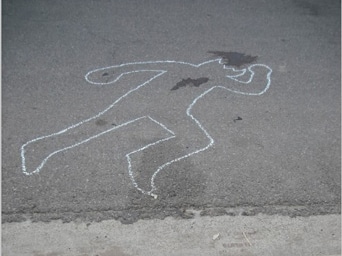 Police Withhold Witness Statements That May Find Officers Among Killers

While news around the world was told that sheriff candidate J.T. Ready, leader of the controversial US Border Guard, had killed his family and himself, they had always been holding an eyewitness, the 17 year old daughter of Ready’s girl friend, who, from moment one, had given them descriptions of those who killed Ready and the rest of her family.

Yet, the Gilbert police, the Pinal County Sheriff, both suspected of being on “cartel” payrolls, nor even the FBI, conflicted by jurisdictional disputes, has yet to release the truth, begin an investigation or start looking for suspects.

Here is some of the local coverage, this from a “Steven Lemons,” who got the story wrong and whose publication is withholding a retraction:

In fact, “government” could do no more to kill Ready and his family unless they had done it themselves.   The frightening thing is that that local police are number 2 on the list of official suspects and refuse to allow the witness, now with US Marshals for protection, to tell her story or to begin an investigation on a mass murder nearing a week old.

I met J.T. in June 2005 while I was Republican candidate for governor of Arizona.  I was a speaker at a rally in front of the Mexican consulate, a rally opposing illegal immigration, one of my core beliefs.  J.T. introduced himself and said he backed me but also looked on Israeli influence in the US as a danger to sovereignty also.  I knew his history, flirting with White Supremicist organizations but his rhetoric on “Jews” was mild, particularly so in comparison to the private discussions I had overheard with Arizona party officials who, when not near a microphone, shared some of J.T.’s views but used a softer rhetoric.  Was J.T. an “anti-semite?”  I think he fits among groups that have been charged as such, but that charge has been leveled at anyone who has opposed AIPAC or a “one state solution” to assure Middle East peace.  Were his views far from the average Arizona conservative, the average Republican voter?

On that I have to say his language was immoderate but typical discussions were Middle East issues, influence in Washington and only on occasion bordered on racist blithering, something I admit is too common place and tends to discredit the more honest economic and security issues that need addressing.

This is the power that drug money has over Arizona and the interjurisdictional issues that exist inside the state, with local and county governments working directly for cartels.

Ready had told associates that he had “honed his white supremacists ‘street creds” at the request of federal “handlers,” part of a joint task force investigating international terrorism ties between biker gangs, cartels and police, a task force run by the DEA and FBI.  Six weeks before his murder, Ready said he thought he had been “made” as an informant.

Within 24 hours of his death, the FBI announced Ready “may” have been involved in a 5 year series of murders of unnamed illegal immigrants but that their investigation had been stopped as “Ready had been found to have only been using ‘protected speech,” as quoted by FBI Special Agent in Charge, Turgel, of the Phoenix office.  Thus, there is no federal responsibility for the killing of an informant who entered one of the most dangerous environments in history, instead only half hearted “blame the victim” rhetoric, right out of the FBI Academy “blame anyone else, cover your own ass” class, which, in fact, makes up the entire education of almost every federal authority.

How do you think they shot Gabby Giffords on a Saturday morning at a public event in a large city, murdered a Federal Judge whose two-man security detail had been “withdrawn?”

Not one officer was within 10 miles of the center of Tucson and even paramedics didn’t begin to make the leisurely drive until over 45 minutes after being informed of another mass murder.

When police arrived, the seized all cell phone footage, contaminated the crime scene, arrested a mentally incompetent shooter who was in a 3 year Army sponsored program to treat psychiatric disorders that prevented his enlistment, and then had the parking lot hosed of blood.

We checked, there is no such Army program, police were less than 500 yards away but refused to respond, this is Arizona, the state that the cartels now number among their own.

The Ready killings elicited a response of over an hour. automatic weapons fire in the middle of a better neighborhood, dozens of calls made.  It was the Gabby Gifford’s shooting all over again with a bit of Ruby Ridge mixed in..

Ready had clearly made mistakes.  When he found himself forced to run for sheriff, to stand against law enforcement that he and his organization had found, county after country, under the control of Mexican cartels and a combination of police and motorcycle gangs that distributed a dozen or more drugs, gaining full control of over half of Arizona, and coming close in 5 similar states, he turned to the federal government.

He became an informant, informing on police, on the cartel reps, on US government complicity in drug running, immigrations officers who helped the cartels and more.  This was his suicide, trust.

On Wednesday one of Arizona’s greatest hero’s was murdered in cold blood by parties unknown. In addition to his death the media assassinated the man’s reputation and attacked his character. By doing so they escalated the magnitude of this heinous crime to a much higher level. The cartels and other drug traffickers do not simply kill you and your family: they humiliate you and destroy your reputation.

Only one small problem, the Gilbert Police spokesman made the statement knowing it was false, and incomplete. The Gilbert Police Department had witness 17 year old  Brittany Modero in protective custody. The Gilbert PD also had statements from neighbors who saw 2 other cars at the house, which fled the scene before the police arrived at the shooting.

This is more than simple obstruction of justice, the Gilbert PD and every corporate owned and controlled News outlet in Arizona especially the local outlet for Village Voice Media, the “New Times” reporter Stephen Lemons. Since it has now been disclosed that there were other people in the house at the time of the shooting, why didn’t Gilbert PD or Media outlet issue an apology or a retraction. Nothing but silence from corporate media, I guess the truth does not fit their pre-planned agenda to destroy the character of Mr. Ready and cast him as a crazed white supremacist, Neo-Nazi.

The Gilbert PD may have committed a felony crime; every corporate media source that rushed to judgment in the race to destroy Mr. Ready’s reputation and attack the White Supremacist, Neo-Nazi may have committed a felony as well. The crime of Criminal liable is a felony, you see committing suicide is a crime in Arizona. Mr. Ready did not commit suicide; he was killed in cold blood. The media frenzy powered by irresponsible media hack reporters like Stephen Lemons, who fail at the basic responsibilities of journalism, are now exposed to the very real possibility of being charged with the felony crime of criminal liable, A criminal complaint  will be filed with the State Attorney General’s office to bring Justice for J.T.

Mr. Ready has a surviving mother and brother who have lost a son. They will no difficulty in finding competent legal counsel who is eager to take the civil case on contingency, Justice for J.T. Will be costly for the Corporate Main Stream Media, but justice will be served. Criminal Liable must be taken seriously. J.T. deserves justice and so do the other victims.