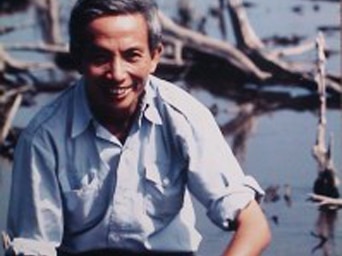 The war has ended for 38 years . Although Vietnam has attained miraculous changes in many fields, the country remains blighted by toxin which are not only harmful to environment but also affect seriously health, causing many potential dangerous diseases which heredity factors. These diseases have made people sickened , suffer interminable pains and deep psychological wounds together with prolonged and profound social consequences.

Most of the defoliation campaign (86%) focused on the destruction of mainland forests and coastal mangrove forests of the South part Vietnam. The two mangrove forest areas most affected were Sac Forest (Can Gio – Saigon) and Ca Mau cape.

Mangrove forests act also as a “solid green wall” to protect coastlines and sea dykes, and to control erosion and damage, caused

by floods and typhoons. Their dense system of roots absorb and trap sediments, contributing to the expansion of the mainland toward the sea, increasing the level of the land; and also serve as barriers to protect marine organisms living in coastal waters by preventing them from pollutants including heavy metals carried by rivers running to the sea.

Before 1943, there were about 250,000 ha of mangrove forest, mostly in the coastal areas of the Mekong River Delta. About 159,000 ha of mangroves in this area were seriously devastated by toxic chemicals of the U.S. military forces during the time of war. The tremendous consequences of the destruction of mangrove forests have encountered difficulties in rehabilitation; biodiversity in these areas has been reduced; and all continue to affect on the lives and health of communities in the region.

The Can Gio forest area of 40,000 ha is situated in Can Gio District of Ho Chi Minh City. Between 1962-1970 most of the mangrove forests of the area was completely destroyed by napalm bombs and toxic chemicals sprayed by the US military forces. By 1978, the area contained 4,500 ha of the species Phonix paludosa, 10,000 ha of bare land and dried mud, and 5,588 ha of forestry land. The remaining area was covered with dispersed vegetation of poor shrubs while valued woody tree such as Rhizophora sp. and Bruguiera sp. had disappeared.

Ho Chi Minh City established the Duyen Hai Forestry Enterprise in 1978 with the goal of rehabilitating the mangrove forests. In addition, the city established state-owned farms on degraded forestry land to grow both staple and industrial crops, and planted forest trees, to relieve the dense population and unemployment pressures in inner urban areas and protect newly planted forests. But lack of understanding and experience in the management and conversion of saline soil into alum soil caused the planting to agricultural and industrial crops to eventually fail. At the end of 1989, a large number of the state-owned enterprises gave the land back to the city. As a result, some unowned plantations were cleared by illegally logging for timber and fuel wood. To address this challenge, the city decided to allot forest areas to local poor households, and at the same time, established a Protection Forest and Environmental Management Board to replace the forest enterprises in the role of protecting and planting forests in the area. Those households who settled in the forest were provided with financial subsidies for constructing housing and purchasing water storage vessels and production tools, and boats. They were given the mandate to protect, manage and use the forest land allocated to them according to a set of rules established by the Board. One hundred and sixty seven poor households, some of which one destroyed forest, received 14,198 ha for protection and afforestation on a contract basis, including 8,502 ha of plantations, 2,881 ha of naturally regenerated forests and 2,814 ha of land designated for other purposes. They were entitled to payments for protection of products and a proportion of products of tree trimming. Those households who wanted to earn money by fishing were provided with the facility to fish and maximize water surface areas for agriculture. Together all these actions have created well protected and developed mangrove forests in Can Gio.

Since the mangrove forests of Con Gio were designated as a Biosphere Reserve by UNESCO/MAB in January 2000, the lives of the forest guards have received much more attention. There are many more local people that have increased their understanding of the values of the Can Gio mangrove forests, which can be attributed to the information from national scientists. The desire for electricity supply by the local forest guards has been satisfied with support from the city, domestic and foreign social and non-governmental organizations through investments in the development of a solar power network providing the electricity for 155 households engaged in forest protection in 14 sub-areas. Twenty-nine water tanks (10 m3) were provided for freshwater storage. The city has provided the people of Can Gio District with access to preferential and commercial loans to assist them in stabilizing their production, and a floating medical service to care for the health of local guards. When the lives of the people were improved, the adverse impacts on mangrove forests sharply declined.

Today, the Can Gio Biosphere Reserve houses the largest mangrove forests in Vietnam, which has been rehabilitated to increase beautiful landscape housing a diverse and abundant composition of fauna and flora. Locally aquatic resources increased 10 to 20 fold compared to their previous levels.

Today, Can Gio is well known, not only for its protection forests that function to regulate the climate, control rivering and coastal erosion, and nurture species of wildlife, but also as an attractive eco-tourism destination and as a research and educational center for national and international silviculturists. The active management practice of Can Gio is a good example to promote awareness of nature conservation and environmental protection.