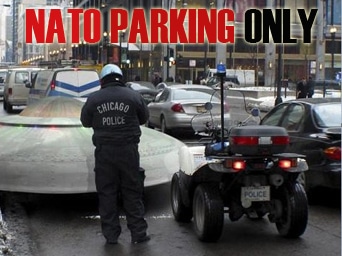 The Aliens in the Windy City

Russian Aurora has discharged a preemptive salvo against the Atlantic freedom vultures in America, which have camped out at sweet home Chicago.

No, it wasn’t another Bolshevik mutiny at the legendary cruiser in St Petersburg; it was an audacious Russian think tank, Institute for Foreign Policy Research & Initiatives, www.invissin.ru that boarded ritzy Marriott Aurora in Moscow to test fire a new revolutionary manifesto – International Conference “NATO: myths and reality lessons for Russia and the world”.

To pierce thru the conspiracy of Euro worriers’ groupthink, mainstream media gag order and smug complacency of illiterati, the Russian think tank deployed a quartet of mind explosive experts:

The panel of western sages, upon thorough deliberations, dispelled the myths about altruistic motives and peacenik nature of the Atlantic creature and vivisected in graphic details its ulterior instincts and hypocritical posturing.

The Strategy of Tension and Destabilization prescribed by Washington for Brussels’ internal policy and sealed by secret protocols – standard operating procedure for every newcomer – under the guise of plausible deniability, creatively exploited scare tactics by false flag terrorism operations among the European member countries on their very own homeland.

Operation Gladio had a two-pronged hidden agenda: on the one side, to discredit and marginalize grass-roots democratic movement and left-wing parties and, on the on the side, to genetically modify Europe into the nuclear Forward Operating Disneyland against the USSR, populated by docile USIA lotus-eaters.

Despite the overwhelming evidence, NATO HQ continues to deny the obvious and neither its rep nor US Embassy officials in Moscow had the guts to show up at the Conference to face the music.  Ditto to the glasnost-searching Western media.

From internal witch-hunting to anti-Soviet hysteria

On the contrary, it was a long-term information warfare hoax, concocted by the CIA for the broadcasting by the US and NATO propaganda mills.  The declassified documents from the Soviet archives have revealed that the USSR never intended, even in contingency planning, to invade the Western Europe, but it was deeply concerned by the aggressive attitude of the Atlantic Alliance.

As for GWOT, the notorious global war on terror, the Italian professor paid attention to the fact that according to the main databases – both in the US –international terrorism has peaked out in ‘80s and, if anything, NATO, as a Cold War relic, designed for the conventional military onslaught against the USSR, is inherently incapable to handle any type of asymmetrical challenges, including homegrown or foreign terrorism.

Alfred Ross, the only US scholar at the conference, unveiled the mendacious and expansionist modus operandi of the Western Coalition as SS-worshiping Russia-carving transatlantic organized crime cartel, implicated in fomenting extremism, promoting narco-terrorism and conducting humanitarian bombing.

On SS success in the US:

At the end of WWII Nazi General Adolf Heusinger, who led the planning of Operation Barbarossa against the USSR, had been recruited by the CIA for a secret project, run by the former head of Nazi military intelligence on the Eastern Front, Gen. Reinhard Gehlen – again, against the Soviet Union.

“The US, which had entered the war only after the Russians had won the decisive victories at Stalingrad and Kursk, reorganized the surviving Nazi war criminals into yet another anti-Russian criminal project: NATO, which evolved directly out of the CIA recruitment and sponsorship of the leading cadres of the Third Reich and allied fascist states.”

Well, the Nazi Generals’ contribution in US ‘peace-building’ efforts were duly noted: in 1956 the CIA installed General Reinhard Gehlen as head of the West German BND and in 1960 President Gen. Eisenhower appointed General Adolf Heusinger to be Chairman of the Military Committee of NATO.

“As even the German journal Der Spiegel admitted in a report of November 26, 2009, the West lied to Russia that NATO would not expand east after German reunification.”

On promoting democracy and human rights:

“The pattern of NATO expansion was generally the same: leading with covert funding through the network of US “color revolution” funding sources, in particular the Soros Foundation, Freedom House, and the National Endowment for Democracy. The real goal of these operations is evidenced by the central role in these color revolutions of the US Committee to Expand NATO, later renamed the Project on Transitional Democracies. The US Committee to Expand NATO was run by military intellligence agent and Lockheed VP Bruce Jackson, whose father had played a key role in the creation of the Central Inteligence Agency.”

“NATO is now the most massively armed terrorist organization in the world with vast capacities and is constructing an infrastructure of drugs and political and economic corruption to further its effort to achieve world hegemony.”

It was a shocker to hear who actually rules the USA: “In America oil companies tend to dominate both U.S. foreign policy and also the U.S. Congress.  This explains why presidents from Kennedy to Reagan to Obama have been powerless to limit the oil industry’s special tax break called the oil depletion allowance, even now when most Americans are sinking deeper into poverty.”

Petro power has always fueled and lubricated Uncle Sam’s insatiable lust for full-spectrum freedom & democracy: “Oil has been a deep driving force behind all recent U.S. and NATO offensive actions: Afghanistan in 2001, Iraq in 2003, and Libya in 2011.” Hence US OIL & War axis of evil: OIL is just CIA shorthand for Operation Indefinite l Liberty.

Here’s rock-solid foundation & justification for US global domination: “Washington serves the interest of western oil companies, not just because of their corrupt influence over the administration, but because the survival of the current U.S. petro-economy depends on western domination of the global oil trade.”

Eventually, a new US ‘forward strategy of freedom’ of drugs & blood  has finally crystallized:

“Those hegemonic hawks in the CIA and Pentagon have pushed for a U.S. strategy of unipolar global domination. [They] have not hesitated to use drug-trafficking assets in pursuit of this unattainable goal, notably in Indochina, Colombia, and now Afghanistan.”

“More relevant to Russia was a 2002 covert operation in Azerbaijan, a classic exercise in deep politics. There former CIA operatives, employed by a dubious oil firm (MEGA Oil), “engaged in military training, passed ‘brown bags filled with cash’ to members of the government, and set up an airline…which soon was picking up hundreds of mujahidin mercenaries in Afghanistan.”  These mercenaries, eventually said to number 2000, were initially used to combat Russian-backed Armenian forces in the disputed region of Nagorno-Karabakh; but they also backed Muslim fighters in Chechnya and Dagestan. They also contributed to the establishment of Baku as a transshipment point for Afghan heroin to both the Russian urban market and also the Chechen mafia.”

Thus the myth about joint fight against the ‘common threats’ between the US, NATO and Russia has been rendered inoperable.

Corollary: don’t be fooled by NATO statements, judge it strictly by its deeds. For that matter, the Conference in Moscow has offered the exhaustive arsenal to detox the pernicious propaganda of the Alliance of Unwilling.