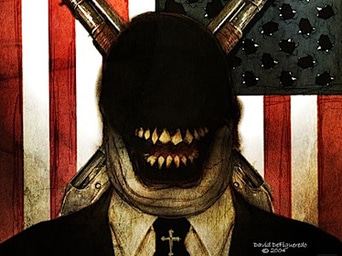 “If there’s any nation in the world that is well on the way to meriting the admittedly vague label of ‘fascist,’ surely it is the United States,” political journalist Alexander Cockburn asserts.

In the May 21st issue of “The Nation,” magazine columnist Cockburn reels off a list of characteristics of fascist societies which seem, unfortunately, to apply to the U.S. today. Following are some of those characteristics he cited:

(1) “A fascist regime is the sworn foe of the right to assembly, ‘unauthorized’ marches and encampments,” Cockburn points out. This, of course, was demonstrated only a few days ago in Chicago at the summit meeting of the NATO ministers. Police tactics were so heavy-handed that it took exemplary courage for demonstrators to turn out. A few weeks earlier in Syracuse, N.Y., area sheriffs arrested 33 protesters for the offense of walking on a public road! The “Hancock 33” had not even reached the Air Force base of that name to protest its drone warplanes when stopped. “America is a network of SWAT teams and kindred state-employed thugs on permanent red alert,” Cockburn says.

(2) “A fascist regime spies obsessively on its citizens,” Cockburn says. “Study U.S. laws on secret surveillance since the Patriot Act and you will find procedures that would have been the envy of the East Germans.” Additionally, the U.S. has spied on virtually the entire world through its ECHELON system, eavesdropping even on the telephones of the Pope and the Secretary-General of the United Nations. Washington reporter Bill Blum has described the National Security Agency as running “a vacuum cleaner in the sky.”

(3) “Fascist régimes, ultimately the expression of corporate power, repress labor in all efforts to organize,” Cockburn writes. “The onslaught here began with Taft-Hartley in 1947 and continued with methodical ferocity during the Reagan and Clinton years.” What’s more, he adds, “Obama reneged on pledges to make organizing easier, froze the wages of federal workers and advanced free trade across the globe. Attacks on collective bargaining are pervasive.” The rolls of organized labor members today are approximately only one-third as numerous as they were in 1950, dropping from 36-million to12-million.

(4) “Fascism…is a system of extreme, methodical state repression, violent in contour and threat, buttressed by ultra-nationalist mythology, a militarist culture and imperial ambition.” In the 1980s, Cockburn continues, “America started locking up its poor people.” In 2009, 7-million adults were under correctional supervision, he said. We might add here that 2.4 million people are behind bars in U.S. prisons today, thousands for victimless crimes, and tens of thousands in inhuman, mind-destroying solitary punishment cells. Overcrowding is widespread and ever more prisoners are being held in “privatized” confinement—prisons whose administrators have a vested financial interest in making them serve maximum time.

(6) “Ultimately a fascist state claims the right to imprison its victims without term or hope of redress or legal representation.” As the executive power, Cockburn writes, in the form of the president, “it claims the right to kill its enemies, whether citizens (Awlaki) or others (Guantanamno), without judicial review. In other words, rule by decree—which is what Hitler’s Enabling Act won him in March 1933.”

Cockburn concludes: “We live in a fascist country—“proto-fascist” if you want to allay public disquiet, though there’s scant sign that most

Americans are disturbed by the trends.”

Sherwood Ross is a public relations consultant “for good causes” who also writes on political and military topics. He former worked for major dailies and wire services. Reach him at [email protected]