Yesterday, police in Aurora, Colorado, a department noted for poor discipline, poor standards and lax training, arrested and handcuffed 42 innocent civilians, even holding shotguns at the heads of small children.

All those held were arrested at gunpoint, roughed up, all were cuffed but the smallest of children, as young as two years.  Some small children were, barely able to walk and speak, were subjected to detention with a dozen or more weapons on them, all loaded, safeties off, ready to fire.

Though the suspect, carefully identified, video taped, was 45 years old, male, white and quite large, the majority of those arrested were women, small children or minorities.

“Protect and Defend” is what it says on the cars but increasingly, American citizens are arming themselves, not radicals but hard working, tax paying middle class Americans, arming themselves against their own police, as department after department fall under the control of the Mexican drug cartels and forget the oaths they once swore but now now longer remember.

Is Aurora, its city government and police a “cartel town?”  Things are beginning to look that way and not just this incident.  The cartels first went after Arizona, where their control is increasing every day.  Their next target, having Utah in their pocket 100%, that and Nevada, is Colorado.  Denver will be “ground zero” and police in the Denver area, starting with outlying regions will be among the first cartel recruits as real terrorism comes to America.

Denver will be key, with it’s downtown of major banks, long known for laundering drug money, the same town where hundreds of millions were stolen in the staged bankruptcies of the Columbia and Silverado Savings and Loans, where Washington politics, drug money and the local mob made a killing.  We are watching Denver.  Anyone remember Neil Bush or that attempted killer of President Reagan, Bush family associate John Hinckley, from the famous family of Mormon prophets, came from Denver?

This is the kind of behavior Americans around the country have been terrified would begin, that their own police would turn on everyday citizens, an armed gang.  Stifling dissent of the “occupy” movement, taking payoffs from “banksters” is one thing but, not the photo above, that is a 12 ga. shotgun inches from the face of a small child.  That is a felony, not just a violation of “police procedure.”

That is a child, he is being terrorized and, in doing so, according to all our new laws, the officers involved belong in prison, not in the US but Poland or Egypt or Bulgaria, where hundreds of hours of waterboarding can get their confessions.  It is time that we recognized the real American terrorists, the real threat to democracy we have created.

They were looking for bank robbers and they did make their arrest, be clear on this.  However, they violated numerous criminal laws, unlawful imprisonment, false arrest, assault with intent, or “GBH” as it is known in police jargon.  In fact, they did everything wrong.

As Judge Napolitano rightly points out, a police department, poorly trained, out of control, with no respect for law, put the lives and safety of dozens at risk by performing a dangerous arrest while dozens of potential victims were handcuffed in the immediate vicinity and hundreds of bystanders were around.

They never gained control of the scene, instead, intending to bring about a “wild west” shootout, killing as many innocent civilians as possible.

It was the bank robbers themselves that have to be credited with using good sense in surrendering instead of taking hostage the dozens police put under their power through pure idiocy, criminality and incompetence.

Standard police procedure would be to set up a checklane with chase cars at the rear, separate cars by a safe distance and secure the lives of innocent bystanders first, not arrest, handcuff and detain them at gunpoint.

My own experience is managing a group which includes former top FBI trainers, including founders of the FBI hostage rescue training center in Qantaco, VA along with members of other elite US, UK, French, South Korean, Greek and other services from SWAT to counter-terrorism.  We will be glad to travel to Aurora and, after doing thorough background checks on all local officials and police, make recommendations. Don’t depend on many keeping their jobs and we will report all evidence we find of criminal activity to the FBI.

My suspicion is that we would guarantee a dozen agents a year’s work at least.

The US spends millions each year from the federal budget  specifically to train police officers not to point shotguns at small children.  The man above is guilty of assault with a deadly weapon and his police career needs to be traded in for one that involves long term incarceration as do the officers assisting him and those who approve this behavior.

This is criminal behavior in Colorado, unconstitutional in the US and a war crime according to the rules governing the International Criminal Court at the Hague.

This is Judge Napolitano wrote exclusive commentary on this incident for the Fox News Insider.

The big picture here is that the police in this small Colorado town applied tactics that are forbidden by the U.S. Constitution, and which were perfected by the SS in Nazi Germany, in order to make their job easier. Nazi Germany had the lowest crime rate of any modern society; but it had no freedom. The cops and the SS regularly arrested groups until they found the person they wanted. We fought World War II in large measure to prevent such behavior by the government.

Here is the law. The government may stop a person temporarily–for a few minutes and in public–and ask questions of the person only when it has “articulable suspicion” about that person. The suspicion must be based on objective observations, not immutable characteristics (such as race or gender) or group characteristics (such as location or beliefs). The government may only arrest a person–prevent movement using restraints or force for more than a few moments–when it has probable cause to believe that the arrested person has committed a crime. The standard for arrest requires a “more likely than not” objective conclusion of criminal behavior on the part of the arrested person.

The behavior of the cops on Aurora, CO will cost the town a great deal of money; and it should provoke a federal criminal investigation of the police behavior. The Aurora police violated basic constitutionally-guaranteed rights, federal law, rights guaranteed by the Colorado Constitution, and state law.

It is estimated that lawsuits covering this police outrage will cost Aurora, Colorado in excess of $200 million dollars.

As a Mitt Romney follower, I think the first thing to pay for this should be the police retirement fund, their health insurance and a 50% cut in pay and the elimination of all overtime.

Let patrolmen use their own cars, buy their own gas, if they are going to act like a criminal gang, make them work in uniforms with a simple sign:

Oh, and before I forget,  from now on, rubber guns only.

Another suggestion, fire the lot, from the Chief down, replace them with unemployed veterans who have at least two years of college and are not felons, not big felonies anyway, which would normally exclude them from working in Aurora.  Will Attorney General Eric Holder let this go by as he has so many other constitutional violations, will he fail to enforce these federal crimes, rogue police who have, this time, actually turned on white middle class Americans, the only group Americans are told police are meant to protect?

Next time you may need to visit Aurora, Colorado, perhaps you had best ask your friends to meet you on “American territory” where there are laws. 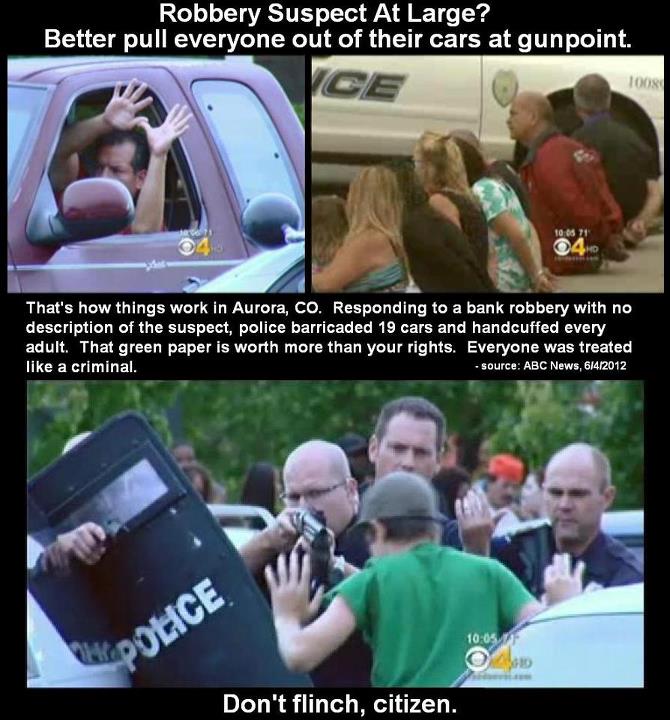