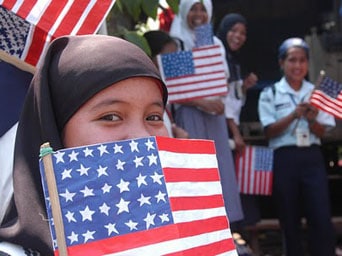 Muslims may make up fewer than one percent of the U.S. population but they were nearly 13 percent of victims of religious-based hate crimes in 2010, “The Nation” magazine reports (July 2nd).

“These crimes include intimidation, burglary, arson, vandalism, and aggravated assault,” writes author Laila Lalami, a professor at the University of California, Riverside. What’s more, “they target not just Muslims but also people who are mistaken for Muslims—Sikh men, for instance.”

Anti-Muslim attitudes have reached deep into the workplace. Muslims make up only about 1 percent of the U.S. population but account for more than 20 percent of religion-based filings with the Equal Employment Opportunity Commission.

Moustafa Bayoumi, a professor at Brooklyn College, City of New York, writes in a related “Nation” article, that until a few years ago American Muslims were regarded with suspicion of engaging in terrorist activities, but “the new narrative operates more along the axis of culture.”

“Simple acts of religious or cultural expression and the straightforward activities of Muslim daily life have become suspicious,” he explains. (Indeed, the ACLU reports that anti-mosque activity has taken place in more than half the states in the country.)

Bayoumi notes that Muslims filing for divorce invokes the bizarre charge of “creeping Sharia” and a dual-language Arabic-English high school in New York gets demonized as a “madrassa.”

Incredibly, some of the anti-Muslim hatred is being stoked by Federal and local law enforcement agencies. Last September, “Wired” broke the story that the FBI makes wild charges about Muslims to the counterterrorism agents it trains. Bayoumi accuses the FBI of spreading the line that “mainstream American Muslims are probably terrorist sympathizers, that the Prophet Muhammad was a ‘cult leader’ and that the religiously mandated practice of giving charity in Islam is no more than a ‘funding mechanism for combat.’”

Bayoumi points out that the NYPD as part of its training screened “The Third Jihad,” a film that claims “the true agenda of much of Islam in America” is “a strategy to infiltrate and dominate” the country.

At the forefront of this spreading prejudice, “is a series of well-funded, politically motivated campaigns dedicated to painting Islam as an inherently violent and savage religion,” writes award-winning author Jack Shaheen.

“These campaigns are the work of a small group of wealthy donors, misinformation specialists like Rush Limbaugh and Glenn Beck, and groups of interconnected anti-Islam organizations: Steven Emerson’s Investigative Project on Terrorism, Daniel Pipes’s Middle East Forum and so forth.”

“Together,” Shaheen continues, “they pound home the myth that mainstream Muslims have ‘terrorist’ ties, that Islam is the new global ideological menace and that Muslims are intent on destroying Western civilization.”

One film that Shaheen scores is “Obsession: Radical Islam’s War Against The West,” brought out in 2005 by the Clarion Fund, a pro-Israel nonprofit organization. “Steeped in hatred, the film’s…frighteningly Islamophobic message…draws parallels between Islam and Nazism.” Clarion persuaded major dailies to distribute 28 million DVD copies to their readers without charge, he writes in “The Nation’s” July 2nd issue.

Bayoumi warns that “anti-Muslim attitudes are not merely absorbed by law enforcement and the military or reflected on the airwaves and in the words of our politicians. Rather, the idea that American Muslims are to be feared or loathed or excluded from the United States is being actively promoted.”

Sherwood Ross is a Miami-based public relations consultant who formerly worked in a professional capacity in the American civil rights movement. Today he directs a PR firm “for good causes.” Reach him at [email protected]