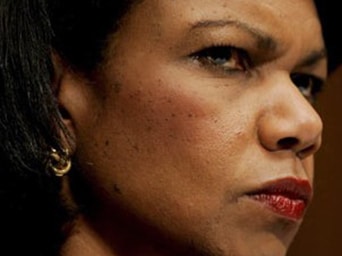 In her newly published 750-page book, “A Memoir of My Years in Washington: No Higher Honor,” former Secretary of State Condoleezza Rice proudly describes her efforts to defeat Armenian Genocide resolutions on two separate occasions.

With great relish, she brags about her success in undermining the acknowledgment of the Armenian Genocide by the U.S. Congress in 1991 and 2007.

A close scrutiny of Rice’s arguments exposes her flawed judgment and ethical lapses.

In her memoir, she relates that her first experience “with this problem” was in 1991, when she worked in the White House as acting special assistant to Pres. George H. W. Bush. Her task was “to mobilize an effort to defeat the resolution in the House of Representatives.”

Gloating over her triumph, she depicts herself as battling..

“the powerful Armenian American lobby” that “has for years pressured Congress to pass a resolution branding the Ottoman Empire’s mass killings of Armenians starting in 1915 as genocide.”

In reality, she had no need to counter what had already been acknowledged by the House of Representatives in 1975 and 1984, and by Pres. Ronald Reagan in 1981.

Rice proceeds to maintain that “there are many historical interpretations of what happened,” which is totally untrue, as there are no historical disputes on the Armenian Genocide — a universally acknowledged fact.

Furthermore, Prof. Rice does not seem to realize that when she describes the Armenian “killings” as “clearly a brutal, ethnically motivated massacre,” she in fact is recognizing them as genocide, as defined under Article 2 of the UN Genocide Convention.

In her memoir, Rice attempts to justify her obstructionist maneuvers by explaining that the Turks “were outraged at the prospect of being branded for an event that had taken place almost a century before — under the Ottomans!”

Instead of behaving as the spineless official of a banana republic, Rice should have sternly admonished the Turks that the United States would not distort historical facts to appease the paranoid leaders of an autocratic state!

Boasting about how well she “had succeeded” in her “assigned task,” Rice callously describes her appalling efforts in “fighting off the dreaded Armenian genocide resolution.”

She makes a half-hearted attempt to minimize her ethical transgression by stating that no one denies “the awful events or the tragic deaths of hundreds of thousands of innocent Armenians,” which even Turkish officials acknowledge.

If she was aware that no one was denying the mass murder of Armenians, why was Rice so fervently determined to kill the resolution?

She then parrots the nonsensical Turkish propaganda that this issue should be left to “historians — not politicians — to decide how best to label what had occurred.”

Rice should have known that reputable historians the world over have already declared that the Armenian killings constituted genocide.

As Secretary of State in 2007, Rice once again battled against the adoption of an Armenian Genocide resolution.

She reports that she “begged” House Speaker Nancy Pelosi to prevent the House from voting on the resolution, but the Speaker rejected her request.

Rice and Defense Secretary Bob Gates then delivered a press statement against the resolution, standing in front of the White House. She also got eight former secretaries of state to sign a joint letter opposing the resolution.

Rice proudly states in her memoir that she managed to block the vote on the resolution, in keeping with her promise to the Turks. Once again, instead of defending the noble values and high principles on which America was founded, the secretary of state of the most powerful nation on earth caved in to the diktats of a third world bully!

Concluding her narrative, Rice makes false accusation against Armenia’s leaders, claiming that… “the democratically elected Armenian government had little interest in the resolution. In fact, it was engaged in an effort to improve relations with Turkey, and it didn’t need it either.”

Rice is contradicting the U.S. government’s public announcement that the 2003 Armenian presidential elections did not meet international standards.

Furthermore, the then Pres. Kocharian did not oppose the genocide resolution and was not seeking to improve Armenia’s relations with Turkey.

In fact, a State Dept. official reported that during his meeting with Kocharian in Yerevan, the Armenian President was “in a foul mood” because the White House had just blocked the genocide resolution.

Rice is now a professor at Stanford University. Ironically, another Armenian Genocide denier, former Secretary of State George Shultz, is also at Stanford.

Faculty members, students, alumni and donors should advise Stanford University officials that genocide deniers are not welcome at one of America’s most distinguished institutions of higher learning.

Readers are urged to fax Prof. Rice at 1-650-721-3390, expressing displeasure at her appalling efforts against U.S. acknowledgment of the Armenian Genocide.

[Editors Note: Another glaring disgrace in this sordid episode were the FBI translator, Sibel Edmonds disclosures regarding former House Speaker Dennis Hastert getting paid off by the Turks. See the details at this Democracy Now link.Hastert must have impressed the Turks as he pick up a $35,000 monthly lobbying contract from the Turks shortly after retiring.

The Intel community refers to this sordid game as the Congressional deferred income bribery retirement program, something that even mass media has chosen to accept as just part of everyday corruption at the highest levels of our government. Even high ranking military officers and Department of Defense people participate in this special differed income program  …Jim W. Dean]