Home Veterans George W. Bush and the Neocons are Guilty of Aiding and Abetting... 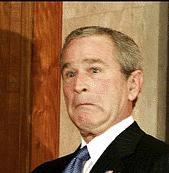 Iraq under Saddam Hussein was largely a secular Islamic state. He kept radical Islamic groups, particularly al-Qaeda, out of Iraq.

When George W. Bush and his neoconservative advisers decided to start the unnecessary war in Iraq to remove Saddam, which was done primarily to stop Saddam from paying $25,000.00 to the families of Palestinian suicide bombers who bombed Israel, Bush and his cohorts opened up the entire nation of Iraq to al-Qaeda. It allowed al-Qaeda in Iraq to be firmly established for the first time ever. And it lead to the deaths of thousands of Americans and over 100,000 Iraqis.

A key neoconservative who promoted the war to George W. Bush was Paul Wolfowitz. The January 27, 2003 edition of Time magazine ran an article titled, “Bush’s Brainiest Hawk” in which it credited Wolfowitz, who was at that time Bush’s Deputy Defense Secretary, as being the one who originally planted the idea in Bush’s tiny little malfunctioning brain to start the unnecessary war in Iraq. Wolfowitz is a Jewish neoconservative who wants more than anything to see Israel rule the world as the Hebrew Bible/Old Testament god promised Israel would. For example, Deuteronomy 28:1 has God saying he will set Israel “on high above all nations of the earth” and Isaiah 60:12 has God saying that any nation that will not serve Israel “shall perish; yea, those nations shall be utterly wasted.” Quite a threat from the Jewish god! The neocons are strongly grounded on the Hebrew Bible/Old Testament. Hebrew/Jewish/Israeli superiority run rampant through the Old Testament/Hebrew Bible.

By starting the unnecessary war in Iraq which only benefited Israel Bush and the neoconservatives violated their own Patriot Act which outlaws providing support to al-Qaeda. If it wasn’t for Bush and gang starting the war with Iraq there would not be al-Qaeda in Iraq. Bush did for al-Qaeda what they could not do for themselves – remove Saddam and make Iraq a home for al-Qaeda. The leader of al-Qaeda in Iraq, Abu Bakr al-Baghdadi recently said their strongholds will soon be returning in Iraq. Yesterday’s and today’s catastrophic shootings and bombings against Shi’ite Muslims in Iraq which so far has killed 107 people and wounded at least 268 others shows he is serious about reestablishing al-Qaeda strongholds in Iraq.

The “Mission Accomplished” banner cannot even now be raised in regards to the “official” reason and mission of the Iraq War. However, the unofficial goal of removing Saddam to make the Jewish state of Israel more secure as well as making secure the political careers of US politicians from both parties who approved of the war and who serve Israel by selling out America for Israel’s interests was accomplished.

Everyone, including Americans, needs to learn how to question authority and to think critically. This will create a protective firewall against the war-mongers. Critical thinking is only made possible by our gift from God of reason. We need to always apply and use our reason in all matters, including religion. The absolute importance of reason is made clear by this quote from the American Revolutionary war hero and Deist Ethan Allen. It is taken from his thought provoking book on God and religion, Reason: The Only Oracle of Man. It reads, “Those who invalidate reason, ought seriously to consider, whether they argue against reason with or without reason; if with reason, then they establish the principle, that they are laboring to dethrone, but if they argue without reason, (which, in order to be consistent with themselves, they must do) they are out of the reach of rational conviction, nor do they deserve a rational argument.”