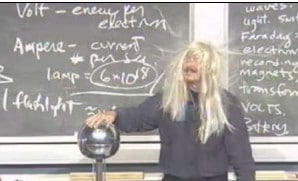 “Three years ago I identified problems in previous climate studies that, in my mind, threw doubt on the very existence of global warming,” UC Berkeley astrophysics Professor Richard A. Muller wrote in an opinion piece in The New York Times.

“Last year, following an intensive research effort involving a dozen scientists, I concluded that global warming was real and that the prior estimates of the rate of warming were correct. I’m now going a step further: Humans are almost entirely the cause,” he wrote.

“The average temperature of the Earth’s land has risen by 2 1/2 degrees Fahrenheit over the past 250 years, including an increase of 1 1/2 degrees over the most recent 50 years,” wrote Muller, who founded the Berkeley Earth Surface Temperature project to debunk unsupported global-warming claims.

“Moreover, it appears likely that essentially all of this increase results from the human emission of greenhouse gases.”

He said he and his colleagues “were not expecting this, but as scientists, it is our duty to let the evidence change our minds.”

He called his new stance “a total turnaround.”

His research was funded with $150,000 from the Charles G. Koch Charitable Foundation, which, along with its libertarian petrochemical billionaire founder, has historically backed groups that deny climate change.

The research also received $100,000 from the Fund for Innovative Climate and Energy Research, created by Bill Gates.

Koch foundation spokeswoman Tonya Mullins told the Los Angeles Times in an e-mail her foundation’s support had no bearing on the research results.

“Our grants are designed to promote independent research; as such, recipients hold full control over their findings,” she wrote. “In this support, we strive to benefit society by promoting discovery and informing public policy.”

Muller’s team gathered and merged a collection of 14.4 million land temperature observations from 44,455 sites around the world dating from 1753. Previous data from NASA, the U.S. National Oceanic and Atmospheric Administration and other sources went back only to the mid-1800s and used a fifth as many weather station records.

Muller said his team’s analysis suggested land temperatures would rise another 1.5 degrees in the next 50 years, but if China continues to use coal at its current rate, the warming could occur in less than 20 years.

Muller’s peer-reviewed research results were posted on the BerkeleyEarth.org Web site Sunday night. They are to be published by the Journal of Geophysical Research.

Michael E. Mann, director of the Earth System Science Center at Pennsylvania State University — who has faced hostility from climate skeptics for his “hockey stick” graph showing a rapid rise in 20th century temperatures — said on Facebook he found “a certain ironic satisfaction in seeing a study funded by the Koch brothers — the greatest funders of climate-change denial and disinformation on the planet — demonstrate what scientists have known with some degree of confidence for nearly two decades: that the globe is indeed warming, and that this warming can only be explained by human-caused increases in greenhouse gas concentrations.

“I applaud Muller and his colleagues for acting as any good scientists would, following where their analyses led them, without regard for the possible political repercussions (they are of course almost certain to be attacked by climate change deniers for their findings),” he wrote.