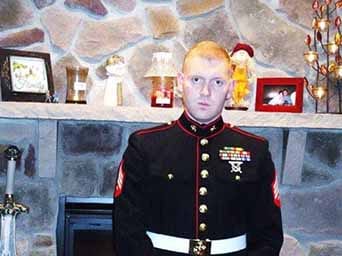 The Truth by Brandon J Raub on Friday, November 11, 2011 at 10:00 am. America has lost itself. We have lost who we truly are. This is the land of the free and the home of the brave.

While the FBI has used the term ‘terrorist in nature’ to describe their reason for picking him up, they are ducking to explain what exactly Brandon had posted qualified for that treatment.

That is a strong indication they want to keep their options open. This alone smells like a rat as they are obligated to disclose their probable cause. I would not be surprised to see a big push for an FBI professional ethics investigation here, the sooner the better.

I think it may be time to take a look at whether the FBI is really the best agency to use in such situations. They just don’t seem to have the skill sets to do it properly. And the ‘veteran bogeyman climate’ that has been created by Homeland Security also needs a good airing and some changes.

This is the land of Thomas Jefferson.

This is the land of Benjamin Franklin.

This is the land of Fredrick Douglas.

This is the land of Smedley Butler.

This is the land John F. Kennedy.

This is the land of Martin Luther King.

[Editors Note: Dear folks, I have sifted through the videos and picked this phone interview with Brandon from the John Randolph Medical Center, and then another with his family after his facebook posting. If you can find any terrorism in it please point it out to us as all of our counter terrorism people can’t…Jim W. Dean]

We have allowed ourselves to be deceived and seduced by the powers of the printing press. It is not a good system. It discourages saving: the foundation for all stable economic activity. The Federal Reserve is artificially manipulating interest rates and creating phony economic data.

This thing has deceived our entire nation.

They created it in 1913. They also created the income tax in 1913. They encouraged the growth of debt so they can tax you on it. There is interest on the debt. Your government is in bed with these people. They want to enslave you to the government so that they can control every aspect of your lives. It is an empire based on lies. They operate of greed and fear.

There is a better way. It’s called freedom. Freedom is called a lot of things. But there is a true meaning. It means very simply that you have the right to do whatever you want as long as you are not infringing on the freedoms of other people.

I firmly believe that God set America apart from the other nations of the world. He saved a place where people could come to to escape bad systems of goverment. This system we have created works. It really works.

There is evil going on all around the world. The United States was meant to lead the charge against injustice, but through our example not our force. People do not respond to having liberty and freedom forced on them.

Men and Women follow courage. They follow leadership, and courage. Our example has paved the way for people all around the world to change their forms of government.

Force is not the way because liberty is a powerful concept. The idea that men can govern themselves is the basis for every just form of government.

We can govern ourselves. We do not need to be governed by men who want to install a one world banking system. These men have machine hearts. Machine and unnatural hearts.

They have blocked out the possibility of a better world. They fear human progress. They have monopolies on everything.

These people have been hiding technology. There are ways to create power easily. There is technology that can provide free cheap power for everyone. There are farming techniques that can feed the entire world.

The Bill of Rights is being systematically dismantled. Men have spilled their blood for those rights.

They have done some extraordinary acts. Their deeds go before them. But these wars are lies. They are lies. They deceived our entire nation with terrorism. They have gotten us to hand them our rights. Our Rights! Men died for those rights!

September Eleventh was an inside job. They blew up a third building in broad daylight. Building 7.

Your leaders betrayed you.

You elected an aristocracy. They are beholden to special interests. They were brainwashed through the Council on Foreign Relations. Your leaders are planning to merge the United States into a one world banking system. They want to put computer chips in you.

These men have evil hearts. They have tricked you into supporting corporate fascism. We gave them the keys to our country. We were not vigilant with our republic.

There is hope. BUT WE MUST TAKE OUR REPUBLIC BACK.

Interview with Brandon’s family next.

Here is the group’s complete, unedited statement on the incident:

The Rutherford Institute has come to the defense of a former Marine, 26-year-old Brandon Raub, who was arrested, detained indefinitely in a psych ward and forced to undergo psychological evaluations based solely on the controversial nature of lines from song lyrics, political messages and virtual card games which he posted to his private Facebook page.

Although the FBI and Chesterfield County police have not charged Brandon Raub, a resident of Chesterfield County, Va., with committing any crime, they arrested Raub on Thursday, August 16, 2012, and transported him to John Randolph Medical Center, where he was held against his will due to alleged concerns that his Facebook (FB) posts were controversial and “terrorist in nature.”

In a hearing held at the hospital, government officials disregarded Raub’s explanation that the Facebook posts were being interpreted out of context, sentencing him up to 30 days’ further confinement in a VA psych ward.

In coming to Raub’s defense, Rutherford Institute attorneys are challenging Raub’s arrest and forcible detention, as well as the government’s overt Facebook surveillance and violation of Raub’s First Amendment rights.

“For government officials to not only arrest Brandon Raub for doing nothing more than exercising his First Amendment rights but to actually force him to undergo psychological evaluations and detain him against his will goes against every constitutional principle this country was founded upon. This should be a wake-up call to Americans that the police state is here,” said John W. Whitehead, president of The Rutherford Institute.

“Brandon Raub is no different from the majority of Americans who use their private Facebook pages to post a variety of content, ranging from song lyrics and political hyperbole to trash talking their neighbors, friends and government leaders.”

Brandon Raub, a Marine who has served tours in Iraq and Afghanistan, was detained by FBI agents and police officers at his home in Chesterfield County based upon the nature of content posted to his Facebook page in recent months.

Like many Facebook users, Raub uses his FB page to post songs lyrics and air his political opinions, as well as engage in virtual online games with other users.

On Thursday, August 16, police and FBI agents arrived at Raub’s home, asking to speak with him about his Facebook posts. They did not provide Raub with a search warrant. Raub was cooperative and agreed to speak with them.

Without providing any explanation, levying any charges against Raub or reading him his rights, law enforcement officials then handcuffed Raub and transported him first to the police headquarters, then to John Randolph Medical Center, where he was held against his will.

Outraged onlookers filmed the arrest and posted the footage to YouTube. Law enforcement officials have stated in press reports that Raub was not arrested. However, as attorney John Whitehead points out, if the police have put handcuffs on you and you’re being held against your will, that qualifies as an arrest.

In a hearing before a judge on August 20, government officials again pointed to Raub’s Facebook posts as the sole reason for their concern and for his continued incarceration.

Ignoring Raub’s explanations about the fact that the FB posts were being read out of context and his attorney’s First Amendment defense, the judge agreed that Raub should be incarcerated at a VA hospital for up to 30 more days. Rutherford Institute attorneys are working to challenge Raub’s detention and the highly unconstitutional nature of the government’s actions.