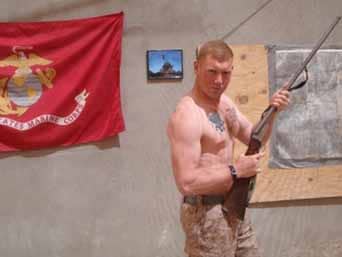 RICHMOND, Va. (AP) — A former Marine involuntarily detained for psychiatric evaluation for posting strident anti-government messages on Facebook has received an outpouring of support from people who say authorities are trampling on his First Amendment rights.

Brandon J. Raub, 26, has been in custody since FBI and Secret Service agents and Chesterfield County police questioned him Thursday evening about what they considered ominous posts talking of a coming revolution. In one message earlier this month, Raub wrote: “Sharpen my axe; I’m here to sever heads.”

Police — acting under a state law that allows emergency, temporary psychiatric commitments upon the recommendation of a mental health professional — took Raub to the John Randolph Medical Center in Hopewell. He was not charged with any crime.

The Rutherford Institute, a Charlottesville-based civil liberties group, sent one of its attorneys to the hospital to represent Raub at a hearing Monday. A judge ordered Raub detained for another month, Rutherford executive director John Whitehead said.

“For government officials to not only arrest Brandon Raub for doing nothing more than exercising his First Amendment rights but to actually force him to undergo psychological evaluations and detain him against his will goes against every constitutional principle this country was founded upon,” Whitehead said. “This should be a wake-up call to Americans that the police state is here.”

Raub’s mother, Cathleen Thomas, said she was not surprised by her son’s plight.

“We’re seeing our government overstepping its bounds again and again on the Constitution,” she said in a telephone interview. “The bottom line is his freedom of speech has been violated. It was his patriotic right and duty to make those grievances known.”

Thomas said her son, who served tours as a combat engineer in Iraq and Afghanistan, is “concerned about all the wars we’ve experienced” and believes the U.S. government was complicit in the Sept. 11 terrorist attacks. One of his Facebook posts, she said, pictured the gaping hole in the Pentagon and asked “where’s the plane?”

“I want the country to know who he is — that he’s not crazy, he’s a staunch patriot,” Thomas said.

Whitehead said he found nothing alarming on in Raub’s social media commentaries.

“The posts I read that supposedly were of concern were libertarian-type posts I see all the time, so I don’t know what supposedly triggered this,” he said. “I see worse stuff.”

The big concern, Whitehead said, is that government officials are apparently monitoring citizens’ private Facebook pages and arresting people with whom they disagree.

Dee Rybiski, an FBI spokeswoman in Richmond, said there was no Facebook snooping by her agency.

“We received quite a few complaints about what were perceived as threatening posts,” she said. “Given the circumstances with the things that have gone on in the country with some of these mass shootings, it would be horrible for law enforcement not to pay attention to complaints.”

Whitehead said some of the posts in question were made on a closed Facebook page that Raub had just created and that had only three members, so he questioned whether anyone from the public would have complained about them.

“Support Brandon Raub” Facebook pages were drawing significant interest and — along with other Internet sites — had numerous comments from people outraged by the veteran’s detention.

Raub’s supporters are characterizing the detention as an arrest, complaining that he was handcuffed and whisked away in a police cruiser without being served a warrant or read his Miranda rights. But county and federal authorities say it was not an arrest because Raub doesn’t face criminal charges.

Col. Thierry Dupuis, the county police chief, said Raub was taken into custody upon the recommendation of mental health crisis intervention workers. He said the action was taken in accordance with the state’s emergency custody statute, which allows a magistrate to order the civil detention and psychiatric evaluation of a person deemed to be potentially dangerous. He said Raub was handcuffed because he resisted officers’ attempts to take him into custody.

Whitehead said Raub’s only act of resistance was refusing to allow authorities into his home without a warrant. A video of the incident shot by onlookers and posted on You Tube provides no insight because Raub was already in cuffs when the cameras started rolling.