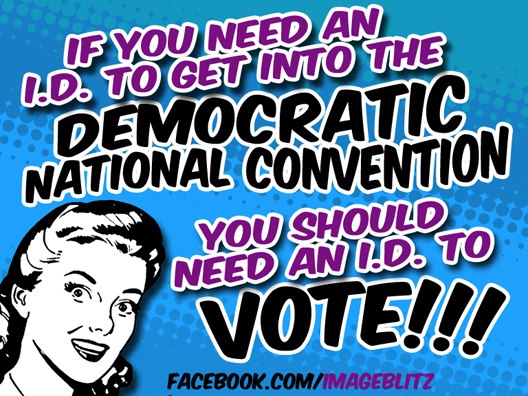 Let’s get this straight…I get carded when I go to the store to purchase beer, wine; or booze at my local liquor store. I have to show a picture ID when I travel and board a plane or train. They want picture ID to purchase cigarettes; and as a matter of fact, you have to have proper identification in most states for the following:

BUT…for one of the most treasured of all our rights as an American, the right to vote, we have the leftists (most Democrats, progressives and liberals), supported by the ACLU, fighting every effort by the states to require ID to vote. Their chant is always the same…”well, there’s no evidence of wholesale voter fraud”.  AND, “minorities are disadvantaged by having to show proper ID”. There doesn’t have to be wholesale voter fraud. One instance is once too often! And if you and I are required to have ID, why not everyone. This is reverse discrimination.

The Democrat National Convention, Labor Union Voting and other events sponsored by, hosted, or supported by Democrats require Photo ID to participate…how’s that for the party so worried about Republicans wanting to keep Granny and poor folks from voting.

If we listen to Jerry Kremer, a former New York state legislator and today, Chairman of Empire Government Strategies, “to ask an 82-year-old woman for her driver’s license at the polling place is clearly a ruse to keep her from casting her ballot”…right, just like all conservatives want to throw grandma under the bus, starve children, and steal money from the poor to give to the rich.

This rhetoric is divisive, unsupportable, and an outright lie, but as Nazi propagandist, Joseph Goebbles, has been attributed, “If you lie big enough and keep repeating it, people will eventually come to believe it”.  Or…said another way…“A lie is as good as the truth if you can get someone to believe it.” Henry Gibson, a comedian, actor.

Mr. Kremer, why even go through the rouse of having people show proof of age when they go get a driver’s license, get a marriage license, purchase a car, qualify for social services, or any other time? If you can answer why identification is needed for all those instances listed above, then maybe you’ll have a clue as to why being able to identify yourself is important. I want someone to show who they are is because as a Veteran, preserving the right to vote was one of the reasons I served. I don’t want some clown being able to cancel out my vote by showing up at the poll illegally.

As to the left’s claim that there is no evidence that “wholesale voter fraud” exists, there is only one way to provide that proof, and that would be to audit every vote cast. That is absolutely impossible from a cost standpoint, and would never be needed if we know who is voting in the first place. Is getting vaccinated against polio a better idea than contracting polio?

A wave of recently-enacted voter ID laws in the U.S. have created an outcry from Democrats, who fear that requiring voters to present photo identification will disenfranchise minorities, students and seniors. Come on…Students have school ID cards which they have to show at school activities, to use the student bookstore, and get student discounts and sporting events. Seniors have their Medicare cards (photo requirements could easily be waved in those cases), but any minority…and I mean ANY MINORITY, can get a state issued ID card. They will need that ID card to identify themselves to local law enforcement officers and for any of the situations listed above.

There are 33 states with voter ID laws that have been enacted in varying details. Two key distinctions are whether a law is strict or non strict, and whether or not the ID must include a photo.

I welcome every reader to digest the significance of the voter ID laws and for Veterans to understand why we served to protect the right to vote. Somewhere in between “strict” and “non strict”, there has to be a simple way to insure only those eligible to vote can vote, not the current system which makes a mockery out of having voter standards.

Let me suggest the following requirements which are modeled on the proposed new voter requirements of a number of states. If you can poke holes in these simple requirements as being unfair, discriminatory, or unworkable, I welcome your comments and proof of why such requirements cannot work:

This is not rocket science but basic common sense. To not recognize this fact makes you part of the problem and accepting of the fact you just don’t care.