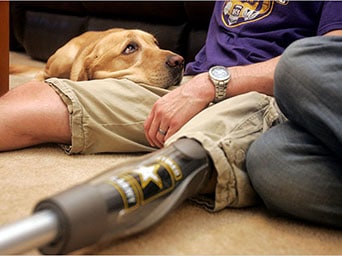 If you’re a Northern California veteran who has waited a year for a decision on a war-related disability claim, you might consider a move to South Dakota — where the U.S. Department of Veterans Affairs typically responds in less than half the time.

Returning home from Afghanistan to New York, Los Angeles, Chicago or Atlanta? Veterans who live in Lincoln, Neb., and Fargo, N.D., get their benefits faster.

The geographic inequity of VA wait times is fully detailed for the first time in an analysis by the Center for Investigative Reporting. Simply put: Veterans in sparsely populated states often encounter quick resolution of their compensation claims for problems ranging from back injuries to post-traumatic stress disorder while those in metropolitan areas languish.

In California, veterans who file claims with any of the VA’s three regional offices — in Oakland, Los Angeles and San Diego — wait more than nine months on average.

“It’s a slap in the face,” said Adam Fields, a former Marine from Modesto, who has been waiting since November 2010 for a ruling on his claim for benefits for traumatic brain injury.

During his two tours in Iraq, Fields said he survived multiple vehicle rollovers and sustained three concussions, which have contributed to persistent short-term memory loss.

“Sometimes I get in the car, and I forget where I’m going,” said Fields, who supports his wife and 5-year-old son by driving a scrap metal truck in Stockton, two hours from the closest VA hospital.

“If the VA approved my claim, I could afford to take time off to get regular treatment,” he said.

The Center for Investigative Reporting’s city-by-city data populates an online interactive map that will automatically update weekly, documenting in real time the progress of recent VA promises to improve.

So far, change has headed in the wrong direction, despite increased media and political scrutiny.

Nationwide, the VA took an average of more than eight months to process a claim in June — about 50 percent longer than the year before. Veterans in New York and North Texas waited the longest, at more than a year on average. Those who appeal a denied claim wait 3Â½ years for an answer.

Why the dramatic differences? A VA spokesman did not respond to numerous email and telephone inquiries seeking an explanation.

Delays have increased despite a new $300 million computer system and 3,300 claims processors hired since 2010 — 765 of them for additional positions.

The department has pledged to eliminate the claims backlog by 2015, but VA data shows the number of veterans waiting for a decision is growing — to more than 907,000 as of July 30, with 832,000 of them waiting for disability or survivor benefits, while thousands more seek a pension or GI Bill education benefits.

To date, the computer system has been launched at just four of the VA’s regional offices, none of them in California. A vast majority of claims still are in paper file folders, which must be physically passed from one claims representative to another.

“If you have ever walked into one of our regional offices, you would see stacks and stacks of paper,” Allison Hickey, the agency’s undersecretary for benefits, told reporters July 11.

By 2015, Hickey said, all 58 offices will be computerized. In the meantime, new claims are arriving more quickly than the backlog is being cleared, so without dramatic improvement, disabled veterans will face even longer wait times in the future.

At the current rate, for example, it would take the VA three years to resolve every disability claim pending in San Diego — the office with the worst combination of backlog and clearance rate in June — if not a single additional claim were filed. In July, Los Angeles stepped into that worst overall slot.

That best-case scenario won’t occur. In 2011, 1.3 million veterans filed claims for benefits, according to VA data, a combination of troops returning from Iraq and Afghanistan and aging Vietnam veterans, many with new claims based on illnesses the government now acknowledges stem from Agent Orange exposure. Since 2010, the agency has seen the number of new claims filed annually increase by 48 percent, while the number of claims representatives has increased by 5 percent.

Improvements in battlefield medicine mean Iraq and Afghanistan veterans are more likely to survive multiple deployments, the VA said in a statement, and as a result, veterans “are returning with triple the medical issues of previous generations, driving the complexity of these claims and their associated workload to an all-time high.”

“When soldiers come home from two, three or four tours with post traumatic stress disorder and hit these kinds of walls, they can get frustrated and just give up,” Meshad said.

Identifying the root of the delays is complicated by political finger-pointing. Democrats and many veterans’ advocates argue that the VA failed to prepare for an onslaught of wounded veterans after the Bush administration began the war in Iraq in 2003. Republicans counter that the backlog of disability claims has exploded under President Barack Obama and has continued to worsen in recent months, despite additional scrutiny from the media and members of Congress.

Some Republicans, including U.S. Rep. Darrell Issa of California, chairman of the House Committee on Oversight and Government Reform, recently have seized on the issue, holding hearings and demanding results.

In response, VA officials have said they are about to turn things around.

“We are already implementing our plan and are getting good early results,” Hickey told a House oversight subcommittee July 18.

But on the ground, there is little evidence that those steps are making a difference so far. Average wait times at all four offices equipped with the new computer system have increased. At three of the four offices, the number of pending claims also has grown.

In Salt Lake City, which has the new system, the average wait time has increased to 236 days — and nearly 20,000 veterans are waiting.

“A lot of this is about respect,” said Dottie Guy, a San Francisco veteran who has waited since March 2011 for a decision on her claim related to PTSD, which began after a tour as a prison guard in Baghdad, and a degenerative ankle injury suffered during basic training.

“What we want is recognition that this is something that happened to you,” Guy said. “I wasn’t asked to go to Iraq, I was told. And now I am asking them to acknowledge that what they forced me to do jeopardized my physical health.”

In April, The Bay Citizen, a part of the Center for Investigative Reporting, revealed that 80 percent of veterans served by the VA’s Oakland office were waiting more than 125 days for an answer on benefits. That prompted U.S. Rep. Jerry McNerney, a Democrat from California who sits on the House Veterans’ Affairs Committee, to write a letter to VA Secretary Eric Shinseki. The letter, signed by 15 colleagues, demanded that Shinseki “send immediate help” to the Oakland office.

The agency responded by shuttering the Oakland office for four weeks in June while providing “challenge training” to claims processors. In an email, VA spokesman Josh Taylor said veterans served by the Oakland office — those living between Tulare County and the Oregon border — “were not adversely impacted by this training effort.”

Yet the data tells a different story. Four months later, 90 percent of claims filed in Oakland have been pending at least four months — the highest proportion in the country.

An inspector general’s report released in May also revealed that staff at the Oakland office failed to process 39 percent of claims correctly.