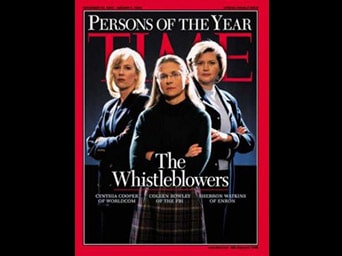 The US government is worried about its ability to keep secrets in the age of the internet. It is targeting three men in particular – Julian Assange, Bradley Manning, and Gary McKinnon – for long-term imprisonment, in order to discourage others from publicizing classified information.

A fourth whistleblower, former CIA asset Susan Lindauer, exposed US and Israeli complicity in the 9/11 attacks – and was indefinitely detained at a US military base in reprisal. Another vitally important whistleblower, US military advisor Gwenyth Todd, barely escaped Bahrain with her secrets and her life; while 9/11 eyewitness Barry Jennings was smeared by the BBC, then killed by the 9/11 cover-up team. All of these brave patriots deserve our attention.

Assange, the whistleblower who gets the most publicity in the mainstream media, is also the most controversial. Many of the best alternative media analysts, including Gordon Duff of VT, believe that Assange and Wikileaks have friendly relations with the Israeli Mossad. This explains, they say, why the material publicized by Wikileaks has never seriously damaged Israel, never exposed the Zionist-run false-flag operations of 9/11, 7/7, Madrid, Bali and Mumbai, and never targeted the Zionist-dominated organized crime syndicate that controls much of the US financial, political, and judicial apparatus.

Even worse, these analysts say, Assange has “revealed” false information designed to serve the Israeli agenda. Wiki-leaked “diplomatic communications” accused Gen. Hamid Gul, a principled 9/11-truth-exposing Pakistani officer, of “quarterbacking the Taliban.” Blaming Pakistan for all the Zionist-instigated mischief in South Asia is a key strategy in the Zionist information war. (Zionists also are major shareholders in the heroin and energy pipeline projects that motivate the US war on Afghanistan.)

Assange’s Wikileaks also published material suggesting that the leaders of Saudi Arabia strongly support a prospective US-Israeli attack on Iran. Like the material libeling Gen. Hamid Gul, these documents painted a false picture that served the Zionist agenda – in this case, the failed Israeli attempts to isolate Iran and trick the US into waging war on that country.

Defenders of Assange and Wikileaks argue that it was the media, not Assange himself, that was responsible for selectively reporting items from among the millions of documents put out by Wikileaks. But by partnering with treasonous Zionist outfits like the 9/11-coverup-complicit New York Times, and bad-mouthing 9/11 truth, Assange leaves himself open to charges that his work serves the Israeli agenda.

If Wikileaks really has been working for Israel, that would explain why Assange has gotten so much easy publicity in the Western media. More important whistleblowers of unimpeachable integrity, such as Bradley Manning, Gary McKinnon, Sibel Edmonds, Susan Lindauer, Gwenyth Todd, and Barry Jennings, have garnered only a fraction of the publicity that Assange has drawn.

Bradley Manning, Assange’s biggest source, seems to have been motivated by a genuine revulsion at US war crimes in Iraq and Afghanistan. Manning’s leaks included videos showing the indiscriminate slaughter of civilians by war criminals disgracing US uniforms. His thanks for exposing these and other crimes has been imprisonment, often under horrific conditions, since 2010. His trial is expected to begin sometime this month.

Like Manning, Gary McKinnon still faces the threat of long-term imprisonment. McKinnon, a computer whiz, hacked into US military computers from his home in Scotland in 2002, and was later accused of perpetrating “the biggest computer hack of all time.” (The US is still trying to extradite McKinnon from the UK.)

Gary McKinnon’s case has been under-reported in the mainstream media, and when it is reported, McKinnon is usually discredited as a conspiracy nut suffering from Asberger’s Syndrome. Such reporting, ironically, serves the interest of McKinnon’s defense team, which is trying to get him off by playing for sympathy and downplaying the significance of his hacking.

In fact, McKinnon is a planetary patriot who allegedly sought, and found, evidence of official US complicity in the 9/11 attacks, as well as evidence that the US military and NASA are suppressing zero-point energy technology. (Those who doubt that 9/11 was an inside job, or that zero-point energy is real, should google “WTC-7 smoking gun” and “Disclosure Project,” and read Nick Cook’s The Hunt for Zero Point.)

An even more important whistleblower is ex-CIA asset Susan Lindauer. Though Sibel Edmonds and Colleen Rowley have gotten more publicity, America’s most dangerous female whistleblower may be Lindauer, who personally witnessed and participated in the CIA’s detailed foreknowledge of the 9/11 attacks. Lindauer has testified that her CIA handler, Dr. Richard Fuisz, repeatedly discussed with her the forthcoming attacks in Lower Manhattan during the months before 9/11. And on 9/11 itself, Lindauer says, Fuisz began screaming uncontrollably about “the goddamned Israelis” while watching the controlled demolition of the Twin Towers on live television.

In 2005 and 2006, Susan Lindauer was indefinitely detained under the Patriot Act. She was locked in solitary confinement for a year at Carswell Air Force Base in retaliation for her attempts to blow the whistle on 9/11 and the 9/11-triggered wars on Afghanistan and Iraq. Rather than assassinating her, the 9/11 criminals in the US government attempted to kill her credibility by deeming her “mentally disturbed.”

Gwenyth Todd, a former high-level White House and military advisor, is another brave American whistleblower who has been smeared to prevent her message from being heard. She stopped a 2006 neocon plot to stage a false flag attack in Bahrain intended to trigger war on Iran, and had to flee for her life to Australia. Ms. Todd revealed this week on my radio show that she has had the misfortune of working with Israeli spy Richard Clarke, the former “terror czar” of the Clinton and Bush administrations; Todd agrees with historian Webster Tarpley and others that Clarke may have been the architect and controller of the 9/11 false-flag events. Listen to her stunning revelations here: Interview with Gwenyth Todd

Another 9/11 whistleblower, Barry Jennings, was not as lucky as Todd and Lindauer. Jennings was a witness to the pre-demolition explosions that gutted the interior of World Trade Center Building 7 on 9/11, before either of the Towers had collapsed. His testimony helped falsify the official story of what happened to WTC-7. In August 2008, on the eve of publication of NIST’s long-overdue, utterly ridiculous report crediting the demolition of WTC-7 to small office fires, Jennings was smeared by the BBC, and (almost simultaneously) assassinated by unknown parties. There is no official cause of death, and private detectives will not investigate the case for fear of endangering themselves and their families.

All of the above whistleblowers have suffered severe consequences for publicizing US government secrets. The government is trying to dissuade others from following in their footsteps.

But that “government” no longer has any legitimacy. It was complicit in the murder of almost 3,000 Americans on September 11th, 2001. It has waged two criminal wars of aggression, and abolished the Bill of Rights – the heart of the US Constitution. It is no longer a government, it is a criminal syndicate. And 99% of its “secrets” are classified to deceive the American people, not foreign enemies.

Under the circumstances, every American, and every citizen of planet earth, needs to publicize every US government secret they can get their hands on – especially those that would reveal the Zionist global crime syndicate’s control of compromised US leaders like Richard Clarke. Anyone who has access to these US government secrets, and who is not making every possible effort to expose them, is supporting the criminal 9/11-complicit regime and thereby committing a crime against humanity. By ripping up the veil of secrecy, and exposing these secrets, we can effect a nonviolent revolution – a revolution aimed at re-establishing transparent, Constitutional governance in the USA.

If you have any state secrets that deserve to be revealed, send them to me, Dr. Kevin Barrett, kbarrett(at)merr(dot)com, and I promise to do my best to publish them – even if I am threatened with life in prison, death, or worse. I urge all of my readers to make the same pledge on their own websites, blogs and social media pages.

Together, we can peacefully destroy the Zionist-dominated National Security State that has overthrown Constitutional governance in the USA. In so doing, we will be saving millions of lives. For those who make this peaceful revolution impossible will, as JFK said, make violent revolution inevitable.