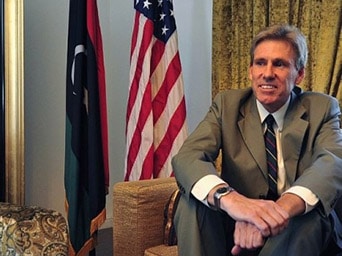 As an American and as a Muslim, I could not but feel the pain and loss the family of the late Ambassador Chris Stevens, Sean Smith and other officials feel for the lost of their loved ones. I feel the loss of my nation America and my people Americans and Muslims loss and sadness a result of this sad and tragic loss and I feel the shame that all those responsible for the murder should feel.

Simply, there are no excuses whatsoever for the criminal and armed attacked directed against the American consulate in Benghazi or the attack on the American embassies  in Cairo, in Sanaa among other places. It seems Sam Bacile and his sponsors succeeded in what they set out to do, put America and Americans in harms way.

However, we must also look at the relentless attack and defamation committed daily by Jewish and Zionist organizations and individuals against Muslims and Arabs and non Jews. In Europe even in the US, the Jewish lobby succeeded in putting in place legislation that impose jail sentences and financial fines against those who doubt or raise questions about the Holocaust, succeeded in creating an atmosphere of fear among politicians, among media certainly among academia with any one deemed anti-Israel risk the loss of job and status. It is OK to defame God and HIS prophets and messengers,  but not raise doubts about the Holocaust or criticise Israel. However these Zionist Jews feel it is OK if they defame others and defame religious symbol because they know they can get away with it and can get away with murder, a murder like that of Ambassador Stevens

The film produced and directed by the Israeli Jew Sam Becile and funded by some 100 American Jews played to empty seats in Los Angeles with no artistic value and is of no consequences to the value nor to the belief of Muslims. Certainly the film does not represent the American values of tolerance and freedom of speech and expression. Sam Becile and these 100 Jews have every right to make fools and “asses” of themselves in the same way the Nazi propagandist Joseph Goebbels did when he made it his business and mission to demean Jews.

The film according to its producer and director was and is intended to incite hate against Muslim which is not so surprising since these guys and many tens of thousands of them are only too happy when Muslims are incited to anger and take their revenge against Americans and America.

They simply love it when American blood is spelled. And they have contributed to the spelling of American, Jewish, Arab and Muslim blood for so long and they have the funds and the connections within the administration, within the Congress, within the media, within Hollywood, certainly within academia to just do it.

Sam Becile and these 100 Jews are but a small part of a nation wide network of American Jewish Zionist organizations well funded and dedicated to incitement of hate. They have been doing it for a long time and they became more viscous since September 11 perhaps to cover the involvement of Israel and its Fifth Column in September 11th.

Sam Becile and these 100 Jews equally share in the spelling of innocent American blood with those criminals who attacked the US Consulate in Benghazi.

Muslims around the world are warned not to fall into this trap set up by American Jewish Zionist groups and must understand and know that America has nothing to do with this incitement of hate nor defamation of religion or its symbols.

Reverend Terry Jones is simply a NO BODY and he made a name for himself when he announced his intentions to burn copies of the Holy Quran. Terry Jones can only represent the scumbags of America and yes there are many of them too.

Muslims must learn to behave in the ways of the Holy Quran which forbids the harming of foreign guests and emissaries of foreign nations and need to learn to celebrate life not death, celebrate building nations not destroying it.

This behavior of the mob in Benghazi is no different from the behavior of Sam Becile and that of Terry Jones. Civility is an art and a culture and a learned behavior and we all must learn to be civil among our self and with others, and accept and tolerate difference of opinions and difference of cultures and faiths. We all must learn that demeaning others is demeaning of our self and insulting other faiths and symbols of faiths is also an insult to ours elf.

Let us hope that no more blood is spelled as a result of this film. If we are to send a message to Sam Becile and these 100 Jews, then we must send a message of condolences to the family of the late ambassador and his colleagues, and the American nation and people.

Yes, perhaps it also time for the American government and the nation to apologies to Arabs and Muslims for the millions it killed and for the nations it destroyed and the tens of millions exiled and whose life it destroyed forever. Yes, Jewish Zionism is an evil that is killing innocent people and putting America and Americans in harms way. Question is when America will wake up and get rid of this cancer that is destroying the way of life for America and people around the world? Islam and Muslims are not the enemy of America, the real enemy is Jewish Zionism.