Home Veterans Abunimah Did It Again 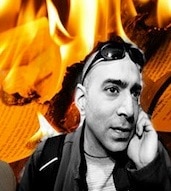 Is it really possible that not a single Palestinian or Palestinian solidarity activist would stand for Greta Berlin, one of the founders of the Free Gaza Movement and its spokesperson for the last several years? Is it possible that not a single peace activist would rush to defend the person who was directly and physically involved in every naval attempt to break the siege on Gaza? Apparently, yes.

A few days ago Greta Berlin had been subject to a vile Israeli and Zionist smear campaign following her facebook post containing the following message: “Zionists operated the concentration camps and helped murder millions of innocent Jews”. Berlin also added to her facebook post a link to a video of a lecture by Eustace Mullins. I am not familiar with the work of Mullins but I guess that he is far from being a popular political thinker in Tel Aviv or Golders Green.

Zionists and Hasbara agents were very quick to slander Berlin. They tagged her as an ‘anti Semite’ and a ‘Holocaust denier’. But clearly there is no Holocaust denial in Berlin’s message. Furthermore, the views expressed by her are consistent with many experts including Jewish Marxist archivist Lenni Brenner who tells the same story in his book 51 Documents: Zionist Collaboration With the Nazis. Hanna Arendt also reached a similar conclusion in her invaluable epic book A Report On The Banality Of Evil. I guess that Greta Berlin has a problem, unlike Arendt and Brenner: she’s not a Jew, she is a Shiktze, and Shiktzes better keep quiet. They are not supposed to talk, let alone tell the truth.

It didn’t take much Zionist pressure before the Free Gaza Movement grovelled and published a humiliating apology. It also didn’t take much time for the usual suspects within the movement to disassociate themselves from one of the most dedicated solidarity activists on the planet.

Yet, one would expect that after his recent failed attack on myself and my work, Kosher Commissar Ali Abuminah, would think twice before he allies himself with the darkest Zionist and Israeli Hasbara forces around.

Apparently, the man who managed to reduce the Intifada to an electronic outlet did it again. Today the dedicated Sabbath Goy criticised Berlin in the name of “trust and honesty.” It is almost funny considering the fact that Abunimah’s integrity record is probably one of the lowest in the history of resistance in general.

On top of being intellectually lame as clearly shown in the following video, the man also lacks some basic academic skills.

Just 48 hours before slandering my writing and my recent book, Abunimah was stupid enough to admit to Professor Norton Mezvinsky that he actually had never read anything by me. Today, once again, Abunimah proved that he doesn’t grasp the notion of history in general and certainly far from being familiar with the historicity of the Holocaust in particular.

Three weeks ago, Paul Larudee, another founding member of the Free Gaza movement, published a crucial expose that proved beyond doubt that BDS has given up on Palestinian Right of Return. A few days later, Nahida Izzat, my favourite Palestinian poet, published an urgent alert on the Uprooted Palestinian website:

“The BDS clearly changed its goal statement. BDS has given up on the most essential and crucial Palestinian principles.” She wrote.

But Ali Abunimah and his Electronic ‘Intifada’ remained silent. If Abunimah had a drop of integrity in his system he would have taken the challenge and discussed the BDS’s goal statement’s recent change. But Abunimah who has the audacity to preach us today on “trust and honesty” decided to shove the core Palestinian issue under the carpet.

The meaning of it all is pretty simple. As I disclose in my latest book The Wandering Who, there is a devastating continuum between hard core Zionism, Israeli Hasbara and the Jewish so-called ‘left’. Unfortunately, some Palestinians also operate as Sabbath Goyim. And they better be exposed.

It indeed didn’t take us by surprise to learn that Jewish Voice For Peace withdrew its support from Greta Berlin’s book tour and that Naomi Klein resigned from the board of Free Gaza. Needless to say that when I heard about the Zionist slandering of Greta Berlin I thought to myself that within less than a week Abunimah would join the party. I was wrong, in fact it took him less than 24 hours.

I don’t know who Abunimah’s pay masters are, but I guess it ain’t the Islamic Jihad.