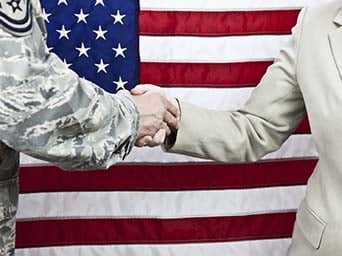 WASHINGTON, Oct. 15, 2012 – A senior defense official took part today in the announcement in New York of a new hiring program that aims to train and place 100,000 veterans in advanced manufacturing and related jobs by 2015.

John R. Campbell, deputy assistant secretary of defense for warrior care and transition policy, joined officials from General Electric, Alcoa, Boeing and Lockheed Martin as they announced a partnered effort with the Manufacturing Institute to fast-track veterans into manufacturing jobs or skills training.

The “Get Skills to Work” program, according to GE chairman and CEO Jeff Immelt, seeks to match veterans with some of the more than half-million unfilled high-tech manufacturing jobs in the United States. Veterans, a million of whom are expected to leave service in the next four years, have the teamwork skills and personal values to make them successful in manufacturing, he said.

The program will offer veterans an online skills assessment and badging system for those who are already qualified for high-tech manufacturing jobs, and will train other veterans through partnerships with community colleges and technical training schools in 10 states, Immelt noted.

GE officials said the first class of veterans will enroll in January at Cincinnati State Technical and Community College in Ohio, near GE Aviation’s manufacturing hub.

Campbell, a Marine Corps veteran who served from 1967 to 1970, is the Pentagon’s senior official responsible for ensuring that wounded, ill, injured and transitioning service members receive high-quality services, including the tools they need to re-enter civilian life successfully.

“Something very interesting happens when a veteran enters the workplace,” he said. “I call it the vet effect: leadership, teaming, personal values that course through a company’s DNA. Something really magical happens.”

Campbell said that when he left the Marine Corps and took a job with J.P. Morgan, he didn’t have to worry about proving the value of his military experience – the company’s chairman and several other senior executives also were veterans, he noted.

“It’s much different today,” he added.

“When 1 percent of this country is serving or is connected to the military,” Campbell said, “and we have so many that don’t really know there’s a war, … it’s really incumbent on programs like ‘Get Skills to Work’ to show what these terrific young men and women … [are] capable of doing.”

He noted the Defense Department partners with the departments of Veterans Affairs, Labor, Education, and Homeland Security, along with the Office of Personnel and Management and the Small Business Administration, on the redesigned Transition Assistance Program, called Transition GPS.

The government agencies involved are working to make Transition GPS “a new program that is really going to be 21st century in its thinking and … its outreach,” Campbell said. He noted VA Secretary Eric K. Shinseki and Defense Secretary Leon E. Panetta are both “committed to making sure veterans are ‘career ready,’ and their departments are also involved in spouse employment efforts.

“On some days, I think we’re doing all we can; other days I think we can do more,” he said. Public-private partnerships such as “Get Skills to Work” can help target specific manufacturing needs in communities with large veteran populations, he added.